A night in a hotel room means you’re away from home. Perhaps it’s a holiday, a work trip, or some kind of special occasion, and it feels a little out of the ordinary. It’s no wonder, then, that filmmakers choose the hotel room as the set for the many iconic moments of their movies.

To celebrate some of the most famous hotel rooms from film, we have created a series of unique floor plans to delight film buffs and travelers alike.
[/full-width-paragraph]

Julia Roberts and Richard Gere became household names with this Hollywoodized take on the Pygmalion myth set in Los Angeles. It takes place in a Los Angeles hotel, and much of the pleasure of the film comes from watching Roberts living the luxury life in the unfamiliar setting of the Beverly Wilshire.

The hotel’s Art Deco and Beaux Arts interiors conveyed the opulence of Edward’s millionaire lifestyle. But beneath the bling, Vivian and Edward’s room just looked like the perfect place to relax and fall in love in Beverly Hills.

Can you book a room? Yes! You can book a room at the Beverly Wilshire and bring the scene to life.
[/full-width-paragraph] 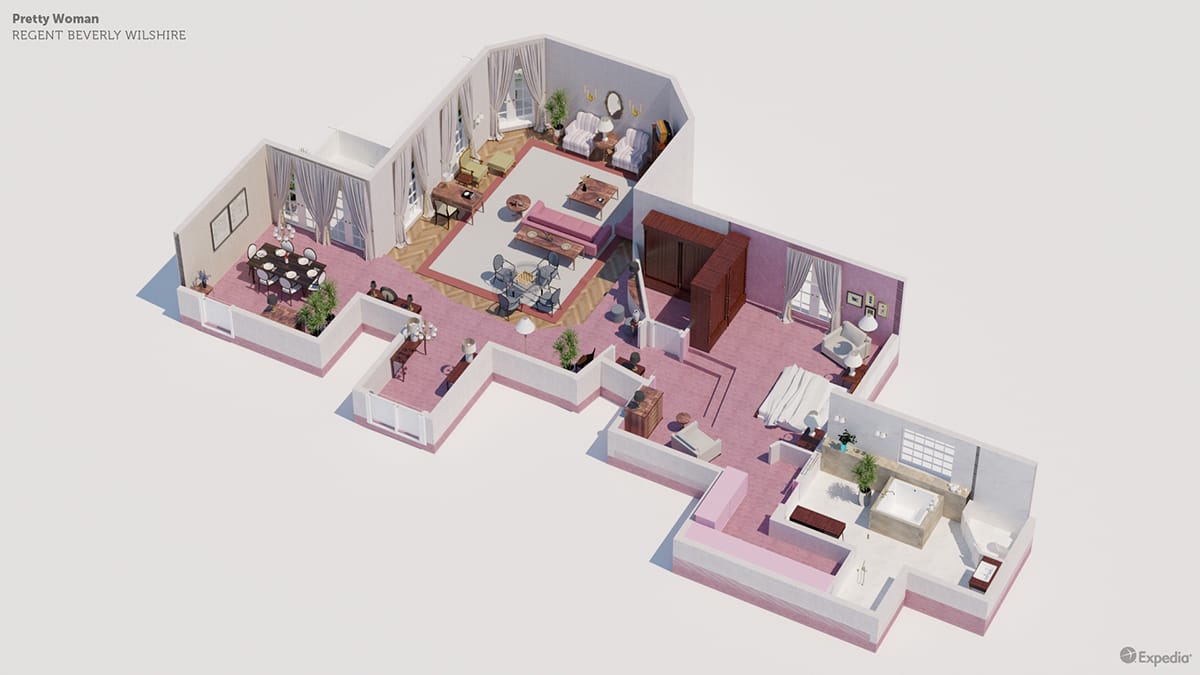 It’s rare to find a 500-square-foot hotel room in Japan’s capital, but Park Hyatt Tokyo has them. A giant bed with great views out across Tokyo is the perfect setting to think about the beautiful melancholy of existence.

Can you book a room? It goes without saying, yes, you can stay at this Tokyo hotel.
[/full-width-paragraph] 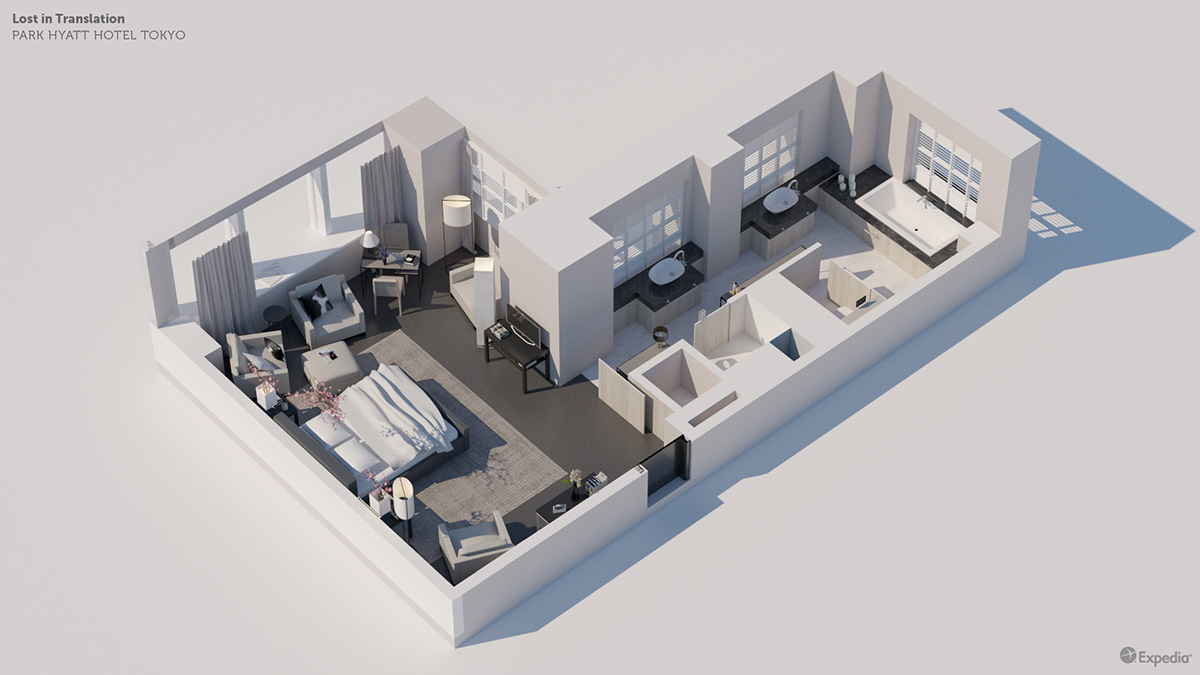 King among famous hotels, the one from The Shining has captivated movie lovers for nearly four decades. On the one hand, some believe the endless scenes of Danny tricycling around the hallways are director Stanley Kubrick’s way of mapping the space for viewers. On the other hand, fans have noticed that the layout of the hotel is spatially impossible. This just adds to the eerie feeling of the film.

But The Majestic Yosemite Hotel isn’t haunted – honestly! Previously known as Ahwahnee Hotel, The Majestic is a very peaceful place, thoughtfully set in one of the most popular national parks in California, and designed with fascinating Native American features and artistic flourishes.

Can you book a room? You can reserve a room at this hotel to relive some of The Shining. If you prefer to stay at the hotel they used in the Shining to film the outside, you’ll find it in the Timberline Lodge in Oregon.
[/full-width-paragraph] 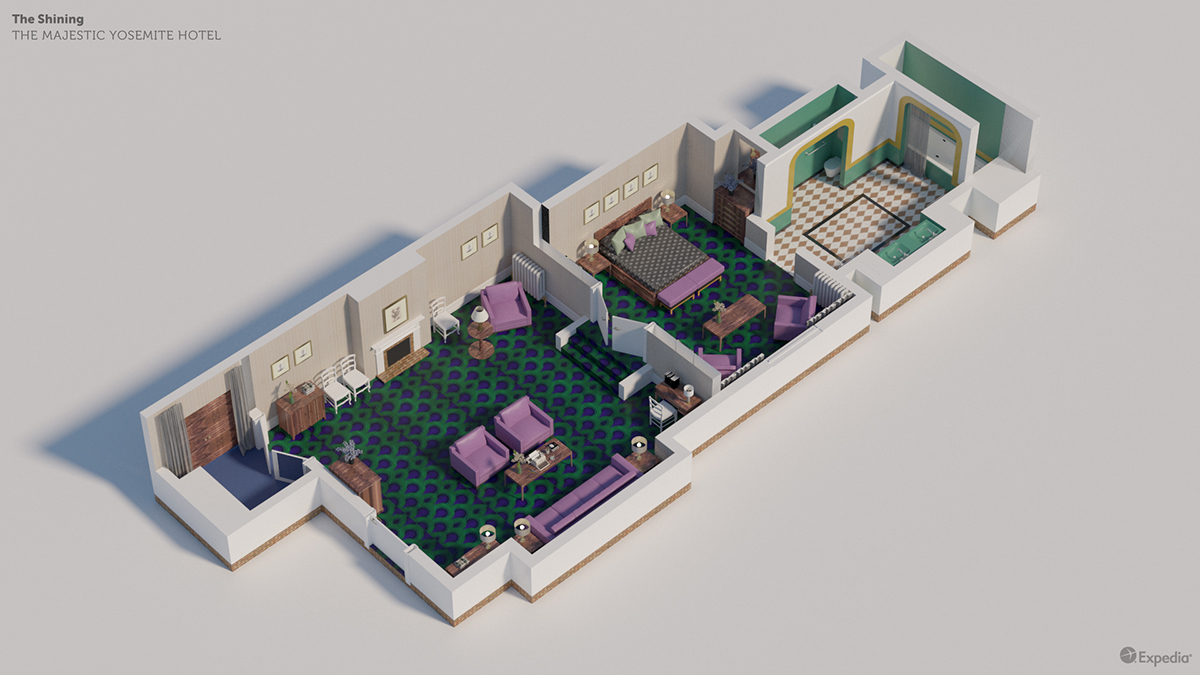 Fontainebleau Miami Beach hotel rooms are etched into the memories of Bond fans as setting the scene for where Sean Connery found that his girlfriend had been painted to death with gold leaf. In reality, that scene was shot on a sound stage at Pinewood Studios in the UK.

But the hotel remains an iconic landmark and one of the most famous hotels in Miami Beach today. In fact, it’s also featured in films as diverse as Scarface (1983) and Police Academy 5 (1988). The front rooms overlook Miami Beach and the rear ones peer over Indian Creek to Pine Tree Park.

Can you book a room? Yes! Apart from the grandeur of fame, you’ll also be close to the sand if you reserve a room here.
[/full-width-paragraph] 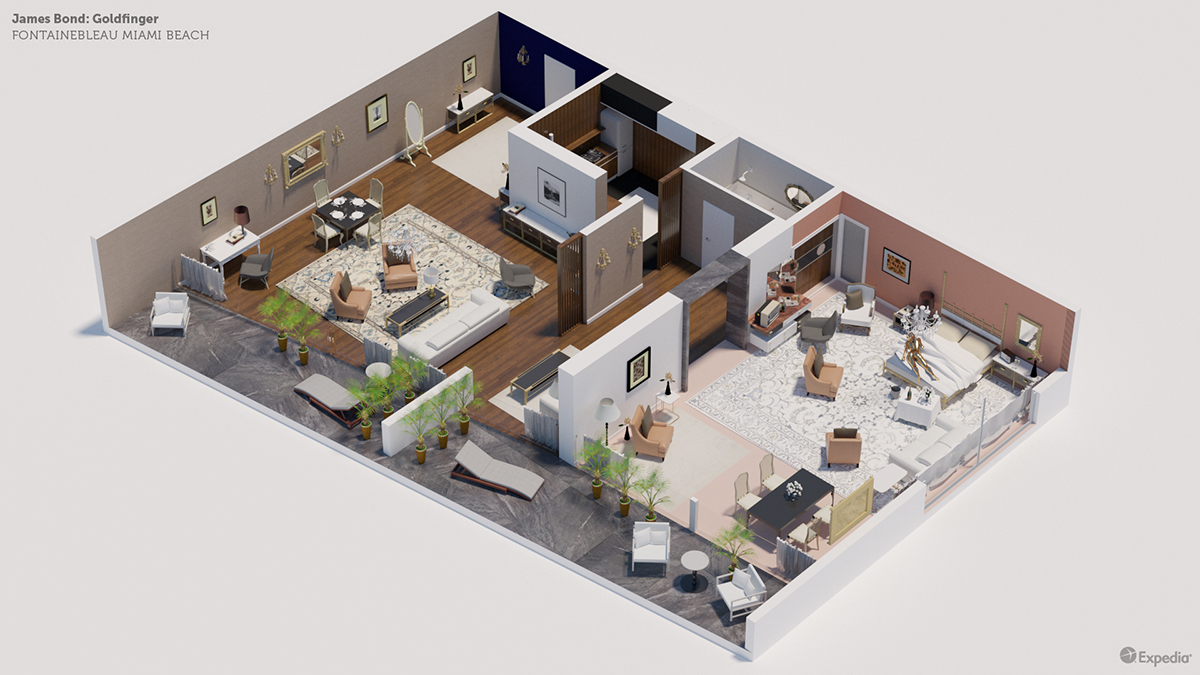 5. Fear and Loathing in Las Vegas

The Ambassador hotel was the location for the Academy Awards for 6 years, and famously was the place where presidential candidate Robert F Kennedy was assassinated. Even among other notable hotels in Los Angeles, it was a hot-spot for celebrities. Rudolph Valentino, Charlie Chaplin, Joan Crawford, and Errol Flynn were among those who could be spotted drinking at the hotel’s nightclub, even during prohibition!

The Ambassador Hotel’s faded grandeur achieved its last hurrah as the backdrop for Terry Gilliam’s psychedelic Hunter S. Thompson adaptation in 1998 and was demolished in 2005.

Can you book a room? Sadly, it’s not possible. Still, if you’re traveling in the author’s footsteps, then you should probably look for Las Vegas hotels anyway!
[/full-width-paragraph] 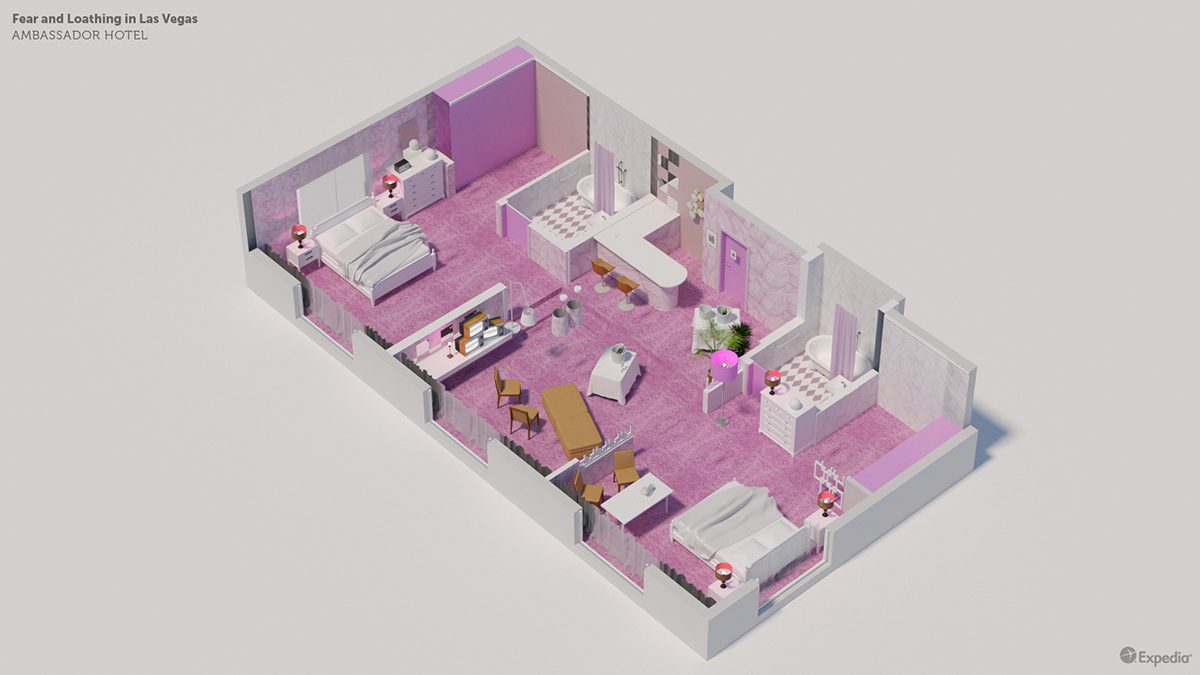 Wes Anderson’s short prologue to The Darjeeling Limited is an overlooked gem. Hôtel Raphael on Avenue Kléber stood in for the fictional Chevalier, and although the characters never leave the room they might have taken in a panoramic view over Paris had they ventured to the rooftop terrace.

The director’s trademark vintage aesthetic is reflected in the traditional, love-worn, but opulent conditions of Jason Schwartzman and Natalie Portman’s luxury hotel room. If you’re choosing between the Chevalier and the Darjeeling for your summer break, this is definitely the comfortable option.

Can you book a room? Well, yes! Alternatively, there’s no shortage of famous Paris hotels and little boutique marvels dotted throughout the city.
[/full-width-paragraph] 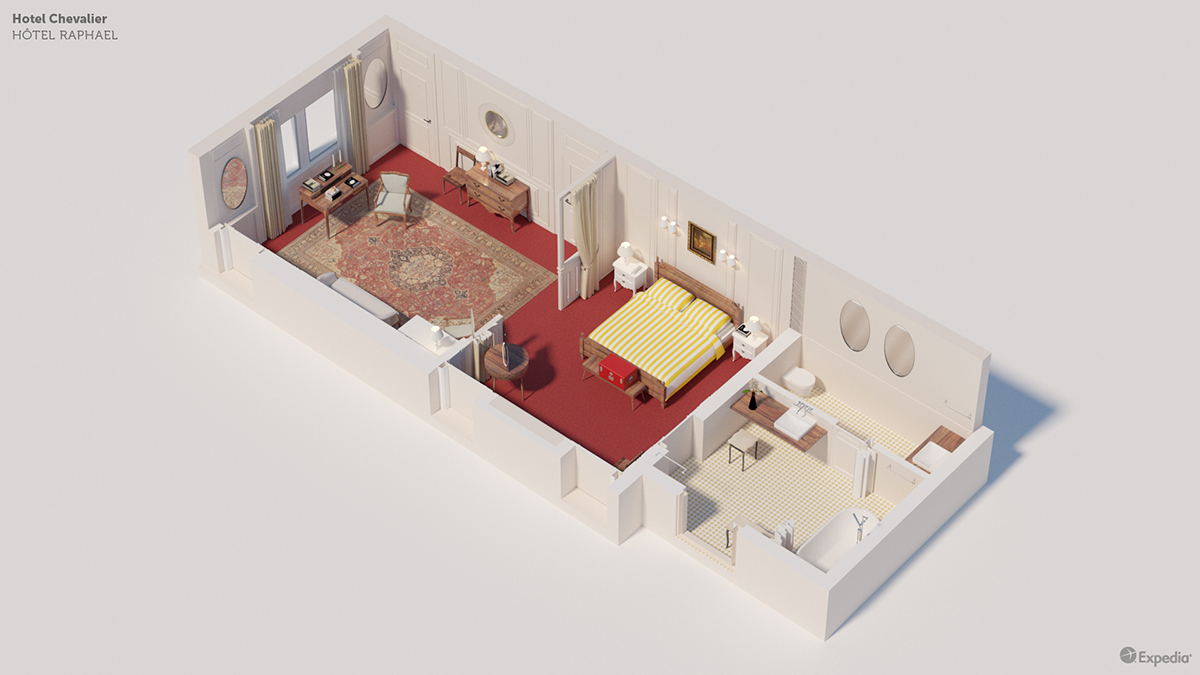 “This isn’t the real Caesar’s Palace is it? Did, umm… did Caesar live here?”

Well, no. But if the old emperor joined you on a bender in Vegas today, he’d certainly feel at home among the Roman-inspired art and architecture of the Caesars Palace suites. The marble bathroom will make you feel like winners, and if Caesar stays sober enough it’s only a short stumble to the Garden of the Gods Pool.

The Hangover reinvigorated the already famous Vegas hotel, and contributed to the cadre of remarkably re-watchable movies.

Can you book a room?  Best of all, you can stay at Caesar’s Palace if you’re ready to party.
[/full-width-paragraph] 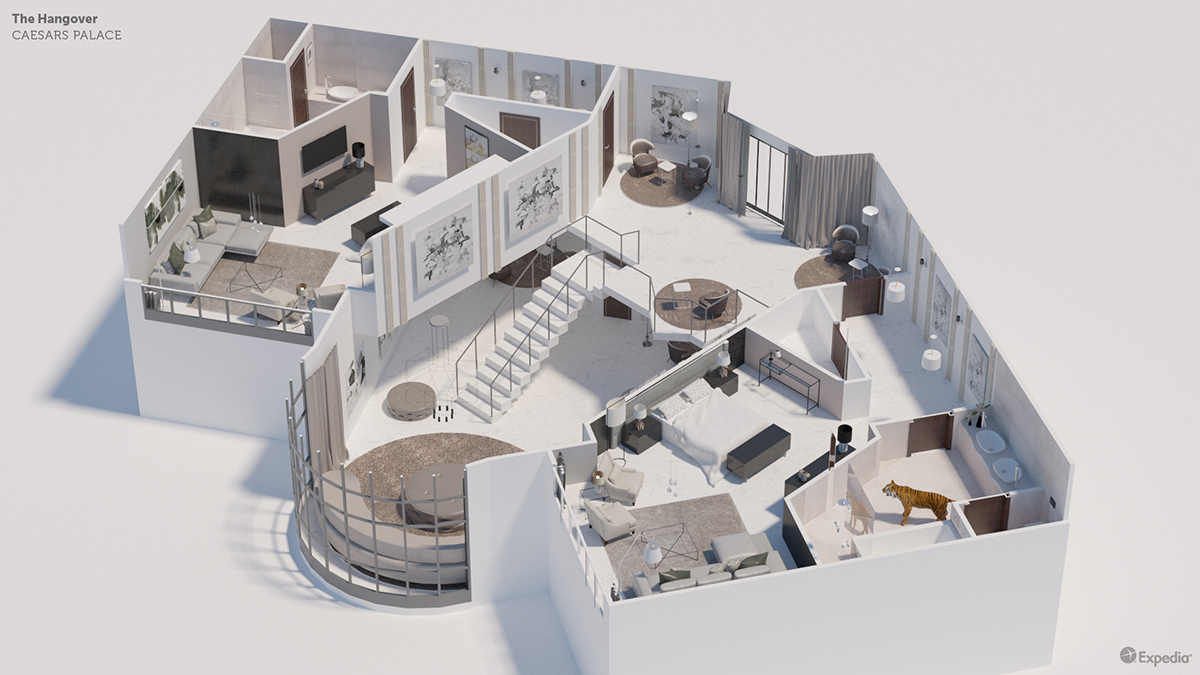 Why should movie characters have all the fun? Check in to one of these famous hotel rooms from film to get the movie star treatment in real life!

Eddy, M. (2011). Spatial Impossibilities Made The Shining Even Creepier. Themarysue.com

From adventure to mindfulness, to trying new things and putting our phones away, these are the biggest travel trends you'll see in 2022.