9 Star Wars locations you can visit in real life

With the teaser reveal of the newest Star Wars film, The Rise of Skywalker, and the conclusion to the epic nine-part saga coming in December, we thought we’d celebrate this year’s official Star Wars Day by presenting you with nine Star Wars planets (and moons) you can actually travel to—and a few honorable mentions!

We’ve got a good feeling about this.

Episode I – The Phantom Menace 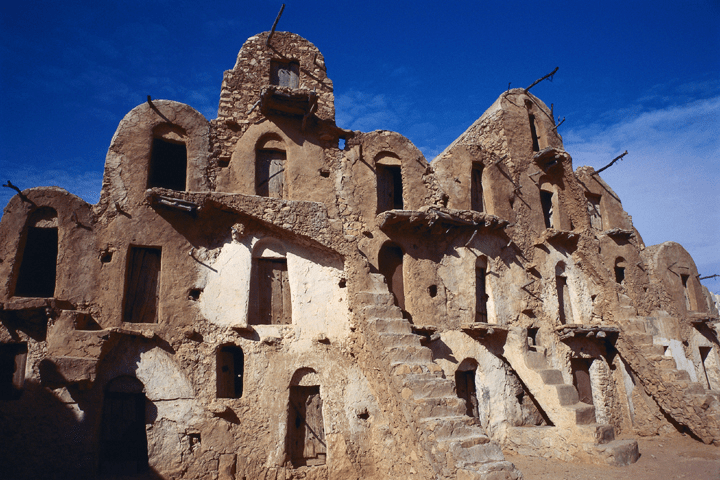 Let’s go back to the beginning to where Anakin Skywalker lived as a boy. In The Phantom Menace, we learn that Anakin spent his childhood in Mos Espa with his mother Shmi—both slaves under the ownership of Watto. Ksar Ouled Soltane was featured in some of the scenes to represent the slave quarters of Mos Espa. Ksar Ouled Soltane is a fortified granary, or ksar, located in the Tataouine—inspiration for the planet’s name of Tatooine—district in southern Tunisia.

The Mos Espa film set is located by the Sahara dunes in Chott el Gharsa, and beside it is the Yardangs, where Queen Amidala’s Royal Starship landed, and where Qui-Gon Jinn first fought against Darth Maul.

Now a tourist destination, visitors come to see Ksar Ouled Soltane’s well-preserved granary vaults. You can travel to Ksar Ouled Soltane, pass by the city of Tataouine, visit the Mos Espa film set and more during an epic 7-day tour with Tunisia Tours.

Episode II – Attack of the Clones 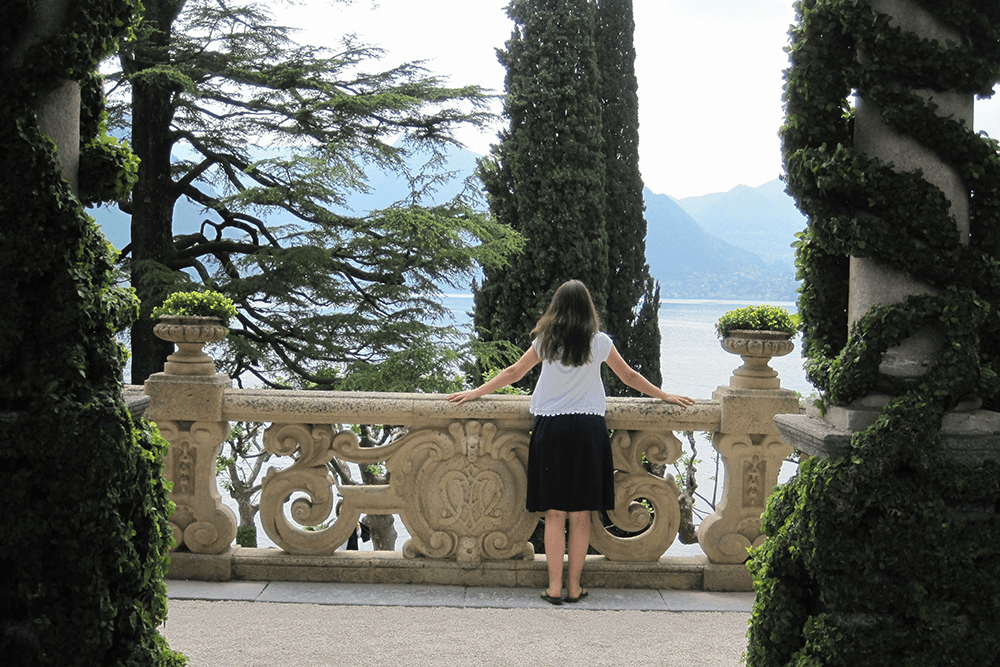 The Naboo Lake Retreat where Anakin Skywalker and Padmé Amidala go into hiding in Attack of the Clones is located at the Villa del Balbainello in Lenno, Italy. The grand building overlooks Lake Como and was also used as the setting for Anakin and Padmé’s wedding at the end of the film.

Appropriately, this dreamy locale is a popular venue for real life weddings as well. But if you’re not looking to tie the knot with the Anakin to your Padmé, you can book a full day tour and embark on a boat cruise to relax and admire some of Lake Como’s most beautiful natural scenery and stunning villas. Then, disembark at Villa del Balbianello for a guided visit.

Bonus: A number of films have used the villa for location shooting, including Casino Royale.

Episode III – Revenge of the Sith 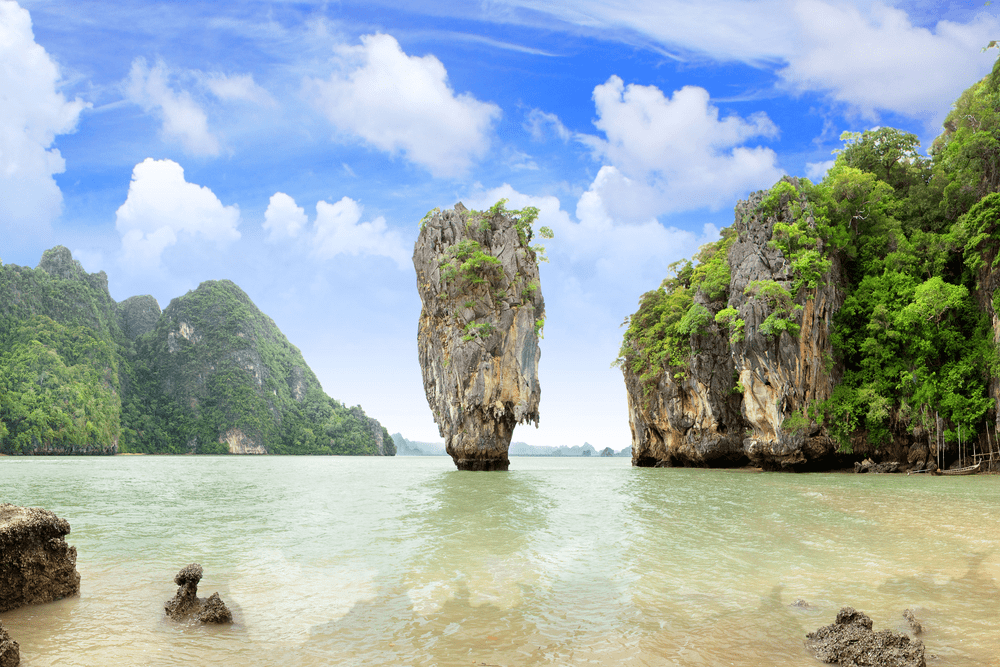 If you ever wanted to visit the home of the Wookiees, Phang Nga Bay near Phuket, Thailand, is the closet you can get. In Revenge of the Sith, the bay was used as the backdrop for the planet Kashyyyk. Aerial footage of limestone karst mountains was composited into the film for the arrival at the Battle of Kashyyyk.

Known for its incredible limestone rock formations, this bay between Phuket and Krabi is a national marine park where visitors can explore caves and shallow waters via canoe. You’ll also recognize another movie moment at its most famous landmark Koh Tapu, also known as James Bond Island, featured in the film The Man with the Golden Gun. 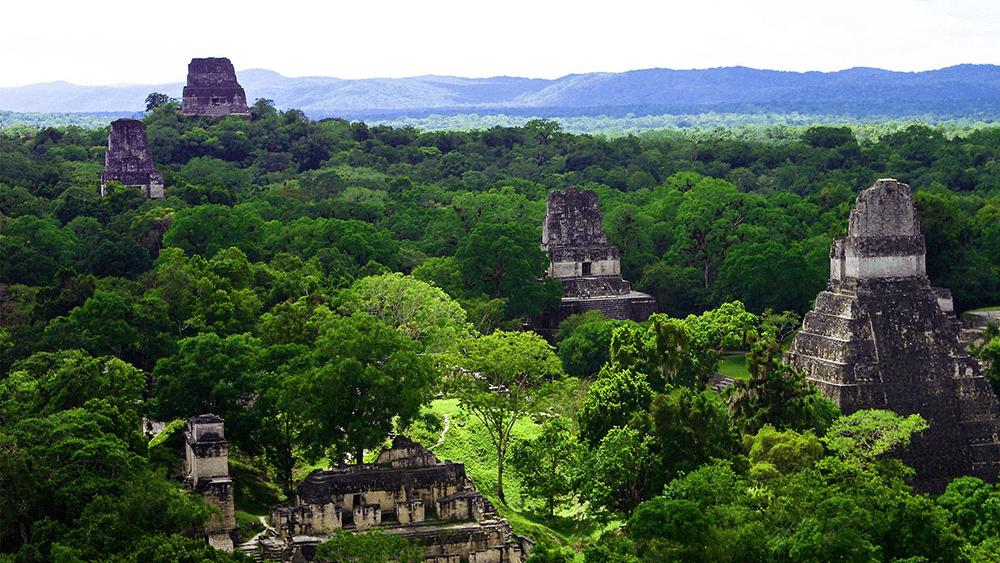 Yavin 4: The home of new hope. The Rebel Alliance’s base, set up in the ancient Massassi ruins, was filmed at the real-life Mayan temples in Tikal, Guatemala. George Lucas reportedly chose Tikal when he saw a poster of the site at a travel agency. (We like your style, Mr. Lucas). This inspired him to send a film crew to Guatemala in March 1977 to shoot scenes.

With an age-old temple that rises an incredible 154 feet into the air, Tikal an impressive site in-and-of-itself. Add in the location’s significance to the film, and it becomes an absolute must-see for any Star Wars or travel enthusiast.

Start your adventure with a day tour where you can explore Guatemala’s Mayan city of Tikal. Follow a local guide to the site’s famous landmarks, see the tropical wildlife in the Central American jungle, and imagine yourself in a galaxy far, far away.

Episode V – The Empire Strikes Back 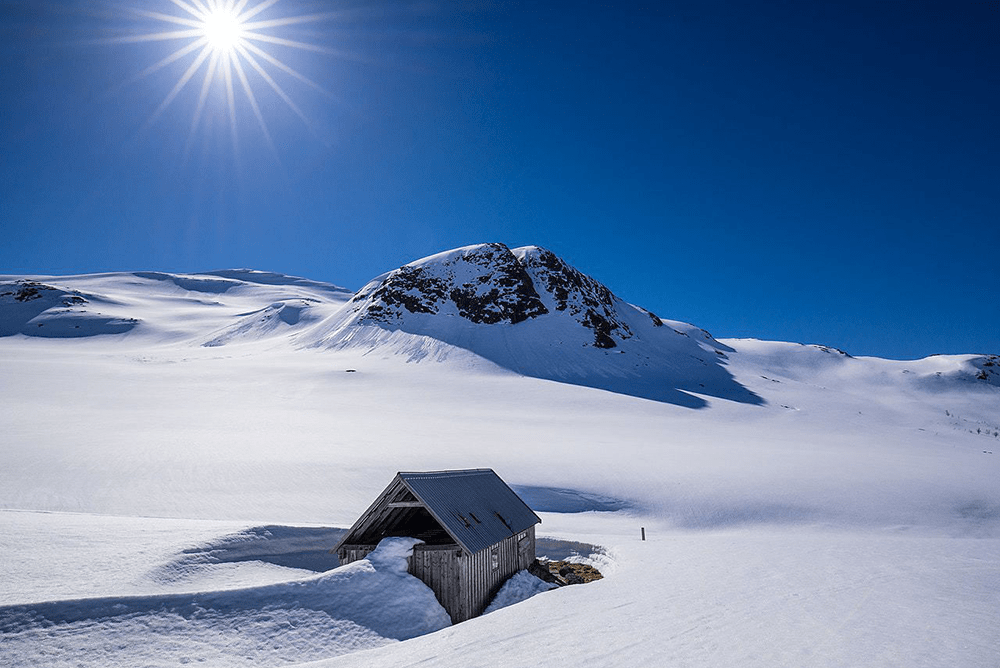 From lush jungles to a snowy wasteland … One of the most notable battles in the entire saga is without a doubt the Battle of Hoth in The Empire Strikes Back. After abandoning their base on Yavin 4, the Rebel Alliance moved to the remote ice planet to avoid detection from the Empire, until they were discovered by Imperial probe droids. Cut to Alliance’s snowspeeders and group troops vs. the Empire’s massive AT-AT walkers in classic Star Wars fashion.

So where can you go to reenact this wintery war? The scene was filmed at the Hardangerjøkulen Glacier in Norway. Although not quite as intergalactic as the planet of Hoth, the 9.9-mile ice sheet does have a rather alien quality to it. The glacier can be found in the Ulvik municipality, and can be accessed from the village of Frise, which in turn can be reached pretty easily from the area’s other settlements.

If you’re not up for hiking, a scenic train can take you between Bergen and Olso; so while you don’t go to the Glacier, you can get a feel passing through the snowy landscape. We highly recommend it.

Episode VI – Return of the Jedi 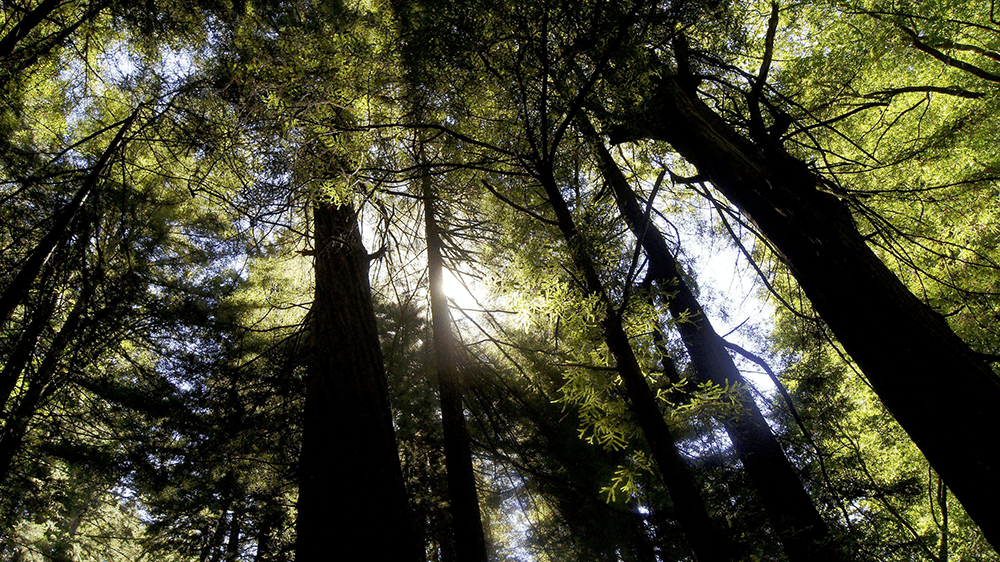 The forest moon of Endor was the battleground for the crucial, climactic clash of the original trilogy in the Return of the Jedi. It was during the Battle of Endor that we saw the Rebel Alliance team up the fury little native species, the Ewoks, to overrun the Imperial positions and destroy the shield generator, rendering the Death Star II vulnerable; all this leading to the death of Darth Vader and the Emperor, and the beginning of the demise of the Empire.

To visit the real-life Endor, you don’t have to go farther than the majestic Redwood National Park in northern California. Any Star Wars fan will instantly recognize the towering, lush trees and celestial fog.

Fast forwarding 30 years after the original trilogy, The Force Awakens introduced us to new characters and new planets. The enchanted woodlands of Puzzlewood was used as the backdrop for an intense meeting between Rey and Kylo Ren in the forests of Takodana—a pivotal moment that truly sets the sequel trilogy in motion.

Located in the Forest of Dean in Gloucestershire, England, Puzzlewood has an otherworldly and ancient atmosphere that conjures up thoughts of fairy tales and magic—one of the reasons why it’s such a popular film location. Before Star Wars, Puzzlewood supposedly inspired J.R.R Tolkein and J.K. Rowling in creating forests in The Lord of the Rings and Harry Potter. It is also a regular location for the popular British TV series, Doctor Who.

Skellig Michael is featured in the dramatic final scene of The Force Awakens, but it plays a much bigger role in The Last Jedi when it’s revealed to be the sacred island of Ahch-To, the site of the first Jedi Temple—and Luke Skywalker’s refuge. After a tragic series of events involving his nephew Ben Solo (now Kylo Ren), Luke sought out the uncharted world and made it his place of exile. That is, until the Resistance pieced together a map of his location and sent Rey on a mission to find him.

If you’re considering a journey to Ireland’s Outer Rim, the Wild Atlantic Way, take a boat to the gorgeous Skellig Islands for a day trip. Hike the steep steps to the ancient monastery. Close your eyes, reach out, and feel the force.

Fun fact: The island is a wildlife preserve and home to hundreds of puffins, and rather than try to edit them out of the film, they served as inspiration for Ahch-To’s own indigenous species—Porgs!

Episode IX – The Rise of Skywalker (and Rogue One) 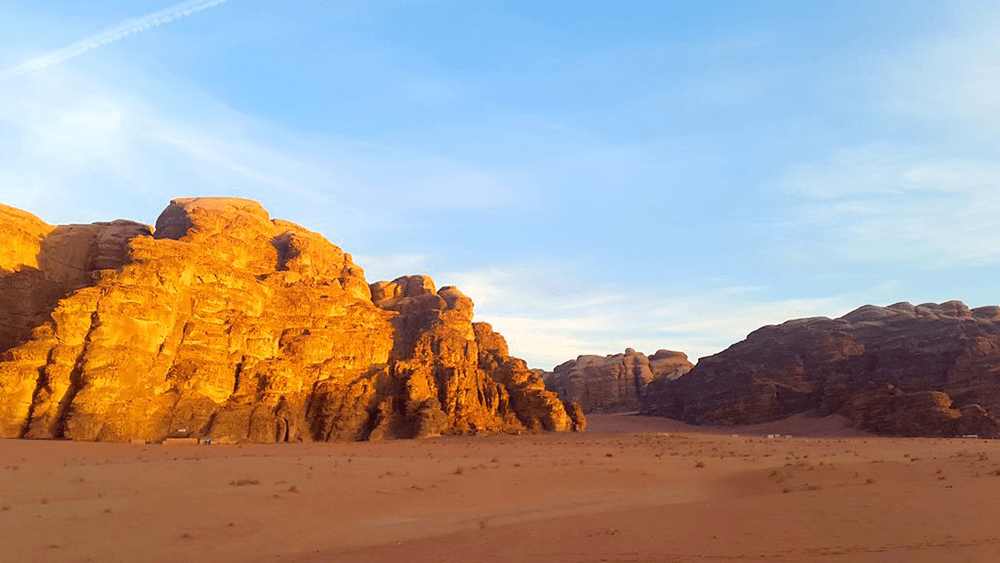 From Jakku to Tatootine, the Star Wars universe loves its desert planets, and the ninth film, The Rise of Skywalker is no exception. The very first opening shot of the teaser trailer shows our heroine Rey standing in the middle of a desert terrain—shot in beautiful Wadi Rum, Jordan. To add another layer onto the mysterious locale, Wadi Rum also served as the filming location for the desert moon Jedha, a holy Jedi site, featured in Rogue One: A Star Wars Story. Hmm. Let the speculation begin!

Wadi Rum is a popular desert location that has been used as a background setting in a number of films, such at The Martian, due to its Mars-like qualities. You can discover the mystical area yourself and set off across the desert terrain toward the vast wilderness stretching before you in a private guided tour.

Fuerteventura is already a popular vacation spot in Spain, so why not take a detour to Savareen—a planet at one spur of the Kessel Run—featured in Solo: A Star Wars Story, a prequel tale of Han Solo. Savareen is home to an abandoned refinery used by criminals who have smuggled valuable minerals from Kessel. Marked by desert landmasses amid huge oceans, the remote Outer Rim territory was portrayed in the film by the sand dunes at Cañada La Barca.

If sand isn’t your style—alright, Anakin—then head to Seville instead to tour the Plaza de España, which was used to create the Naboo city of Theed.

Star Wars isn’t the only major ending—well, for the Skywalker saga at least—happening this year; the other big buzz is the final season of Game of Thrones. One of the filming locations that these franchises have in common is Dubrovnik, Croatia. In The Last Jedi, the walled seaside city was used as the casino coastal city of Canto Bight on the planet Cantonica, where Finn and Rose embark on a mission to find a master codebreaker to disable the First Order’s new weapon. And in Game of Thrones, the walls of Dubrovnik were used to depict the royal capital of Westeros, King’s Landing.

Get a taste of both fictional worlds in the Croatian city with a panorama drive and guided walking tour through the Old town.

If you’re not able to make it out of to some of the more exotic destinations, this year people will have the opportunity to visit the actual planet of Batuu at Galaxy’s Edge in both Disneyland on May 31 and Disney World on August 29. Get your galactic passports ready!

What Star Wars destination would be your ideal vacation?