[/video-title][video-blue-header]Travelers planning a trip to the Middle East are sometimes discouraged by the occasional political and religious tensions which arise in the region. However, don’t be swayed by everything you see on the nightly news. Those who book a trip to the Hashemite Kingdom of Jordan will discover an oasis of calm and some of the warmest hospitality on the planet.

The three-hour flight from Dubai to Jordan is just the start of a 200,000-year journey through the history of humankind. While most visitors fly into Jordon’s capital, Amman, and then hightail it to experience the wonders of the Dead Sea, Petra and Wadi Rum, Jordan offers so much more. Which is why our cameraman begged to return for a second shoot, as one week simply wasn’t enough to capture the many highlights of Jordan. We hope our Jordan video inspires you to visit this incredible kingdom for yourself and helps you plan a Jordan itinerary where you’ll be met with epic landscapes, ancient ruins, incredible cuisine and smiles that you’ll never forget.
[/video-blue-header]
[full-width-paragraph]

Ideas of places to visit in Jordan

Here are our top tips for making your adventure into Jordan truly epic! The main points of interest in our Jordan video are listed below in chronological order, making planning a journey to Jordan a breeze. From the Greco-Roman ruins of Jerash to the incredible mosaics of Madaba, from the castles of the Eastern Desert to the lofty heights of Mount Nebo, we leave no ancient rock in this sun-baked land unturned. 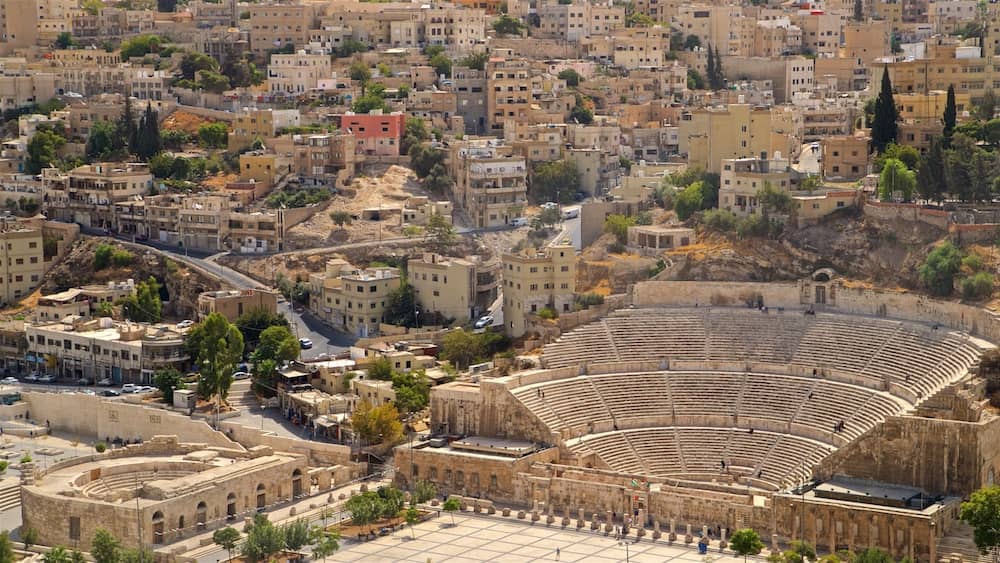 (1:30 in the video) Here we feature Jordan’s hilly, cosmopolitan capital. When planning your trip to Amman, be sure to set aside at least two days to explore The Citadel, the Roman Theater, and the city’s many museums and galleries. When the cooling evening breeze rolls in, follow the Ammani to the souks, cafés and restaurants along Rainbow Street and dine on shawarma and other local favorites. 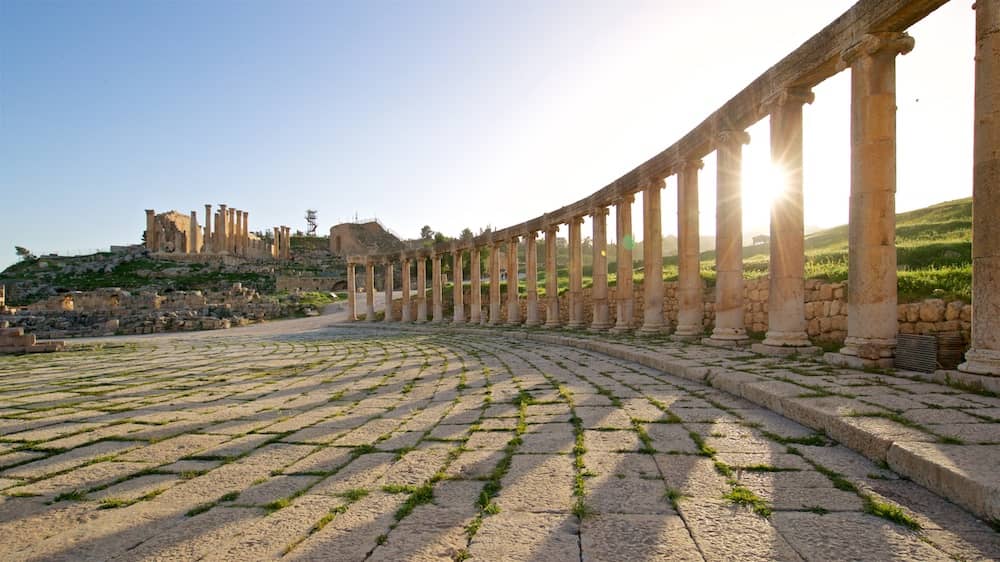 (4:14 in the video) Take the one-hour drive north from Amman to Jerash. Pass beneath Hadrian’s Arch into the Greco-Roman city and explore one of the largest concentrations of Roman ruins outside of Italy. For the best views of this imperial city, climb the steps to the Temple of Zeus and the Temple of Artemis. 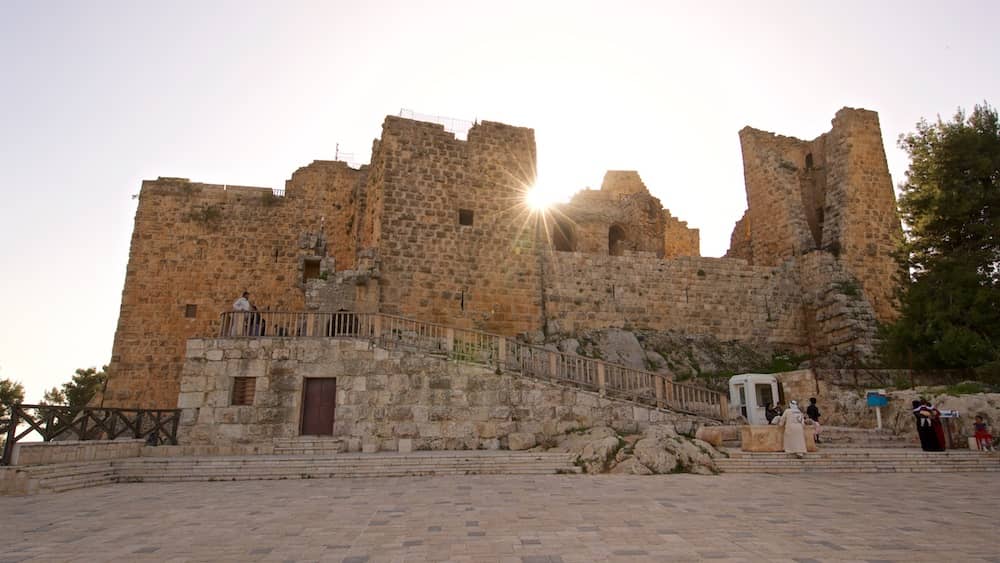 (7:00 in the video) Travel north again and walk the ramparts of Ajloun Castle, one of the many Arab castles built to halt the Crusader armies as they rode down Jordan’s Northern Valley, hell-bent on capturing Jerusalem. 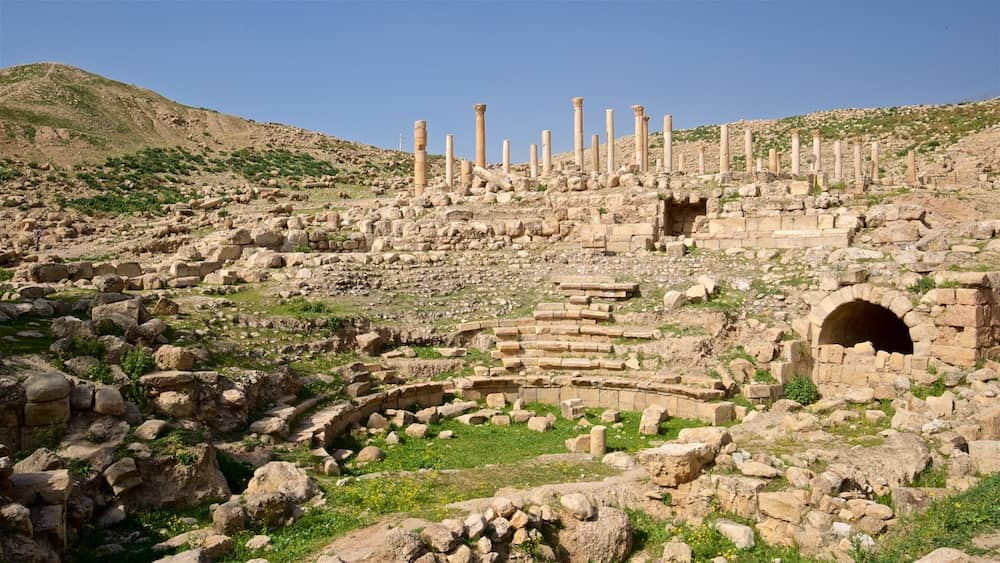 (7:36 in the video) Want to discover some of Jordan’s best-kept secrets? Head further into the rolling, fertile hills of Jordan’s north and explore ancient Greek cities such as Pella where visitors are vastly outnumbered by grazing sheep. 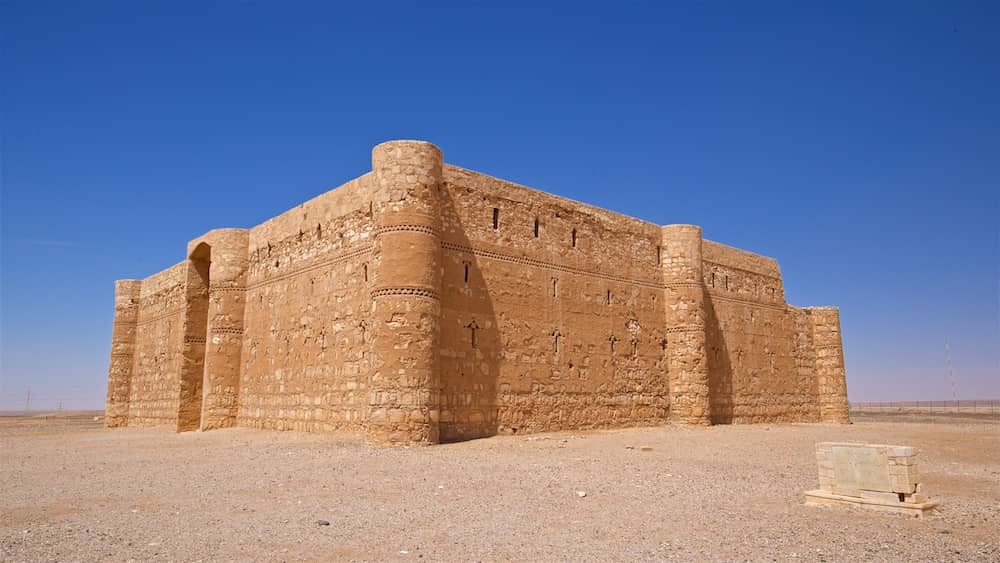 (7:56 in the video) Take a tour into the Eastern Desert and follow the Desert Castle Loop. Here on the endless gravel plains rise lonely citadels and castles such as Qasr Kharana and Qusayr Amra. For many, the highlight of Jordan’s Eastern Desert is Qasr al-Azraq, once the winter headquarters of T.E. Lawrence. 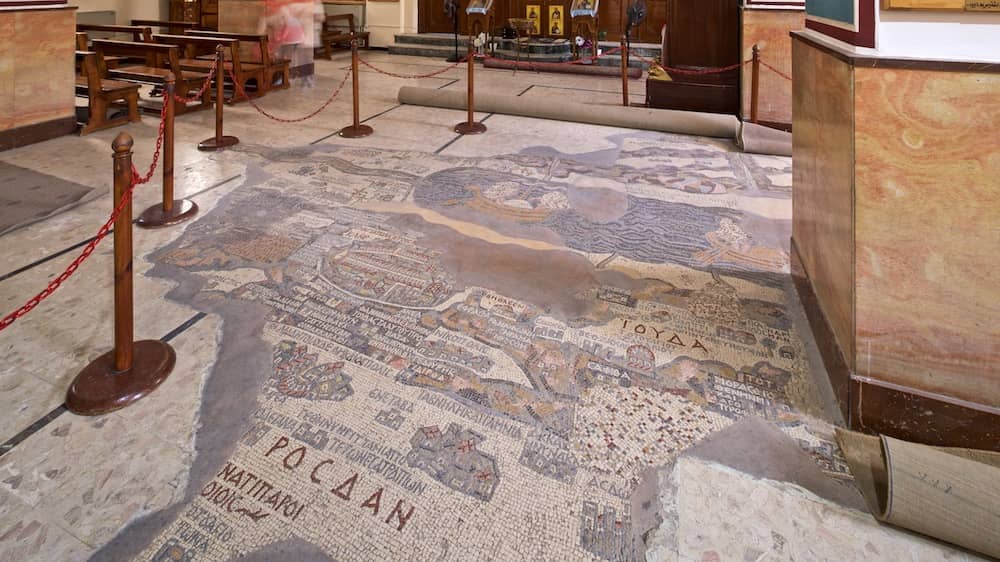 (9:25 in the video) Arrive at the ancient market town of Madaba, famed for its Byzantine mosaics. Most famous of all is the Madaba Map, one of the first depictions of the Holy Lands and a hallowed destination for pilgrims throughout the ages. Madaba’s mosaic traditions still thrive today in workshops and galleries all over the city, so be sure to pick up a special keepsake from your time here. 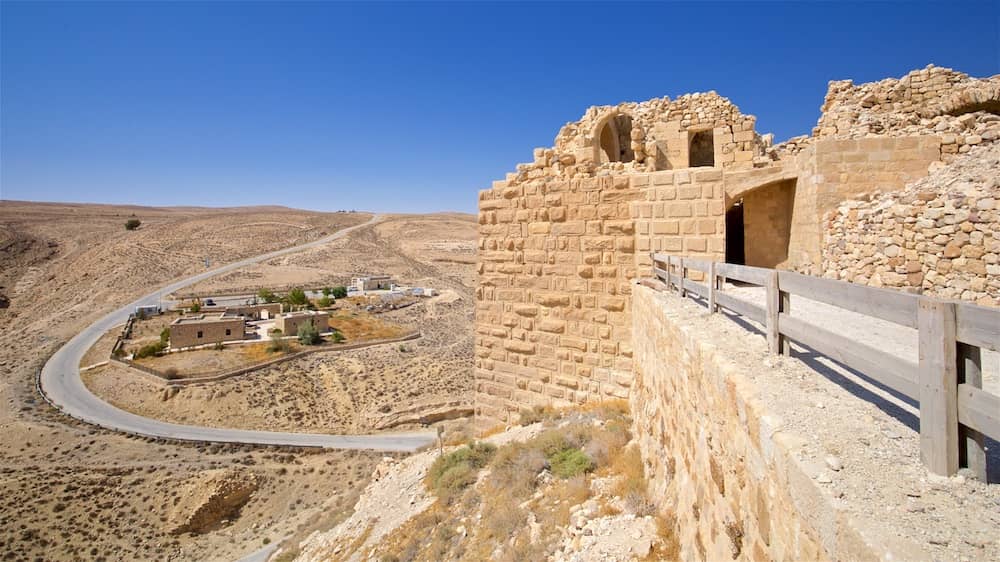 (10:10 in the video) Journey south down the King’s Highway, an ancient trading and pilgrimage route dotted with Crusader fortresses such as Kerak and Shobak Castle. 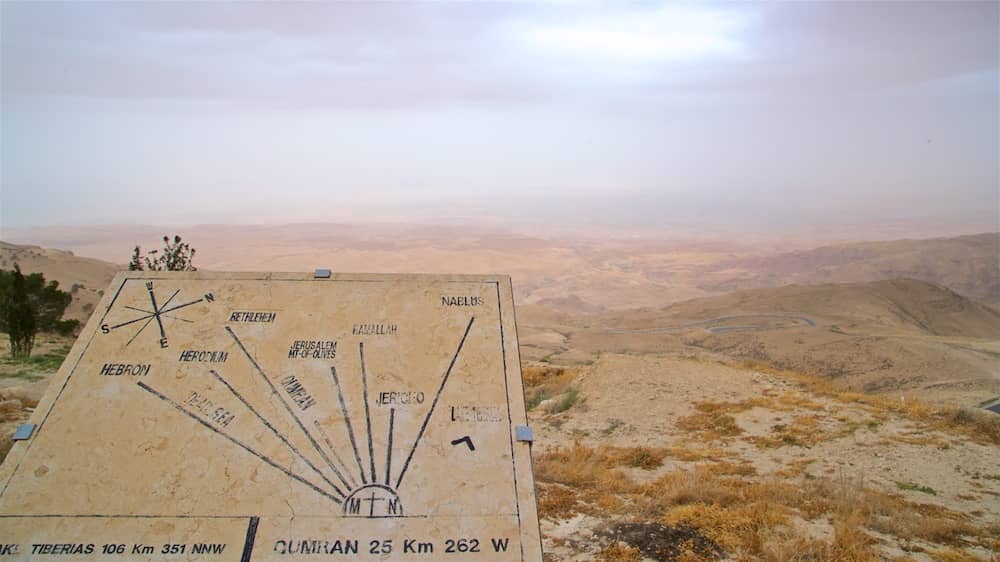 (10:28 in the video) Stand upon the summit of Mount Nebo, where Moses gazed out across the Dead Sea to the Promised Land. After spending a little time admiring the mosaics at the Moses Memorial Church, follow the hairpin roads down to the lowest point on earth. 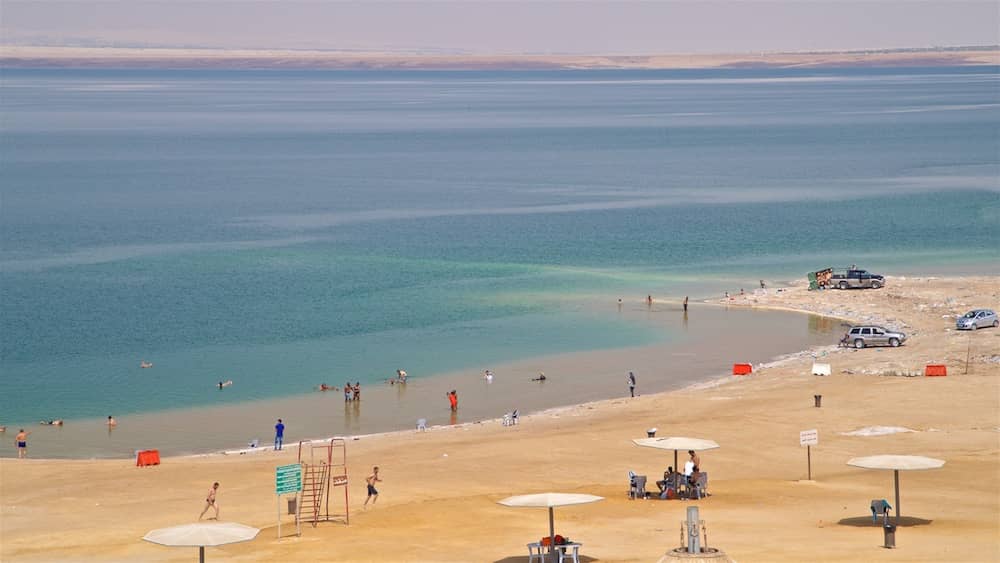 (10:55 in the video) Float with us on the saline waters of the Dead Sea and slather yourself in the same mineral-rich muds whose healing properties once lured King Herod, the Queen of Sheba and Cleopatra to these shores.  Spend a night or two at one of the many Dead Sea resorts, then follow the shoreline south to Wadi Mujib, the Grand Canyon of Jordan. At the Dead Sea’s southern end visit Lot’s Cave, where Lot and his daughters sought refuge when the cities of Sodom and Gomorrah were engulfed in fire and brimstone. 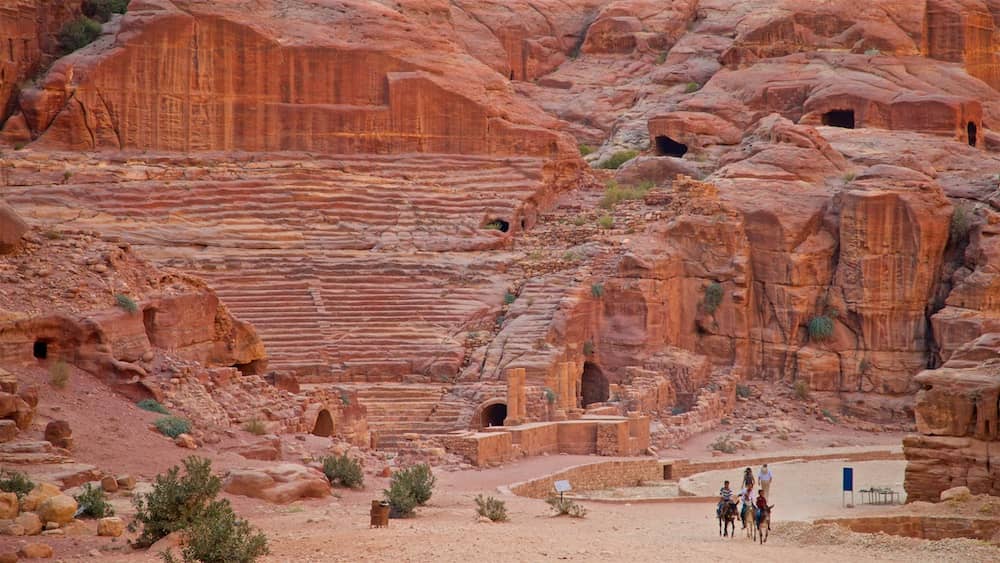 (12:16 in the video) Journey with us through the Siq, a narrow rift through earth and time. Emerge into Wadi Musa, home to one of the world’s ancient wonders, the Nabataean city of Petra, an incredible city carved into towering pink sandstone cliffs. While most visitors only experience highlights such as The Treasury, The Street of Facades and the vast Nabataean Theater, those who stay longer will be rewarded by a 100-square-mile labyrinth of temples, tombs and caves, as well as the new moods and colors that each hour brings with the shifting of the sun. 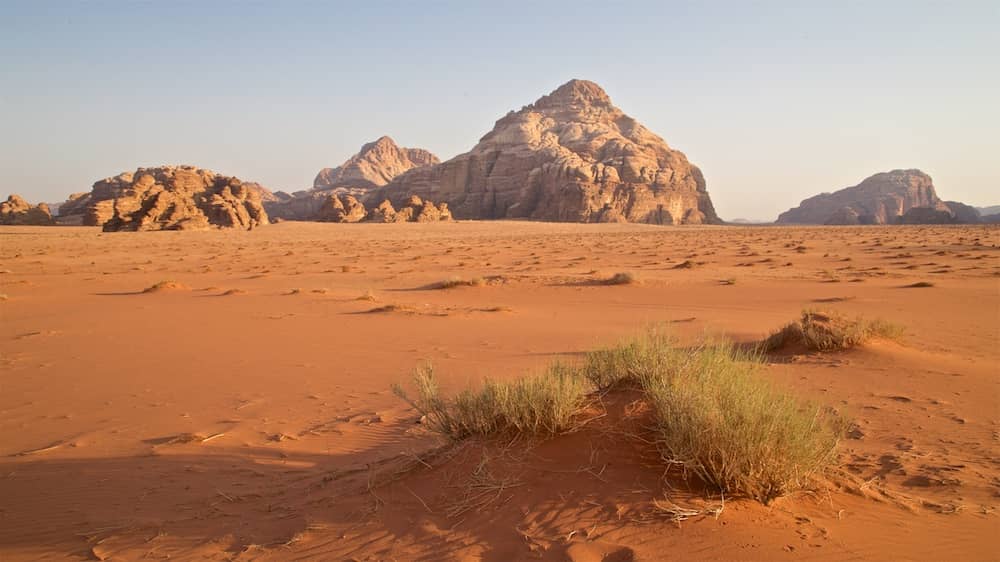 (14:20 in the video) Take a desert off-road safari and treat yourself to a night in a luxury Bedouin camp amid the endless red sands and towering spires of Wadi Rum. Join us at dawn as we take a hot air balloon tour and rise to a place and state of mind so sublime it defies words.

Jordan has been one of the most exciting video projects we’ve ever produced; however, we also captured hundreds of breathtaking images during our time there too! If you need any more inspiration to visit Jordan, browse here to see images that are bound to have you reaching for your passport and checking out the best flight and accommodation deals for Jordan.

We have hundreds of travel videos from incredible destinations around the world. Let them inspire you, because a voyage begins before you ever leave home.