Yosemite National Park, in California, holds a special place in my heart. It was the first national park I ever visited in California, the scene of the hardest hike of my life (that’d be Half Dome). It was the first national park my two oldest daughters ever visited, and the first park in the western U.S. my New York-born parents checked out as after they moved to the left coast to be closer to their grandkids.

Heck, the park was even the subject of a few travel books I’ve written for Compass American Guides.

With this in mind, it’s no wonder I was stoked to have the chance to return to Yosemite with my family to celebrate the National Parks’ centennial.

The drama, of course, was in deciding which members of my family were going to come along for the ride. At first, we wanted to make the trip a full-on multigenerational extravaganza and hit the Yosemite Valley with our immediate family and my parents. Then life got in the way. My wife and I welcomed our third daughter into the world late last year, and the baby was way too young this spring to schlep her to the center of the state. My mother’s work schedule also complicated things; she works in the tasting room at a Napa Valley winery, and feared she couldn’t get off work.

So we improvised. Instead of asking my wife and the baby and my mom, I asked my father to accompany my two oldest daughters (ages 6 and 4 at the time) with me. He jumped at the chance. We swore it’d be the multigenerational road trip of a lifetime. And, in many ways, it was.

Because I’m so familiar with where to stay in and around Yosemite, the biggest question we had to answer was simple: Did we want to be in the middle of everything in Yosemite Valley, or did we want something more remote?

I tossed this question to the girls first. The first time we had visited Yosemite, we stayed in the heart of the Valley, at the lodge formerly known as the Ahwahnee (the name has changed since, but I refuse to acknowledge the new names as they are the result of a ridiculous legal threat). They liked that experience, but also complained about how many people and cars there were. I told them we could stay in the Valley again or look for another option. Both said they wanted to try someplace new.

After tabulating these votes, I posed the same question to my father. He and my mom had stayed in the Valley on their only visit to the park, and he agreed with the girls that he wanted something different.

Once we all agreed we wanted to stay outside of the Valley, we needed to figure out how far we wanted to be, and where we wanted to go. This is where the Expedia app came in super handy. The four of us huddled around my smartphone and plugged in “Yosemite National Park” to the search bar. Then we filtered the results for properties within 50 miles of Yosemite Valley and eliminated those on the valley floor. We also told the app we wanted something with two bedrooms—something big enough for the girls to have their own space and provide dad and me with room to spread out after the kids went to bed.

The no. 1 search result: Evergreen Lodge outside of Groveland, near the Hetch Hetchy entrance.

I appreciated this suggestion for two reasons. First, Hetch Hetchy always has been one of my favorite parts of the park—a part I often wish I had spent more time exploring. Second, a photographer friend of mine had recommended Evergreen to me about a week prior. It was serendipity. So we booked. Right there with the app.

Ultimately, we splurged and spent an extra US$90 per night for a two-bedroom cabin. Even with this upgrade, the cost of the hotel was reasonable when compared to the nightly rates of properties in the Valley.

Stage 2: On the Ground

We were slated to leave for our trip on a Thursday morning—by the Monday prior, I was scouring the Internet for activities to sign up and do. My general philosophy when traveling with the kids is never to book too much, since I’ve learned that the girls like to improvise and make their own fun. With this in mind, I limited our planning to one activity each day.

Since Thursday was a travel day (from San Francisco), I targeted Friday for the first adventure. A quick search of the park’s website led me to a page about all-ages art classes at the Yosemite Art Center. My kids are artistic beyond their years, and they love watercolors in particular. Poetically, the class that was being offered the week we were there was a class in outdoor landscape painting with watercolors. It was almost as if they were offering it just for us. At US$10 per person, we jumped at the chance to sign up.

For the Saturday, I stuck to the kind of national park planning I know best—hiking. We made a plan to drive into the park at the Hetch Hetchy entrance, park at the main trailhead, hike through the tunnel at the far side of the O’Shaughnessy Dam, and tromp around the perimeter of the Hetch Hetchy Reservoir to two waterfalls on the other side. I showed the girls pictures of the waterfalls and they got excited. When I told them I’d make my special GORP and they could eat it while we hiked, they got even more excited. (The little things really keep them interested.) All this plan would cost us was US$30 for a seven-day entrance pass to the park.

Beyond these two main plans, we built in ample time for exploring around the lodge and making friends with other lodge guests. The girls appreciated the free time. My father, who doesn’t unwind nearly enough, did too.

Did somebody say explore? Once we checked in to Evergreen, that’s pretty much all we did. We spent the first afternoon poking around the property itself—the place has four or five play areas for kids, and my daughters insisted on spending time at each of them. The lodge also has a commons area with cornhole, giant Jenga, and other family-friendly games. We spent a while here, too—at least long enough for my oldest daughter to beat everybody in shufflepuck before dinner.

The day we drove to the Valley for our art class, we were sure to explore then, too. After the class, we hiked up the paved trail to Yosemite Falls and marveled at the tallest waterfall in North America. Later that afternoon, we followed the Merced River down-valley to a spot where we were able to take off our shoes and socks and wade. Both girls said it was the coldest water they’d ever felt.

On Saturday, our day at Hetch Hetchy, the entire itinerary was based on exploring. Here, however, my father and I had to be flexible. We had hiked through the tunnel and stopped for lunch on the other side when my middle daughter started complaining of an upset belly. When it became clear her complaints (or the associated pain, I guess) were not going to subside, we abandoned the plan and tromped back to the car. Instead of enjoying those beautiful waterfalls, we spent the afternoon collecting fuzzy caterpillars back at the lodge. The plan was unexpected, but it worked, because everyone had a blast.

Finally, on our last day in Yosemite, before we headed home, we lingered on the road from Evergreen to the main highway, parking and getting out to look at creeks every few miles or so. By this point in the trip, the girls were obsessed with their caterpillars, and would stop at nothing to expand their collections.

As we motored west back toward the Bay Area, I couldn’t help but smile at our weekend of fun. Yosemite on its own is epic. Yosemite with three generations of the same family is even better, if for no other reason than the bonding that takes place.

My girls made fun of the way grandpa orders food and laughed when Grandpa talked in his sleep—two of the quirks about which I’ve been razzing my dad for years. But the girls also thoroughly enjoyed caterpillar-hunting with grandpa, and bedtime stories with him. I enjoyed seeing my kids engage with my father in this way, too. This is the kind of stuff we miss during big family gatherings. It’s the kind of stuff that only comes from traveling together.

Which is why we’ll definitely do it again next year. Heck, we might even make this whole multigenerational-trip-to-Yosemite an annual thing. Stay tuned. 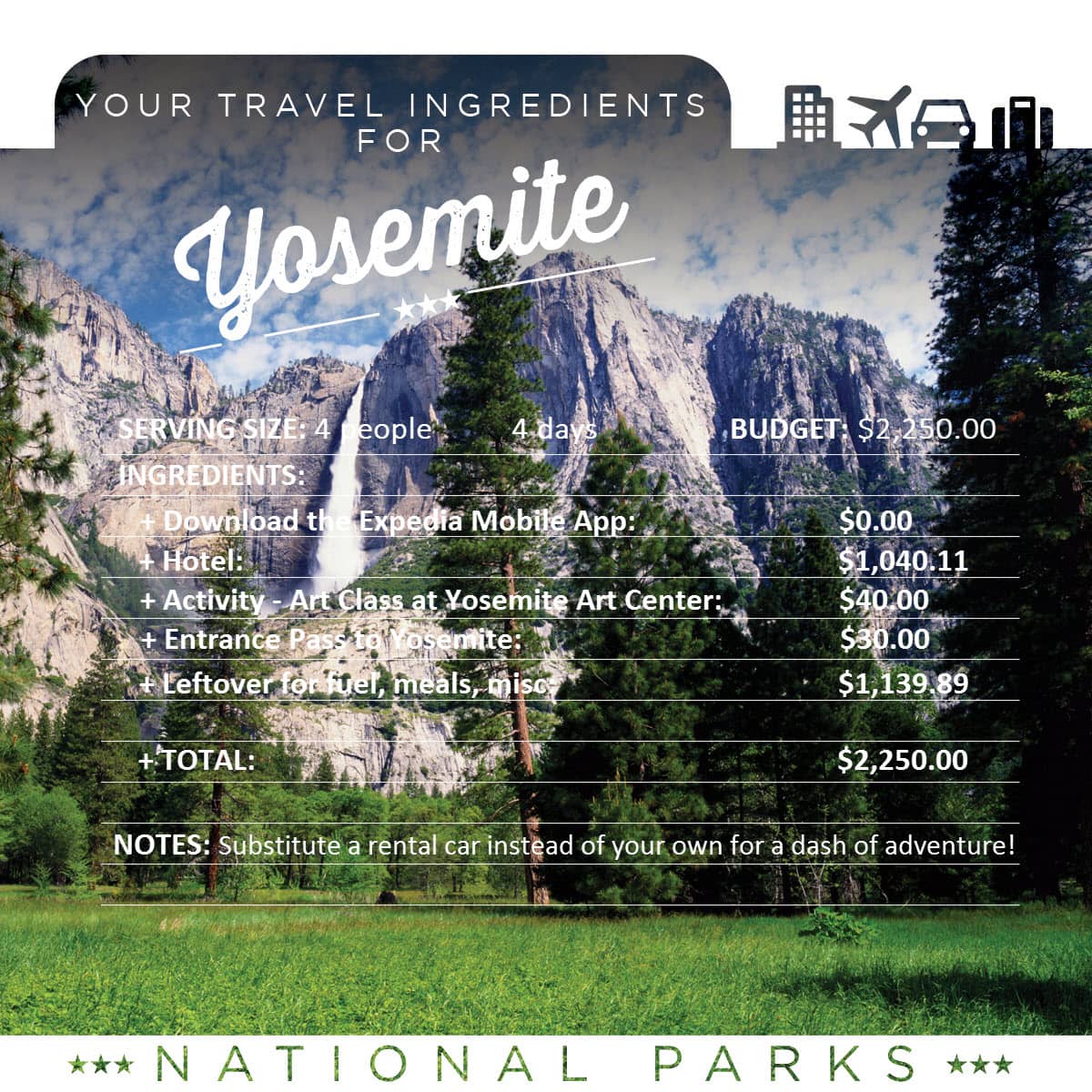 Start with the Expedia app. Select best hotel rate and blend until smooth. Add dash of activities for some flavor and ease. To really spice it up, rent a car so as not to put miles on your regular trusty steed.

Next, mix up your dining options with recommendations from friends and family. This will make your road trip recipe eclectic and fun. It also will force you to expand the family travel comfort zone.

Toss in a dash of adventure and exploration to taste. Serve piping hot.

What are your favorite multigenerational family travel destinations and why?