When people talk about New York City, they never use small words. Chances are, you’ve heard people gush about the Big Apple in superlatives: The best pizza, the tastiest dumplings, the tallest Christmas tree, the most incredible rooftop view, and so on.

If you’ve never been to New York, you might feel intimidated by a place whose reputation is so huge. And you might be pleasantly surprised to find out how manageable this world-famous city actually is. Feeling lost as you plan your first visit to the city that never sleeps? Don’t panic! Here are the best travel tips to New York City.

When is the best time to visit New York City? 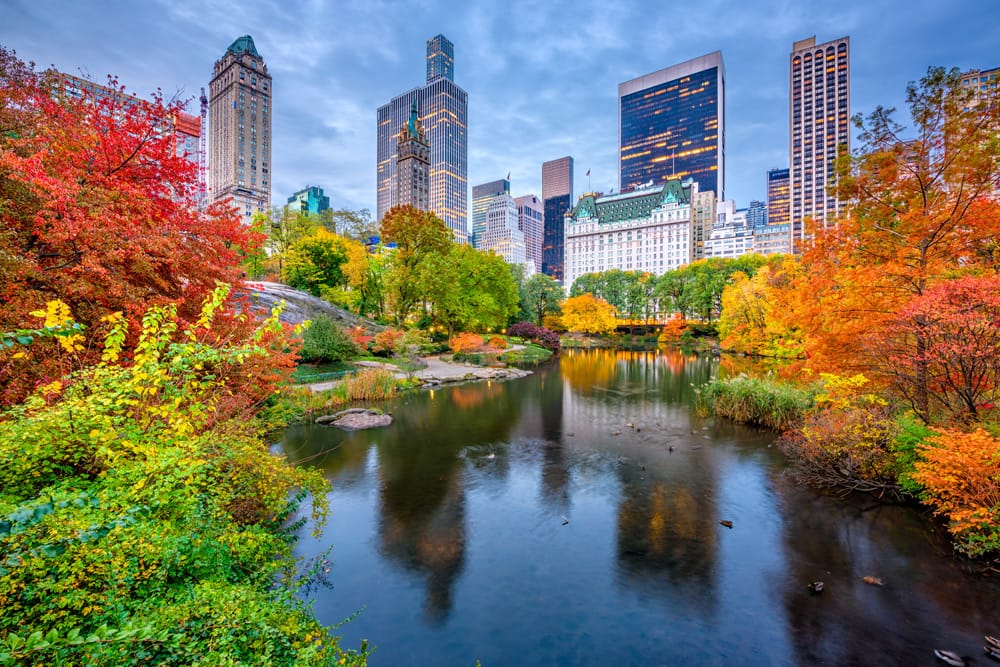 New York’s magic doesn’t wax and wane throughout the year—it just changes. In spring, trees are budding and flowers are blooming in Central Park. Summertime is perfect for warm nights walking the streets of Little Italy. Autumn brings blue sky and brisk air, perfect for wearing a peacoat and meandering Greenwich Village. And nothing is more festive than Macy’s window displays in December. When it comes to travel tips to New York City, there’s rarely a bad time to visit.

However, if you’re looking for an ideal time to see the city with fresh eyes, the best time to visit New York is autumn or late spring. During both these seasons, you’ll be safe from extreme temperatures—both the summer mugginess and the sharp winter winds whipping off the Hudson River. Aim for mid-April through mid-June, or mid-September through mid-November, to find the most pedestrian-friendly weather to walk around in.

New York is a global city, and there are three primary airports welcoming flights to New York City. John F. Kennedy International Airport, or JFK, is in the borough of Queens, as is LaGuardia Airport. Newark Liberty International Airport is just over the border in New Jersey, but it serves as one of the main airports for the New York metropolitan area. Great news for budget-conscious travelers: All three airports are accessible from Manhattan by light rail or bus.

How many days do you need in New York?

New York City is expand-to-fit. You can get a good deal of sightseeing done in as few as three days, but to give yourself enough time to really soak up the city, you should aim for a five-day trip. There’s always something new to see, taste, or experience in New York.

What is the best way to travel in New York?

When it comes to travel tips to New York City, the golden rule of transportation is: Don’t drive unless you must! While rental cars might be convenient in a city such as Los Angeles, the majority of New Yorkers get by just fine without a vehicle. With walking, hailing a cab, and taking public transportation such easy options, there’s no need to fight against gridlocked traffic or search in vain for parking.

Porters, doormen, hotel housekeepers, and bartenders all work hard to keep the Big Apple running like clockwork. And they’ll all appreciate being shown some gratitude through gratuity.

Where should you stay in New York the first time?

Of all the New York travel tips you’ll get, where to stay might end up being the most handy. Of course, there are many excellent hotels in New York City to choose from, but some neighborhoods have especially vibrant character, making them perfect for visitors seeking local color:

What is there to do in NYC at night?

It’s called “the city that never sleeps” for a reason: There are things to do in New York at every hour of the day or night. If you’re a night owl, try one of these fun activities:

What are the best places to visit in New York?

New York sightseeing is an unforgettable adventure. Though it may be hard to know where to start in a city so impressive, the real challenge is knowing where to end. You could spend a year in New York and never get bored… but if you only have a handful of days, you can still check a lot of things off your bucket list.

New York City is a place you’ve likely dreamed about your whole life. And once you visit, you’ll have amazing memories to treasure forever afterward. In fact, you’ll probably be eager to plan your next trip to NYC as soon as you get home. Only next time, you won’t be a newcomer anymore—you’ll be an experienced pro, ready to navigate Manhattan like a local!