The Galápagos Islands off the western coast of Ecuador are affectionately known as “The Enchanted Islands.” Now, after a week spent exploring them, I understand why. Each island is pristine, untouched by human interference with the exception of scientists and small groups of tourists who are carefully moved through specified routes. The islands are guarded by local naturalists who have made it their life’s mission to protect the endemic species who have roamed this volcanic archipelago for hundreds of years. The result is a utopia. Sea lions regularly go on parade along red sand beaches of Rábida Island. In Fernandina Island,  the iguanas are the kings of the lava rocks.  But in the highlands of Santa Cruz Island, it’s the giant tortoises that have full reign.

In fact, it is a federal crime that will land you in jail if you happen to run over one of these magnificent gentle giants who frequently (and slowly) cross the main road.

With a place like the Galápagos Islands, I think pictures are a much stronger way to tell the story, so here are six exquisite scenes from the enchanted islands. I hope they inspire you to book this bucket list trip soon. 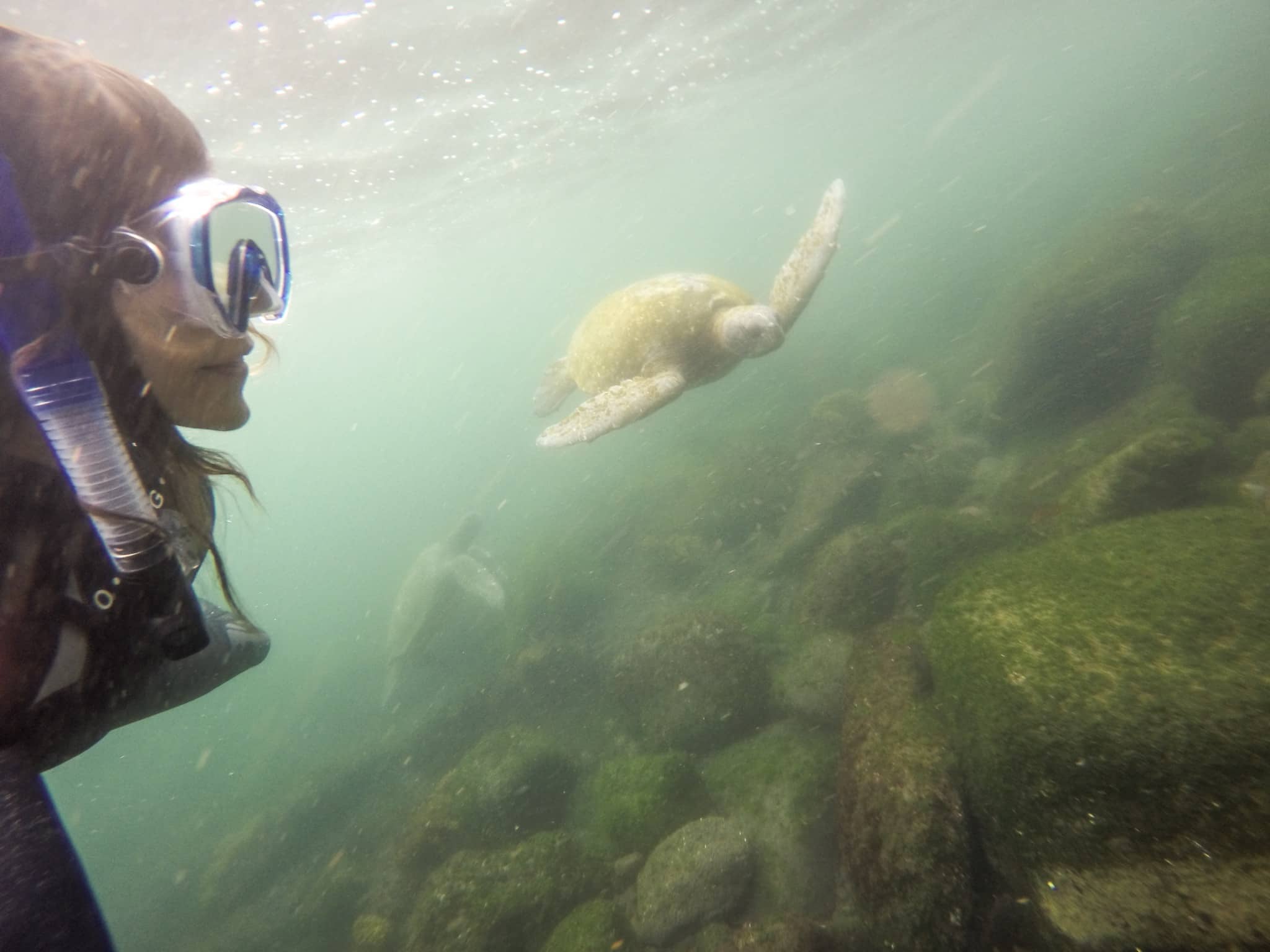 Snorkeling in the Galápagos Islands is unlike anywhere else in the world. With no fear of humans, expect sea turtles and sea lions to swim come right up to you. One sea lion nearly kissed my mask. When thinking about what to wear in the Galápagos Islands, a wetsuit is a must especially if you plan to snorkel or dive in the western islands. The perk of being a little cold in the water is that you are treated to extra special sea life like penguins! 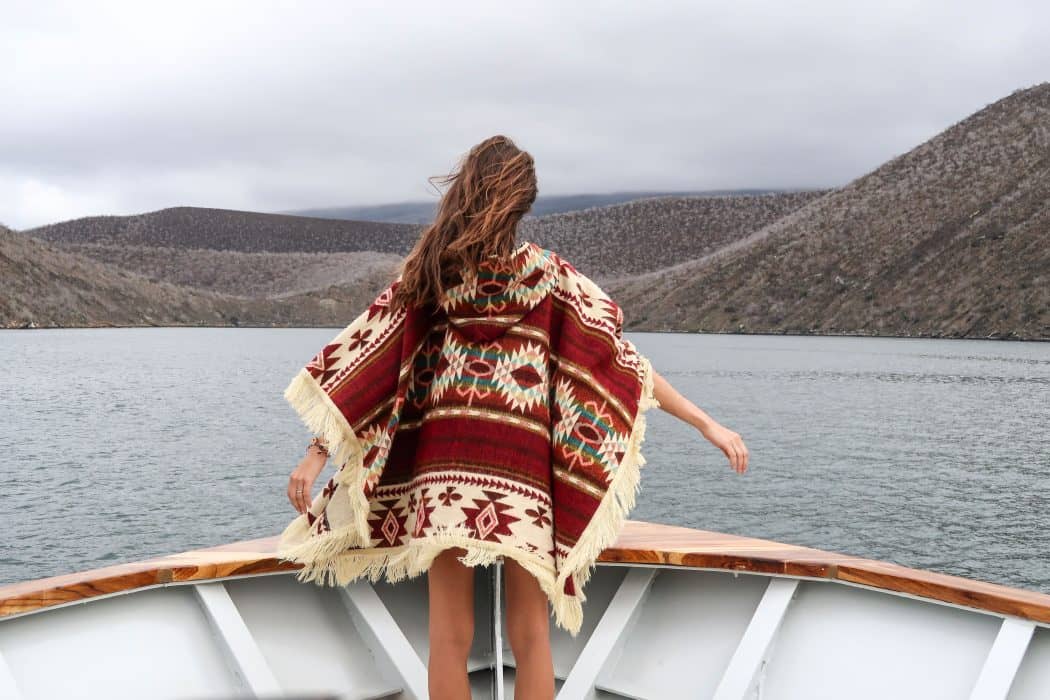 As you cruise through the open waters between islands, you’ll be treated to stunning panoramas and palo santo forests as far as the eyes can see. Keep your eyes peeled for whale sightings, sharks and curious sea lions who regularly approached our ship! 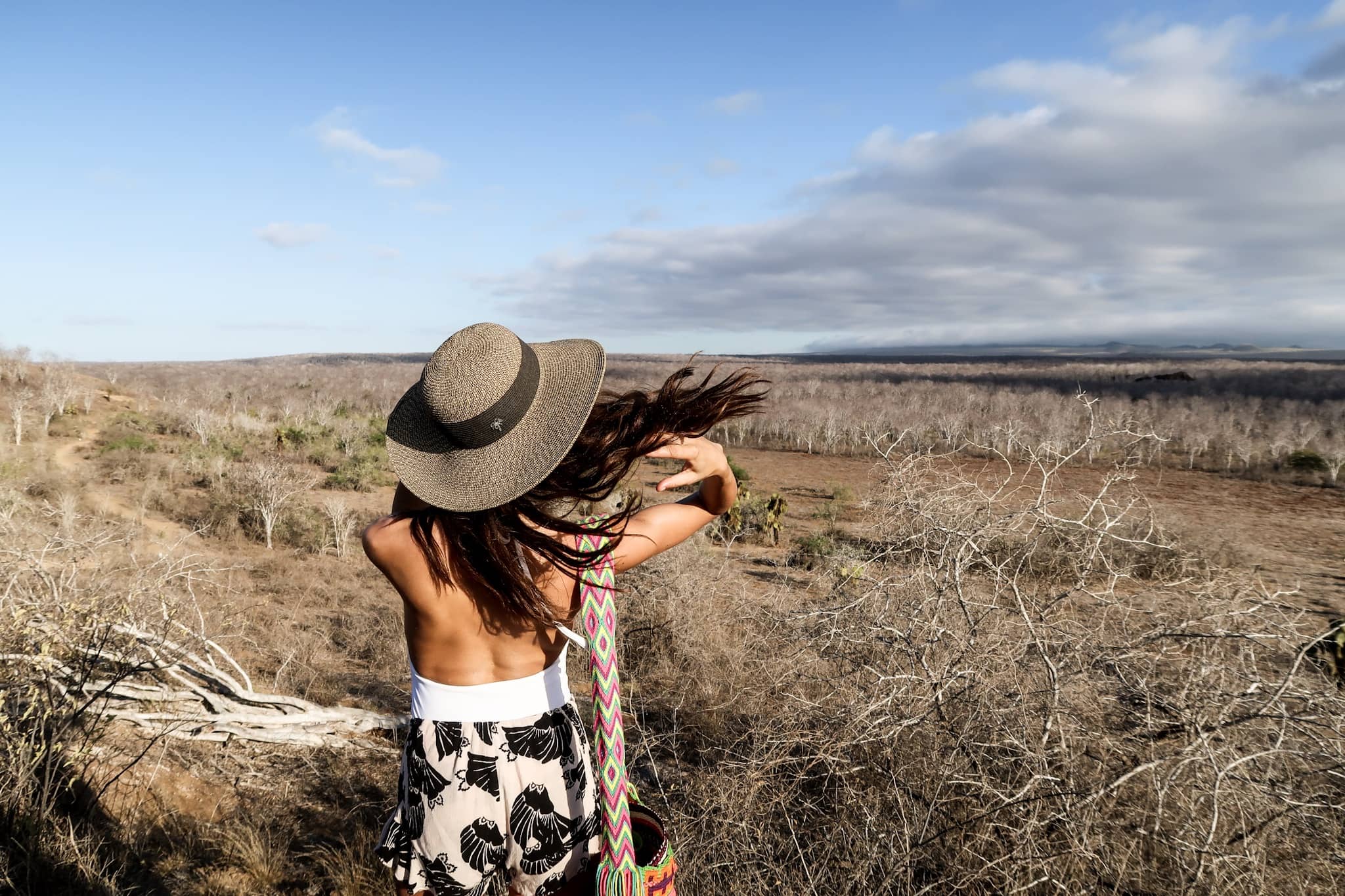 There are two distinct seasons in Galápagos: garúa (wet season) from June to November, and the hot/dry season from December to May. Average temperatures range from the high 60s to low 70s in the wet season and 80s in the hot season,  although our guides told us it’s been getting way hotter than that. This is a photo from dry season where the bare palo santo trees create a dramatic landscape. 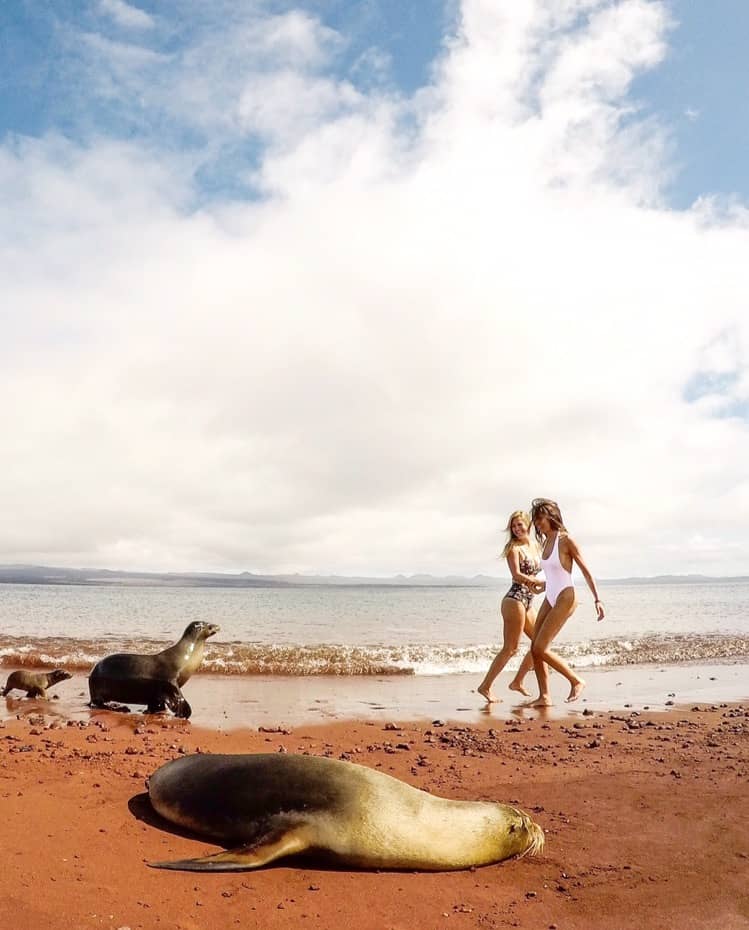 You can expect to see sea lions basking along the red sand beach of Rábida Island, my favorite of the Galápagos Islands. It’s a stunning place; the contrast of the red sand and green prickly pear cactuses wows you. The water here is crystal clear!

Viewfinder Tip: You must stay at least seven feet away from the wildlife in the Galápagos Islands, but if they are curious about you and come closer, that’s okay! 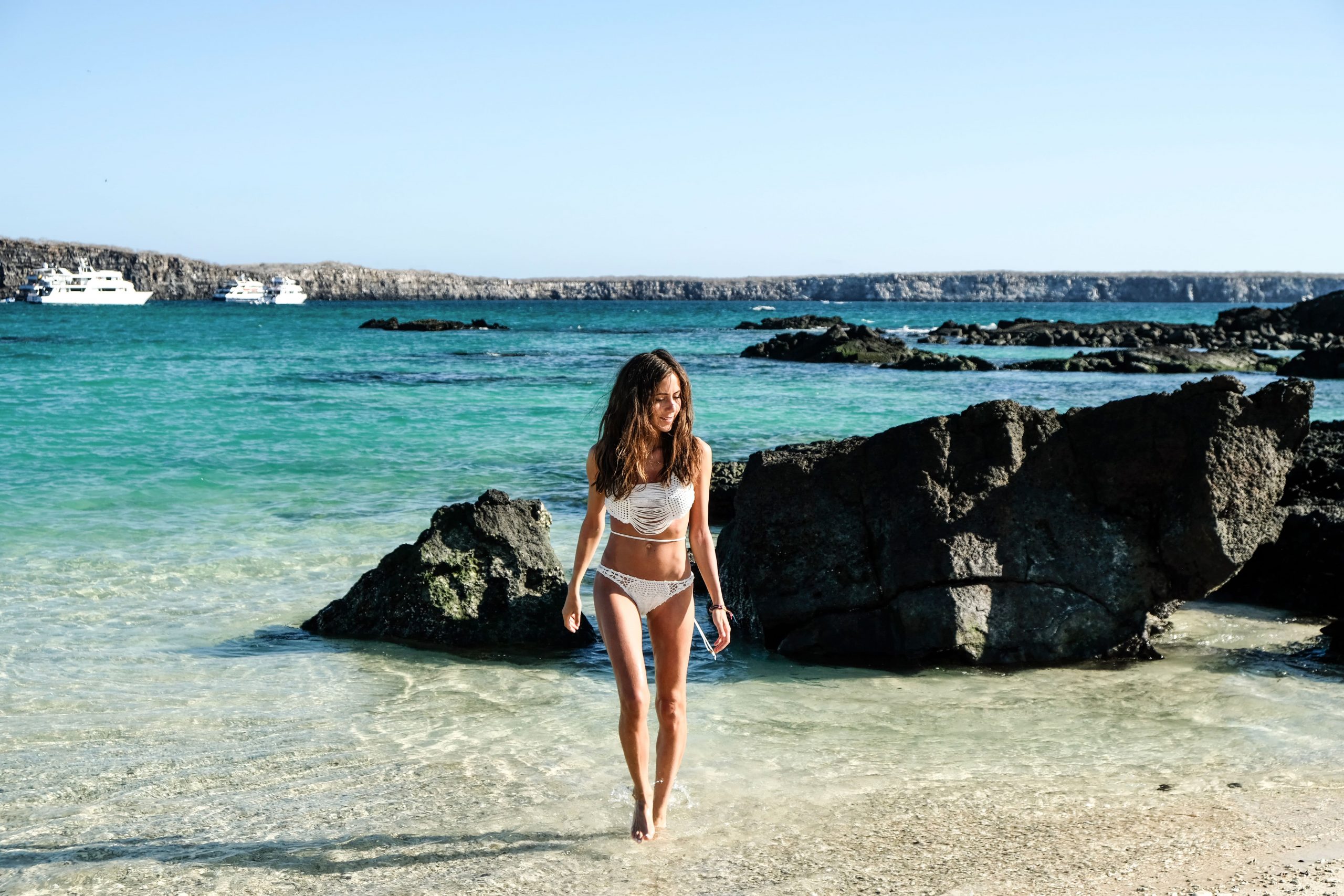 This was the scene of my first day in Galápagos Islands, we awoke after cruising all night to Darwin Bay’s beauty. Turquoise water, black lava rock and tons of blue-footed boobies greeting us. 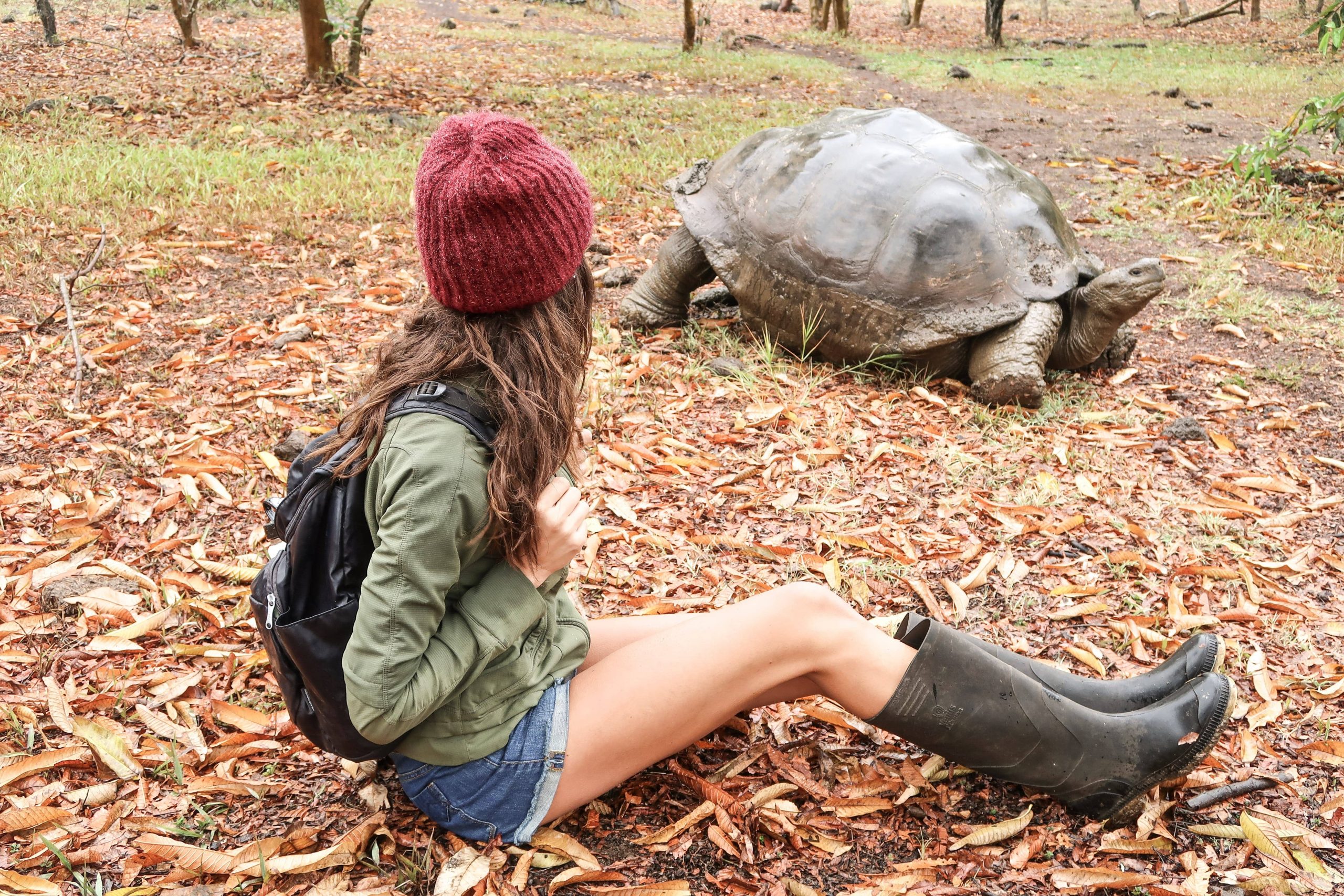 These are the famous giant tortoises of the Galápagos Islands. Some are over 200 years old and can weigh up to 500 pounds. They are most commonly found in the more humid and damp highlands region of Santa Cruz.  We watched them take mud baths, graze on shrubs and retreat into their shells for some privacy!

What animal would you most like to encounter in the Galápagos Islands?