Austrians are world’s most likely to sunbathe nude; “The Slob” and “The Boozer” are two least favorite beachgoers

BELLEVUE, Wash., June 21, 2016 – Today, Expedia.com® released the results of the 2016 Expedia® Flip Flop Report, an annual study of beachgoer behavior across North America, South America, Europe, Asia and Australia/New Zealand. In particular, the study looks at which country’s residents are likeliest to disrobe fully, what beach behaviors are considered least appropriate, where the most attractive beachgoers can be found, and much more.

In particular, the 2016 Flip Flop Report found that respondents from Austria are most inclined to go au natural when visiting the beach—marking the first year that Austria has held the top spot. Report data also revealed that 23 percent of Americans would use beach WiFi to “share what [they] are currently doing on Instagram or Snapchat,” and that beer is the world’s favorite alcoholic beach drink, cited by 28 percent of respondents worldwide.

To help more consumers reach the beach, Expedia is offering exclusive deals, promotions and package savings of nearly 20 percent every day. Expedia gives travelers freedom to book with a variety of different airlines, hotels, and more, often at double the rewards. This summer in particular, U.S. travelers can visit www.expedia.com/20-years-of-expedia to uncover a variety of coupons, including 20 percent off hotels, $20 off hotels, $150 off packages, and a surprise coupon offer where the discount could be as much as 96 percent off. Expedia also will offer hotel deals throughout the entire promotion, which runs through August 2, 2016.

The 2016 Expedia Flip Flop Report was commissioned by Expedia.com and conducted online by Northstar, a global research and consulting firm. The study was conducted with 11,155 adults 18 years of age and older, across 24 countries and on five continents.

“Year in and year out, travelers tell us that there’s no vacation they prefer more than one at the beach,” said John Morrey, vice president and general manager of Expedia.com. “When they leave the beach, they immediately begin dreaming of their next visit. So we use the Flip Flop Report to get more insights on what people prefer to do when they’re there, and the answer is, basically, a whole lot of nothing.”

Austrians are the most likely beachgoers to sunbathe fully nude

The Flip Flop Report dates back to 2012, and in previous iterations, respondents from Germany won or tied for first place. This year, 28 percent of Austrian respondents report having disrobed fully at a public beach, edging Germans (25 percent) and Americans (18 percent). Worldwide, 10 percent of beachgoers claim to have gone nude. The world’s most modest beachgoers can be found in Asia; only 2 percent of Malaysians and South Koreans and 3 percent of Thai and Japanese respondents have sunbathed in the nude.

American respondents largely disapprove of toplessness or nudity at public beaches. A whopping 62 percent describe themselves as “somewhat or very uncomfortable” with that level of exposure—up from 44 percent in 2014. Further, 77 percent of American female respondents report that they would “never” go topless at a public beach.

Americans split on the Speedo

Beach etiquette: a look at the most annoying beach behaviors

The 2016 Flip Flop Report also asked respondents to gauge the most annoying beachgoer behaviors. “The Slob,” the person who doesn’t clean up after himself and leaves garbage on the beach, occupies the top slot worldwide. For Americans, the 10 least popular beach personas are: 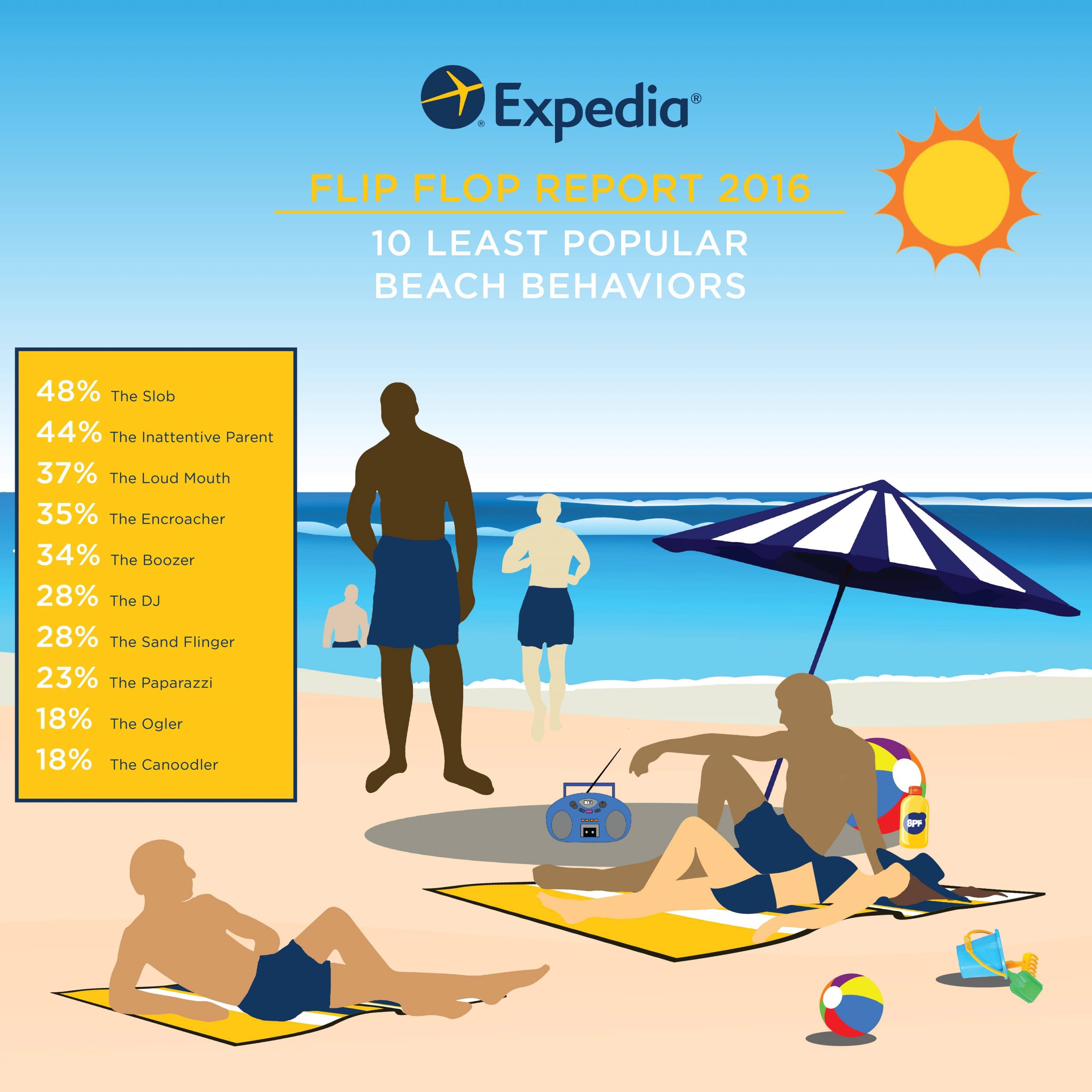 Having possessions stolen is the most prevalent beach fear worldwide, cited by 34 percent of respondents. Respondents from America agree, with 26 percent ranking it as the top worry. Sunburns are American respondents’ second-biggest fear (18 percent), with bad weather (15 percent) and shark encounters (13 percent) taking third and fourth place, respectively. About 53 percent of Hong Kong residents state that they simply avoid swimming entirely rather than risk a shark bite incident. Roughly 22 percent of American respondents do so as well.

Survey respondents certainly continue flocking to the beach. About 46 percent of Americans said they had taken a beach vacation in the past 12 months, and 48 percent of respondents said they intend to do so in the next 12 months. Among those who have taken a beach trip in the past year, 57 percent said they did so to an international destination. Based on responses as to where vacations took their most recent beach vacation, the most popular international beach destination for American sun-worshipers is Mexico. Within America, Florida’s beaches are the favorite. Worldwide, Spain’s beaches were the most visited by study respondents, followed by beaches in Australia, Italy and Mexico.

Relaxation/doing nothing is the world’s favorite beach indulgence (cited by 74 percent). Reading and napping are the next-most preferred activities, at 44 percent. However, about 17 percent of Americans work while sunbathing. Americans are the second-likeliest people worldwide to work when at the beach, trailing only Indian respondents (32 percent).

For more information about the 2016 Flip Flop Report, visit the Expedia Viewfinder blog.

This study was conducted on behalf of Expedia by Northstar, a globally integrated strategic insights consulting firm.  This survey was conducted online from April 6 to April 21, 2016 across North America, Europe, South America and Asia Pacific using the Kantar-owned GMI (Global Market Insite) and Lightspeed Research amalgamated group of panels.  The study was conducted among 11,115 adults aged 18 years of age and older across 24 countries. Sampling quotas and weighting were used to ensure the sample is representative of each country’s population in terms of age and gender. Assuming a probability sample, the margin of error would be +/-0.93 percentage points, 19 times out of 20.

Expedia, Expedia.com, Expedia Rewards, Find Yours, Vacation Deprivation and the Airplane logo are either trademarks or registered trademarks of Expedia, Inc. in the U.S. and/or other countries. Other product and company names mentioned herein may be the property of their respective owners © 2016 Expedia, Inc. All rights reserved. CST # 2029030-50.