Europe’s charm entices us with the allure of cafes on cobblestone streets, fine wines from the countryside, and adventures around romantic castles. But let’s face it, Europe can be expensive.

Before you nix your dreams of a European getaway and start planning a staycation instead, take a peek at the currency exchange rates. The U.S. dollar has recently gained strength in the European market, and we’re experiencing one of the best exchange rates for travel. Right now, one U.S. dollar (USD) is worth .88 euros (€). While this rate doesn’t suggest that Europe is suddenly inexpensive, it is does mean your dollar will go further, making travel across the pond more affordable.

Because now’s an excellent time to jump on these lower travel exchange rates, we’ve pinpointed four European destinations where you’ll get more bang for your buck.

Thanks to the euros to US dollars conversion rate, you can afford another round of Guinness in Ireland’s capital city. Currently, a pint of beer in Dublin is roughly €5, which converts to an affordable $5.58. Meanwhile, a sit-down meal at restaurant will cost around €25 ($28.41). Midrange hotels generally range between €100 and €175, or $113 and $199, which shouldn’t break the bank. With these saving you can splurge on other exciting attractions Dublin has to offer.

If you’re up to date on global news, you’re aware of Greece’s debt crisis. Prices aren’t exactly dirt cheap in Grecian cities such as Athens, but they are lower than those of more financially stable European cities. 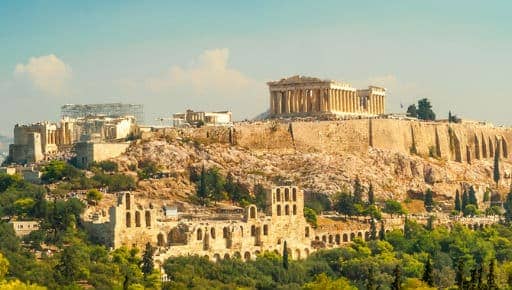 As of post day, Greece’s economy is in austerity negotiations with the E.U. Please check the latest news for current information.

Only around five percent of Turkey is actually located in Europe, but its capital, Istanbul, sits on the western edge of the continent. Turkey accepts euros for certain purchases, but its official currency is the Turkish lira (TRY). With the current rate, 1 USD equals 2.67 TRY.

Viewfinder tip: Exchange booths are notorious for having the worst rates. When exchanging money, consider a bank or ATM instead.

Istanbul is among the cheaper European hot spots. For instance, it would only cost you 30 TRY ($11.05) for tickets to visit Hagia Sophia, the magnificent 6th century mosque. There are a number of activities  you’ll be able to afford. Meanwhile, kebabs, Istanbul’s popular street food, won’t cost any more than 10 TRY ($3.68), and mid-range hotels often fall between 185 TRY and 600 TRY; $68 to $220, give or take.

Crack open your piggy bank and make those pennies go further. Between the Europe exchange rate deals and international travel deals, right now a trip to these European destinations just may be more affordable than you thought.

What are your tips for saving money while vacationing in Europe?