After exploring the sights and scenes of Macao, traveler and photographer James Relf-Dyer (@jamesrelfdyer) is giving us the inside scoop on the top places to visit and where to capture that perfect Instagram photo.

Ever wondered about visiting Macao? After 4 days exploring this fascinating city, it’s truly like no other that I’ve traveled to. Here’s a shortlist of 7 incredible spots that’ll make you want to hop on a plane and see it for yourself!

By far one of the most impressive sights of the city, this view can be enjoyed just down the road from the Hotel Royal on Macao Estr. da Vitoria street. The mighty building that you’re likely wondering if it’s real or photoshop trickery is the Grand Lisboa. An entertainment complex that looks out of this world. In the shadow and framed between the authentic homes of Macao, it’s a spot that shows off the city’s diverse architecture. It also represents the fusion of two worlds; the Chinese / Portuguese heritage and the 21st century. A similar shot caught the attention of National Geographic who named this scene the 2018’s best travel photo which propelled Macao to a global audience of travelers. Wild! 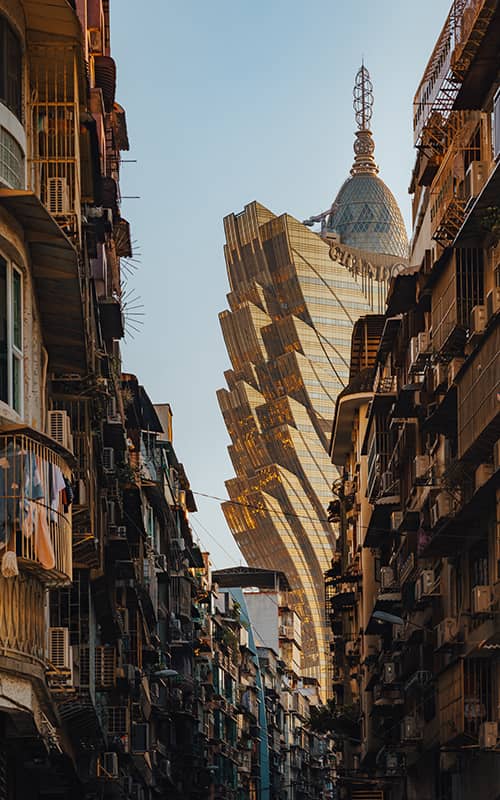 The Ruins of St Paul’s are the most prolific landmark in Macao, in the cultural heart of the historic center. Perched at the summit of a set of stone steps, the remarkable site was acclaimed the ‘Vatican of the East’ for being the largest church in Asia at the time. Now only the ornate facade remains, which survived a fateful typhoon in 1835 where the original structure burnt down in flames. Today, it’s a symbolic altar to the city which is often packed with visitors – particularly during sunset. Be sure to visit in the morning (earlier the better) to capture your perfect photo. 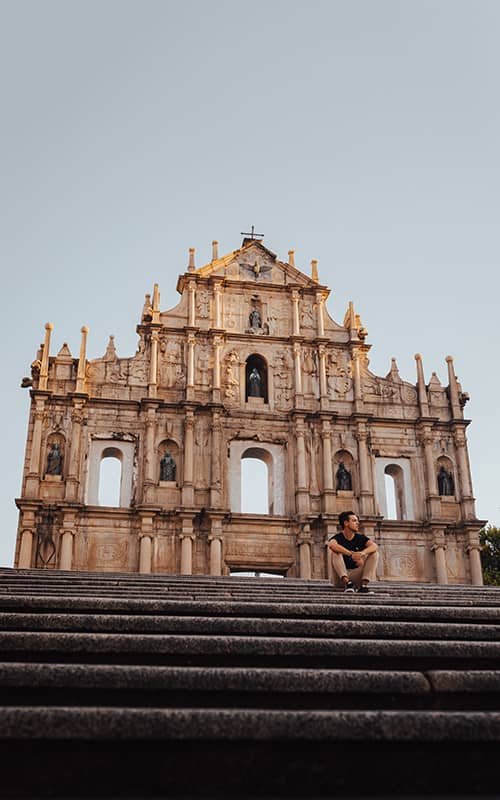 Rua Da Felicidade, also known locally as ‘Happiness Street’ can be found a few minute’s walk from Senado Sq. This single street may have started out as the city’s former red light district, but today it’s past has vanished into an array of Chinese-style shopfronts and souvenir stores with red-shuttered doors and old fashioned street lamps that line the entirety. Coffee houses, bubble tearooms and some of Macao’s oldest noodle bars can be found here, which make it a great place to try some local delicacies too! 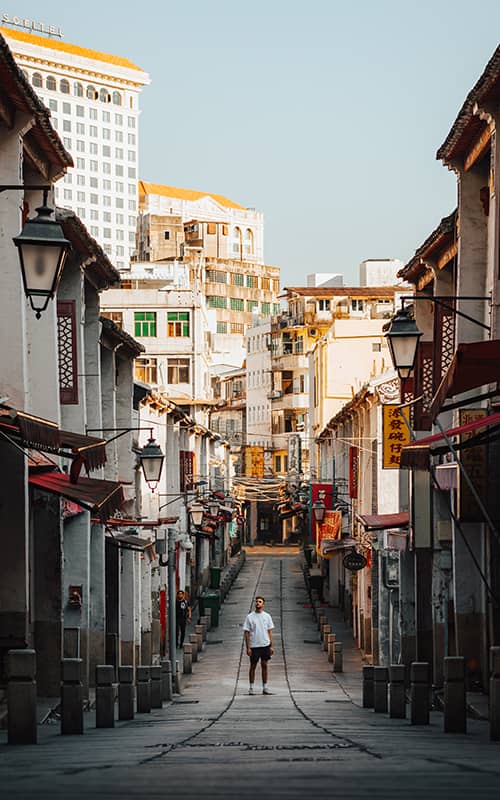 Situated 20 minutes out from the city center on the hillside lies the colorful fishing village of Coloane. This is where the Portuguese influence really shows with a stunning example being the Chapel of St. Francis Xavier – painted in sunshine yellow and teal blue. The facades here are the biggest attraction, along with numerous artistic wall murals. Right around the corner are the Painted Walls which are a pleasant stop off before making your way back to the hustle & bustle. 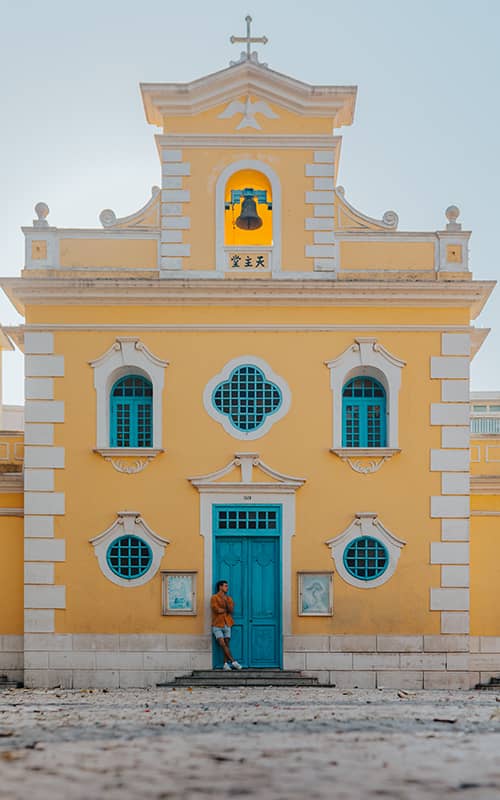 Want to trick your friends into thinking you’ve popped into Europe for a few days? Well in Macao you can do just that, without the jet lag and at a fraction of the cost. One moment you could be sipping champagne with an Eiffel Tower backdrop at The Parisian Macao to a gondola ride under the Rialto Bridge at The Venetian Macao. Fancy a trip to Rome? Wander in and out of the arches of their very own Coliseum at The Macau Fisherman’s Wharf. All of this can be done in a single day! 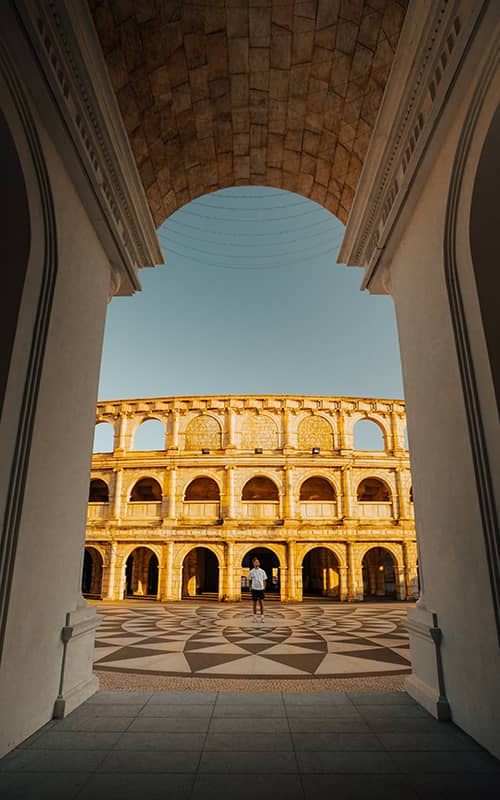 Nestled amongst the high rise living, the thriving São Lázaro district is an oasis of calm and tranquility. We simply stumbled upon it by chance and it turned out to be a beautiful discovery: Lou Lim leoc Garden is a unique Chinese garden with a Portuguese infusion. It has all the ingredients that you’d expect; Bamboo groves next to a dreamy pond abundant with Koy fish and sea turtles perched on rocks, a beautifully decorated pavilion and a tea house. Imagine the photo opportunities! Best of all, it’s more of a local hotspot that hasn’t hit the mainstream, so you won’t find it busy, and instead you’ll find it difficult to leave! 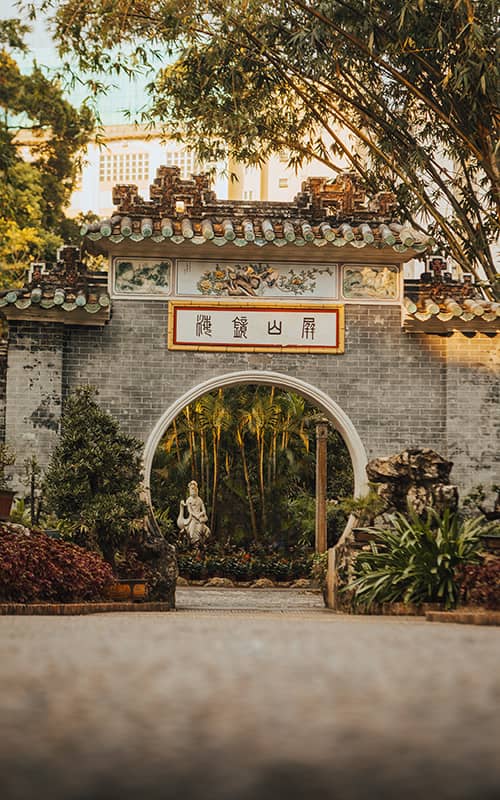 Art Macao at The Morpheus, City of Dreams

The newest addition to the Cotai area in Macao is the supernatural looking, Morpheus hotel which pioneers a new level in luxury. With its external, exo-skeleton appearance that impresses just as much as from the outside as on the in, it’s no surprise that this futuristic architectural marvel was designed by the late world-renowned designer Zaha Hadid. Inside of the City of Dreams complex is a specially picked collection of ever-changing contemporary art from a selection of worldwide artists including KAWS, Charles Petillon & Erwin Wurm up on Floor 23, which features daring views down the lobby atrium. I can assure you; you wouldn’t have seen anything like this place before! 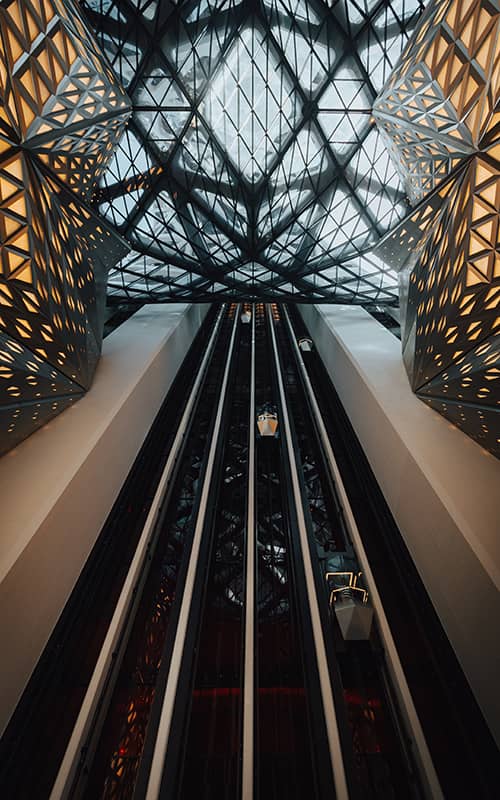 Interested in discovering more of Macao? We’ve got you covered. Explore more of this epic destination here.