We sent traveler, Sam Horine, to explore Toronto and highlight the best things to see in the city within 24 to 48 hours. See his guide below!

Toronto is always a good idea and while you could easily spend a couple weeks (or a lifetime) exploring the city, I recently found myself at Pearson International with just over 48 hours to spare. Here’s my consolidated guide to the best things to do and see with a one or two day stopover in Toronto. To discover more tips and tricks on a Toronto stopover or how to book, check here.

UP Express to Union Station

I arrived late in the afternoon at Pearson International Airport wide eyed and ready to explore Toronto after my flight with Air Canada. To get downtown, I took the UP Express train to Union Station in downtown Toronto. The UP Express is a quick way to get into the city with a travel time of only 25 minutes and a cost of ~$12.

After a quick refresh at the hotel, I headed out to meet some friends on Queen Street West. I let the locals pick the spot and we ended up at Ramen Isshin for their bounty of veggie friendly dishes (miso ramen with kale noodles?!? Ok yes please).  Afterwards it was a quick nightcap with some local beers across the street at Tequila Bookworm to round out the night. 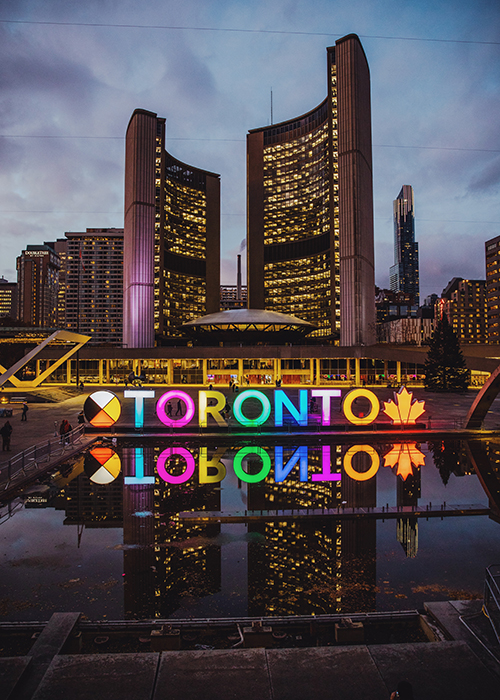 I’m not much of a breakfast person but I’d heard of vintage diner just down the street so off I went. Just around the corner from The Gooderham Building sits the George Street Diner. Painted bright red and serving up diner classics in a retro environment, it was the perfect spot to dig into some eggs and a never-ending cup of coffee.

A quick walk down the street, is the Distillery District – a former industrial area that’s seen it’s once bustling warehouses converted to chic shops and eateries. After some exploring, I popped into Arvo Coffee at the suggestion of a friend for a fantastic cortado. 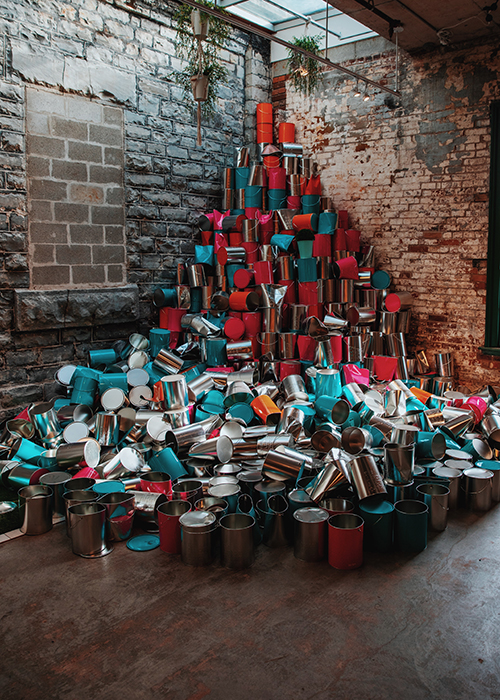 Feeling warmed on both the inside and out, I called a cab and headed across town to Queen Street West’s famed Graffiti Alley. The photogenic alley located directly behind QSW is filled with colorful murals and street art from both local and international artists. If you’re looking for things to explore in the city, this should definitely be on your list! 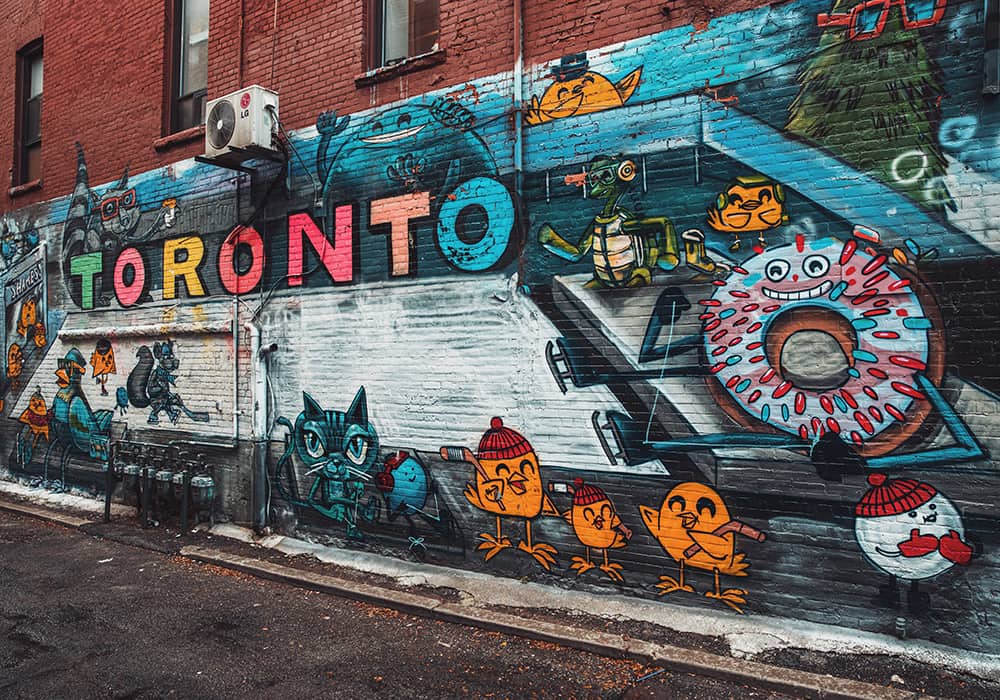 After a quick pit stop at The Burger’s Priest (they make an amazing chicken sandwich) I strolled down Queen Street towards downtown. Discovering some great views of the CN Tower and taking in the lovely street scenes on my way to City Hall Park. 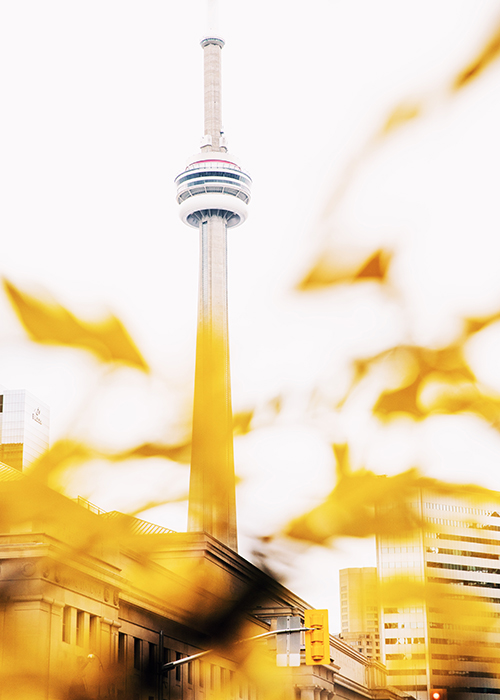 After a quick rest, it was on to see a Canadian sport staple – a hockey game. The Toronto Maple Leafs’ games are at the Scotiabank Arena and it’s easy to see why this beloved sport is so popular. I highly recommend catching a game if you’re exploring Toronto during the Leafs’ season. If not, check the schedule for Toronto’s MLB team, the Blue Jays or their NBA team, the Toronto Raptors. Hint for an epic view of a Blue Jays game, check out the rooms at Toronto Marriott City Centre hotel. They have rooms with a view of the field – amazing! The Raptors are having an amazing season and have must catch games as well.

The day started by heading out towards a true Toronto classic – the St Lawrence Market. Right downtown in Old Toronto (a 10-minute walk from the Fairmont) is one of the original markets of Toronto. Inside, it’s bustling but not overly crowded with shops and stalls selling everything from soup to nuts. Locals and tourists alike queued up for a peameal bacon sandwich on a roll. Not wanting to miss out on what was obviously a market favorite, I joined the line – who knew such a simple sandwich could be so good! 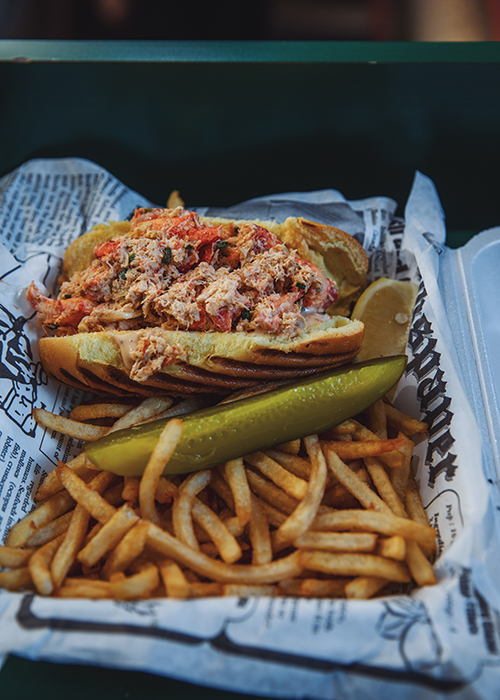 Next up was the Royal Ontario Museum – I’d originally planned to grab a cab but it was sunny, decently warm and I’d just had a bacon sandwich, so walking it was. After an easy stroll through downtown and across a lovely park, I found myself in the Yorkville neighborhood, home to the ROM with its impressively modern facade. Venturing inside, it’s easy to spend a lovely couple of hours checking out their vast natural history collection housed inside a historic building. 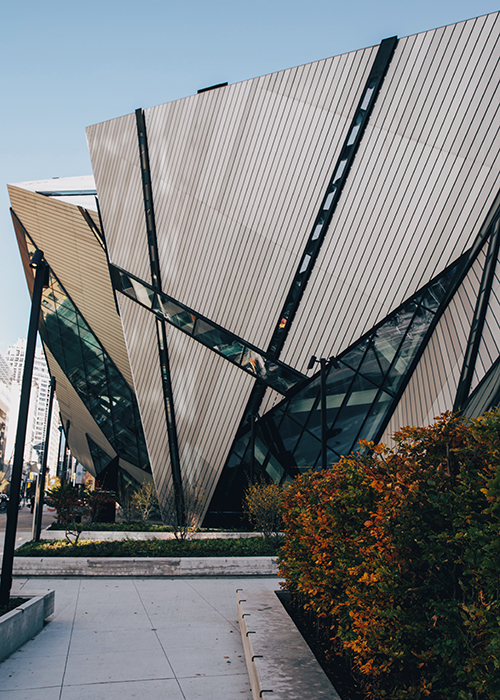 A quick cab ride later and I was back at the hotel to give the batteries a bit of a recharge before a sunset mission at the CN Tower. Feeling refreshed after a little downtime, I made my way towards the tower to watch the city lights come up as the sun went down. I’d run into a friend at the tower (visiting from London even – such a small world sometimes). After the sun sank below the horizon, we headed across the street back to the Fairmont to continue the conversation over a couple of happy hour drinks at the hotel bar, Clockwork. 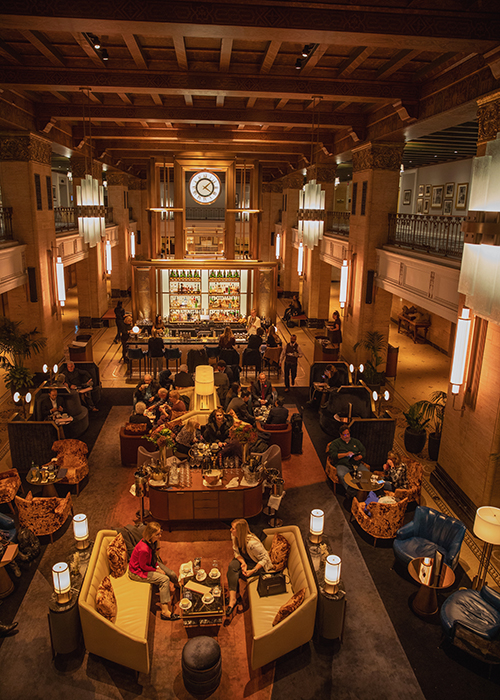 Bidding adieu to my friend I jumped into a cab for what were rumored to be some of the best Tacos in town at Campechano.  Apparently, I wasn’t the only one who had heard this rumor as it was packed at 8pm on a Friday night. Not to be defeated I put in my name and retreated across the street for a couple of drinks while I waited. A short time later my phone buzzed, and I found myself seated at a cozy corner table with a margarita in one hand and what was easily one of the best fish tacos I’d ever had in the other. Another must add to your Toronto list!

I was talking to a bartender friend of mine in Seattle prior to flying out to Toronto and he’d casually mentioned that if I did one thing in Toronto, I should check out Bar Raval –  recently been voted best cocktail bar in the city. Not wanting to miss out (fomo is real!) I jumped in the car and headed over. Raval was sadly closed for a private party (I guess I’ll have to go back) but it’s sister spot, Bar Isabel was around the corner and had a couple of bar seats open for a delicious mezcal nightcap. If you’re exploring Toronto – have a drink at Bar Raval or Bar Isabel for me!

At last my time in Toronto had come to an end. Getting back to the airport was a breeze and even arriving early, I had a ton of things to explore at the airport. Did I mention there’s free Playstation to pass the time between flights?! It was an amazing few days in Toronto and it reminded me what a perfect travel hack the Toronto Stopover is.