When on vacation it may be tempting to get a cute wildlife selfie to commemorate an exciting trip and post on social media. A quick photo might seem harmless, but it often means a lifetime of suffering for the animals involved.

Humane Society International, through our Latin America office, is a lead partner on a campaign led by the government of Costa Rica to stop tourists from taking pictures with wild animals. The #stopanimalselfies campaign, which was launched on October 25, 2019, aims to educate tourists about the cruelty and risks involved in the growing trend of taking selfie pictures in close contact with wild animals.

Putting wild animals in close contact with humans can cause the animals to experience immense stress and suffering. Sometimes these animals are drugged to calm them. Animals are often ripped from the wild to be exploited as tourist props. This can involve taking babies away from their mothers and even killing the parents. Animals stolen from the wild are forced to live in wholly unnatural conditions and often die. Even if animals are confiscated, they may be sent to pseudo-sanctuaries where they continue to be exploited for photos instead of released back into the wild. This poses a threat to the survival of wild populations and their ecosystems.

Wild animals are still wild, even when kept in captivity. Their behavior can be unpredictable especially when they are passed around from person to person for photo ops. These animals can become scared or distressed and can hurt people who get close to them. They can also carry diseases transmissible to humans and vice versa. Not only is smuggling animals from the wild for human interactions incredibly harmful, it is also illegal in Costa Rica and other countries. This practice also hurts people whose livelihoods depend on responsible wildlife ecotourism where animals are observed in natural habitats at a safe and respectful distance. Ending this practice will protect biodiversity for future generations. 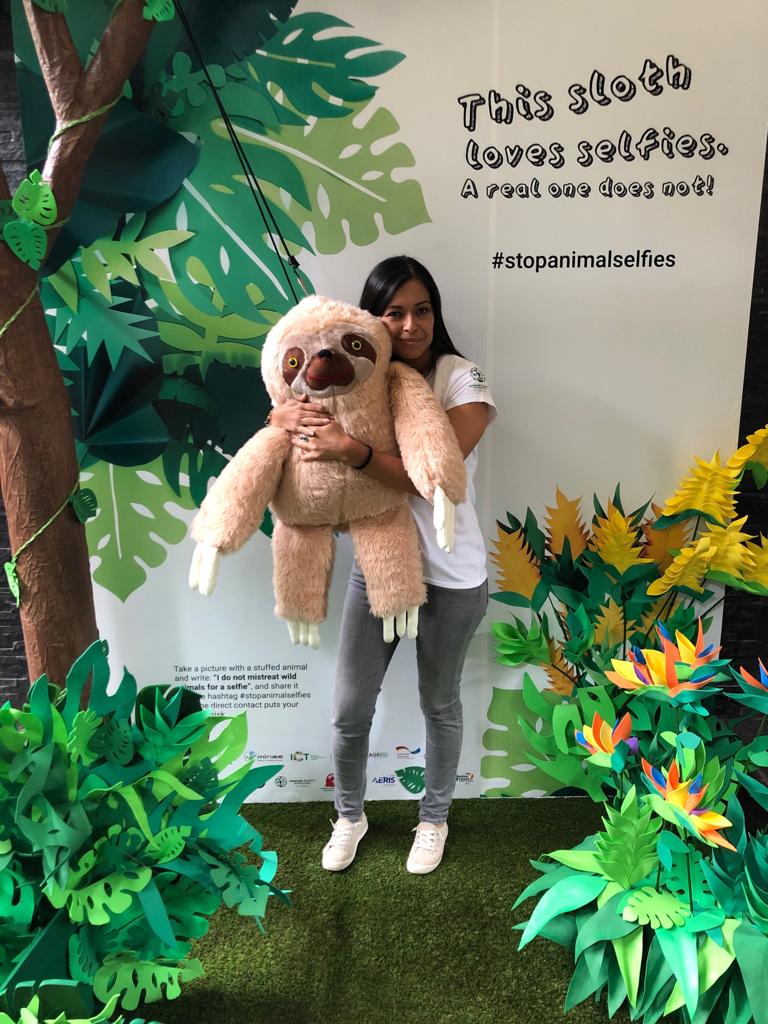 The #stopanimalselfies campaign aims to educate tourists about this abusive and harmful practice. When people refuse to take selfies with wild animals, they are helping to reduce demand and deter others from smuggling animals from the wild. Anyone can join the campaign by taking a picture with a stuffed animal (also known as a plush toy, plushie, or cuddly toy) and posting it to social media with this message: “I don’t mistreat wild animals for a selfie. #stopanimalselfies”

In Costa Rica, the government has placed photo booths with stuffed animals at the two main airports, hung banners in the airports and tourist sites, and created a campaign video being played on flights to Costa Rica, in airports, and at tourist sites. Animal plushies of native Costa Rican wildlife with the campaign message can be found for sale at souvenir shops. They also created a wildlife selfie code for cruelty-free photos and selfies with wildlife.

Though Costa Rica has started this campaign, the problem is hardly unique to Costa Rica. It is prevalent around the world—anywhere and everywhere there are tourists and wild animals. (Read our blog on lion cubs in South Africa.) HSI and the government of Costa Rica hope this campaign will be adapted for use in other countries and regions as well. Your participation in this campaign can even help persuade other countries to adopt laws like Costa Rica has against direct contact with wild animals and capturing animals from the wild. So, go find a wild animal plush animal to take your selfie with and post it to your favorite social media channel. You can be part of the change! #stopanimalselfies