10 fairy-tale places you can visit in real life

Magical glowing caves, quaint little towns, enchanting mountaintop castles—these places may sound like scenes from a children’s storybook, but the world is filled with fairy-tale places that really do exist. Start planning your idyllic fairy-tale vacation to these 10 dreamy locations around the world.

1. The Isle of Skye, Scotland 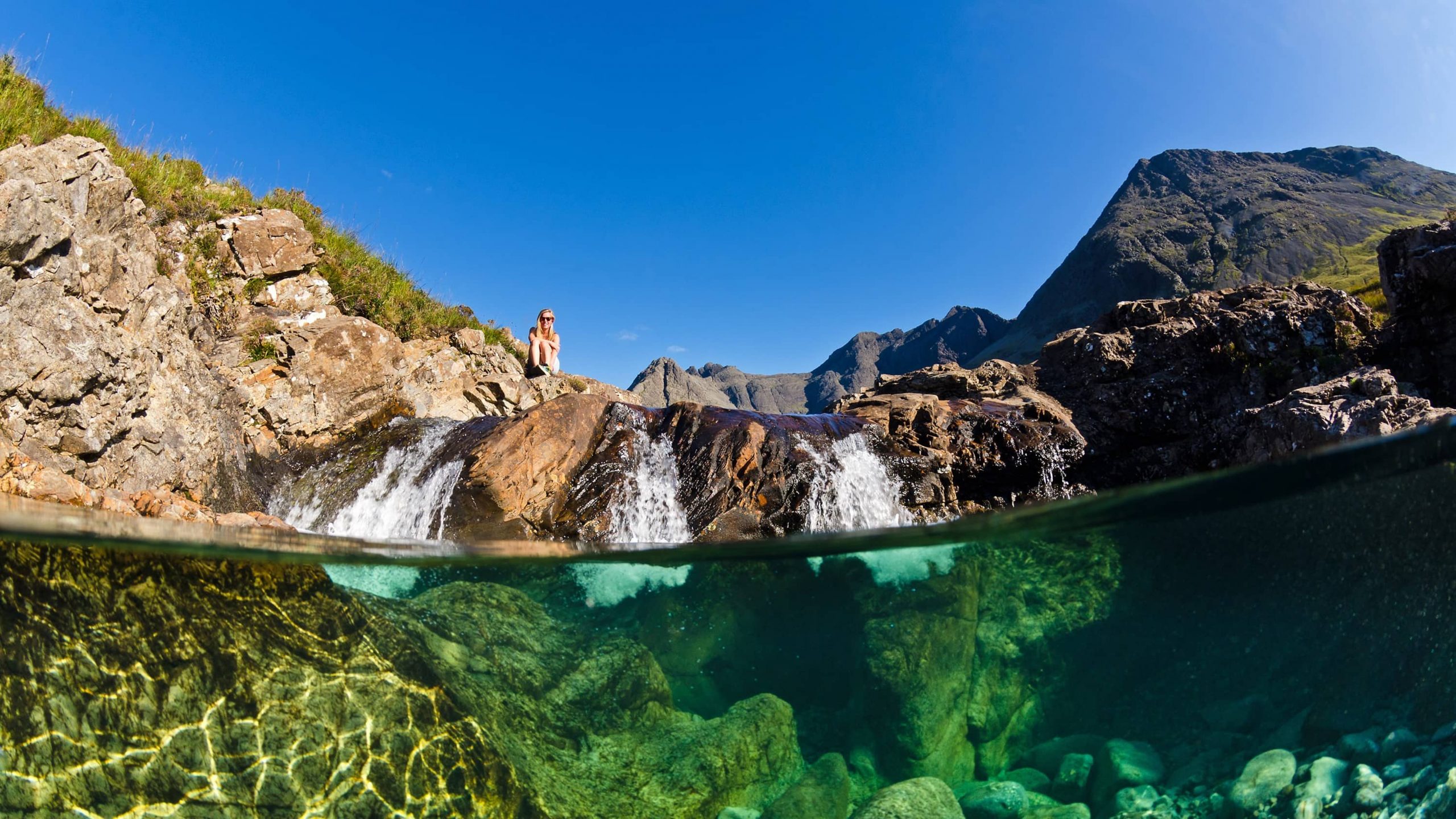 You’d think somewhere called the “Isle of Skye” must be an enchanted fictional place, but the wing-shaped island in Scotland is very much real, and its fairy-tale landscapes are brimming with folklore. Spend a meditative moment in the Fairy Glen, which resembles Scotland’s mountainous countryside in miniature and just the sort of place you might spy some fae folk. Then, hike to the pretty Fairy Pools at the foot of the Black Cuillins Mountains. Hopping across stepping stones along the way, you’ll reach a series of cascading waterfalls and amazingly clear pools where you can reward yourself with a swim. But beware, the water is quite cold.

Round out your trip with a visit to The Old Man of Storr—a jutting rock formation said to be the thumb of a long-dead giant buried there. Make the most of your visit and join a guided tour of the Isle of Skye to see all the tucked-away places and learn all the folk tales from a local. 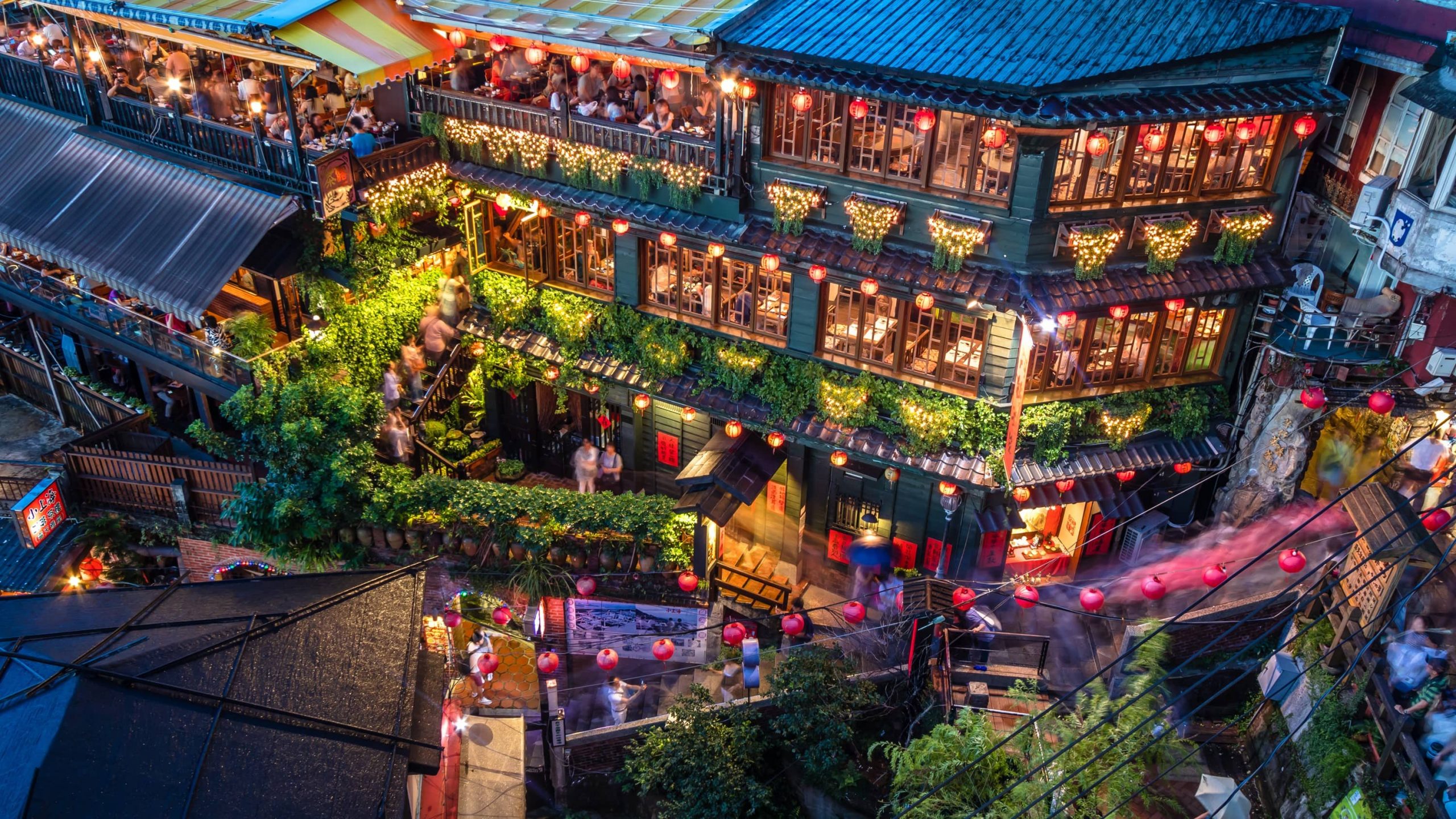 It’s easy to quickly feel as though you’ve been transported to a fantasy land wandering beneath the glowing lanterns of Jiufen. But foodies also flock to this mountain village outside Taipei for some of the best street food in Taiwan. The mouthwatering smells of Jishan Street invite you to try everything from tea eggs to grilled snails to the famous peanut ice-cream wraps.

Be prepared to climb a lot of steep stairways through the very Instagrammable Old Town, then settle in at the beautiful A-Mei Tea House to rest your tired feet. This vine-covered building serves tea and snacks on a cozy rooftop deck with sweeping views of the nearby coastline. 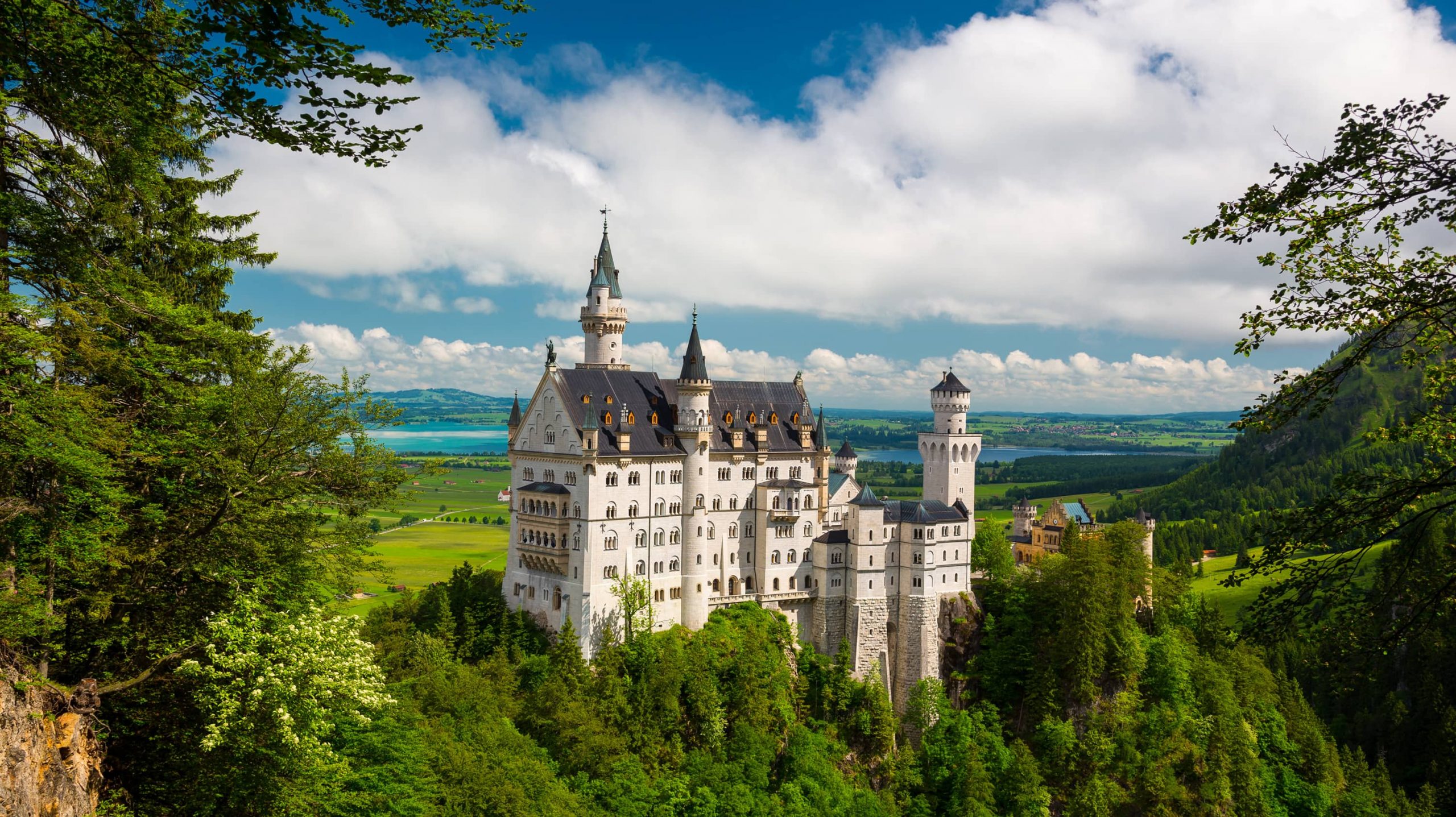 Perched on a hilltop with its towers and turrets reaching towards the sky and the majestic Bavarian Alps as its backdrop, Neuschwanstein Castle resembles a storybook illustration brought to life. King Ludwig II of Bavaria commissioned the opulent castle in 1868 to be his future home, but his untimely death meant he never saw the ambitious project finished. Now one of the most visited castles in the world, you’d be right in thinking its façade is more than a little familiar—it also served as the inspiration for Sleeping Beauty’s castle in Disneyland.

You can tour through Neuschwanstein Castle’s intricately decorated and lushly painted rooms, including the grand throne room and the king’s bedroom. And while it is a popular spot, it really is worth taking the extra time and effort to hike up the nearby hillside to Mary’s Bridge where you can marvel at the unobstructed view of the entire castle in all its glory. 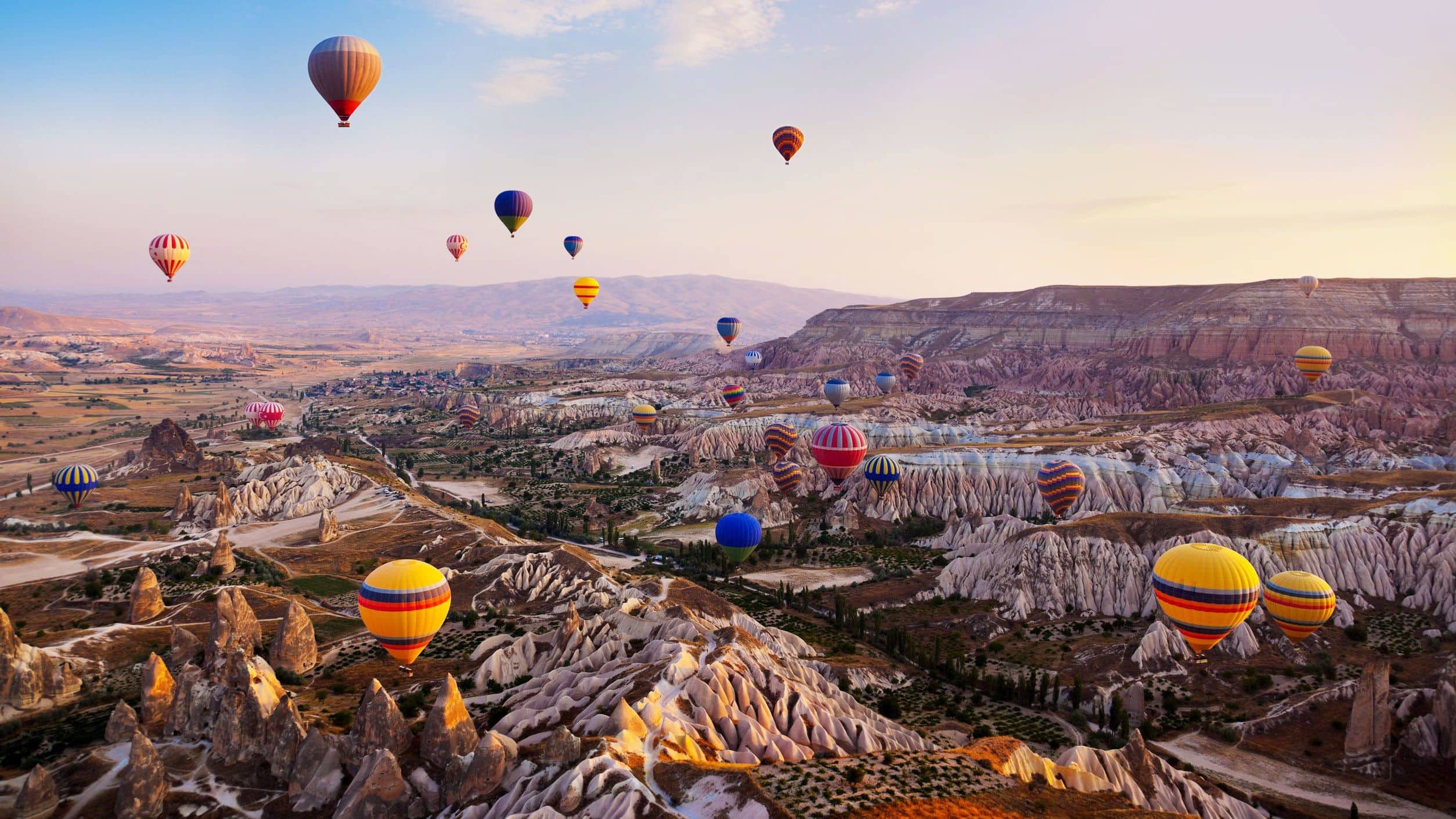 From soaring above the chimney rock formations in a hot air balloon to traversing the tunnels of an underground city, the Cappadocia region of Turkey offers fairy-tale views around every corner. Ancient settlers literally carved their homes into the area’s unique stone pinnacles. Explore cave dwellings and rock-cut churches painted with vibrant frescos at the Goreme Open-Air Museum. And don’t miss the breathtaking views from the top of the Uchisar Castle.

Up the wonder factor by staying in a luxurious cave suite in a hotel carved right into rocky landscape. You can even sip Turkish coffee on a rooftop terrace while watching the hot air balloons take flight at sunrise. 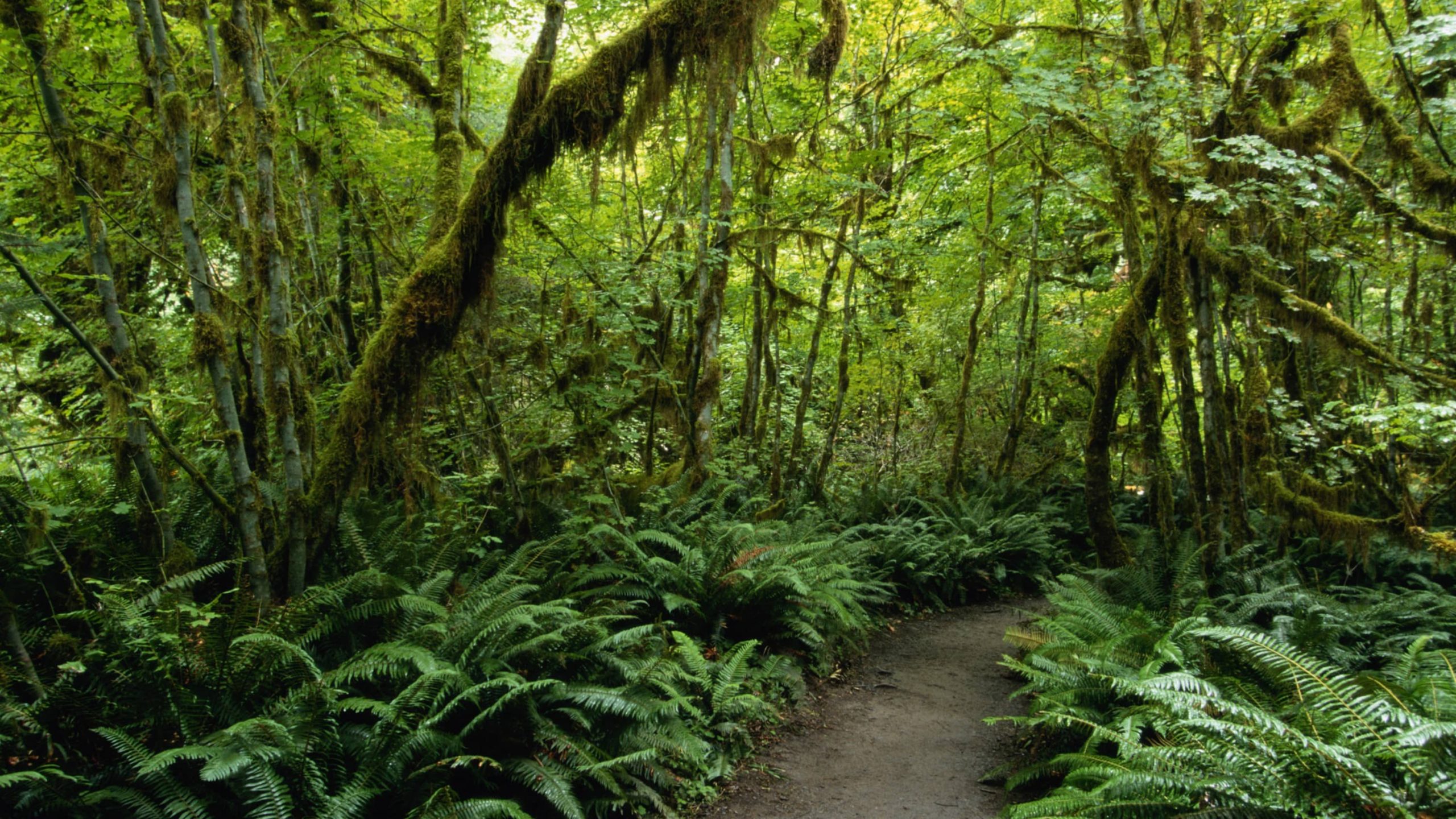 Imagine this—nothing but the unfurling fronds of ferns line your path. A little wren sings from a huckleberry bush, then flits into the undergrowth. Ent-like trees, furred in thick, green hanging moss, spread their branches above you. It might sound like a fantasy tale, but you only need to journey to the Hoh Rainforest in the Olympic National Park of Washington State to experience it.

Take a day trip to from Seattle to explore the Olympic National Park’s unique ecosystem. Misty or rainy weather adds to the area’s allure. Just be sure to pack some rain gear because the Hoh Rainforest is, well, a rainforest after all. 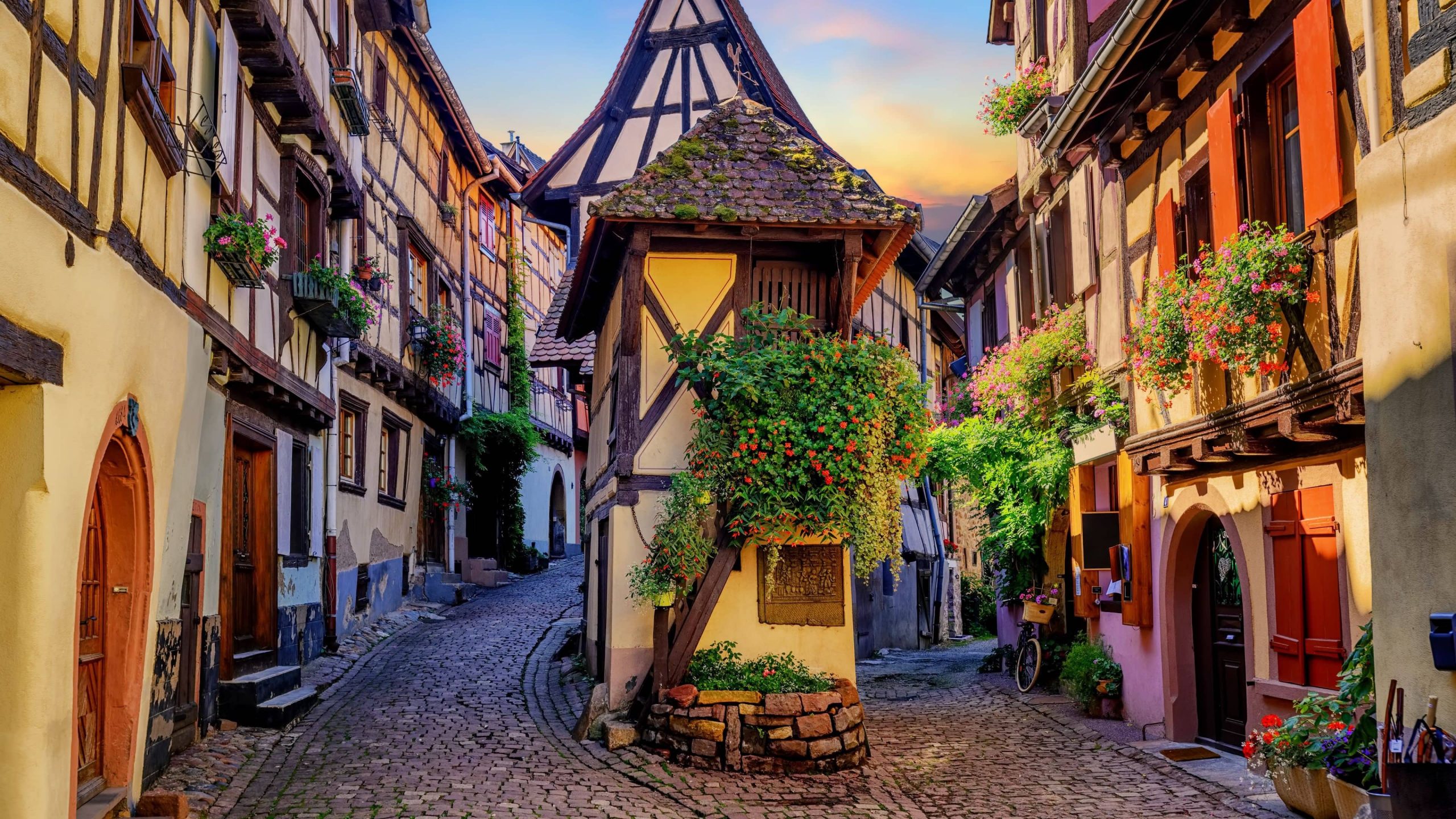 Belle may have wanted to escape her provincial life in Disney’s Beauty and the Beast, but the charming villages in the Alsace Region of France make for the perfect fairy-tale getaway. The region’s towns of Riquewihr and Ribeauvillé were the artistic inspirations for Belle’s hometown. Sing a cheery bonjour to the local baker as you stroll past colorful timber-framed houses decorated with a bounty of hanging flower baskets.

Plus, the Alsace Region is famous for its wine. Visit local vineyards to sample vintages like Pinot Gris, Riesling, Muscat, and Gewurztraminer. You could easily spend your whole vacation relaxing in this dreamy setting or take in Alsace’s castles and villages on a day trip from Strasbourg. 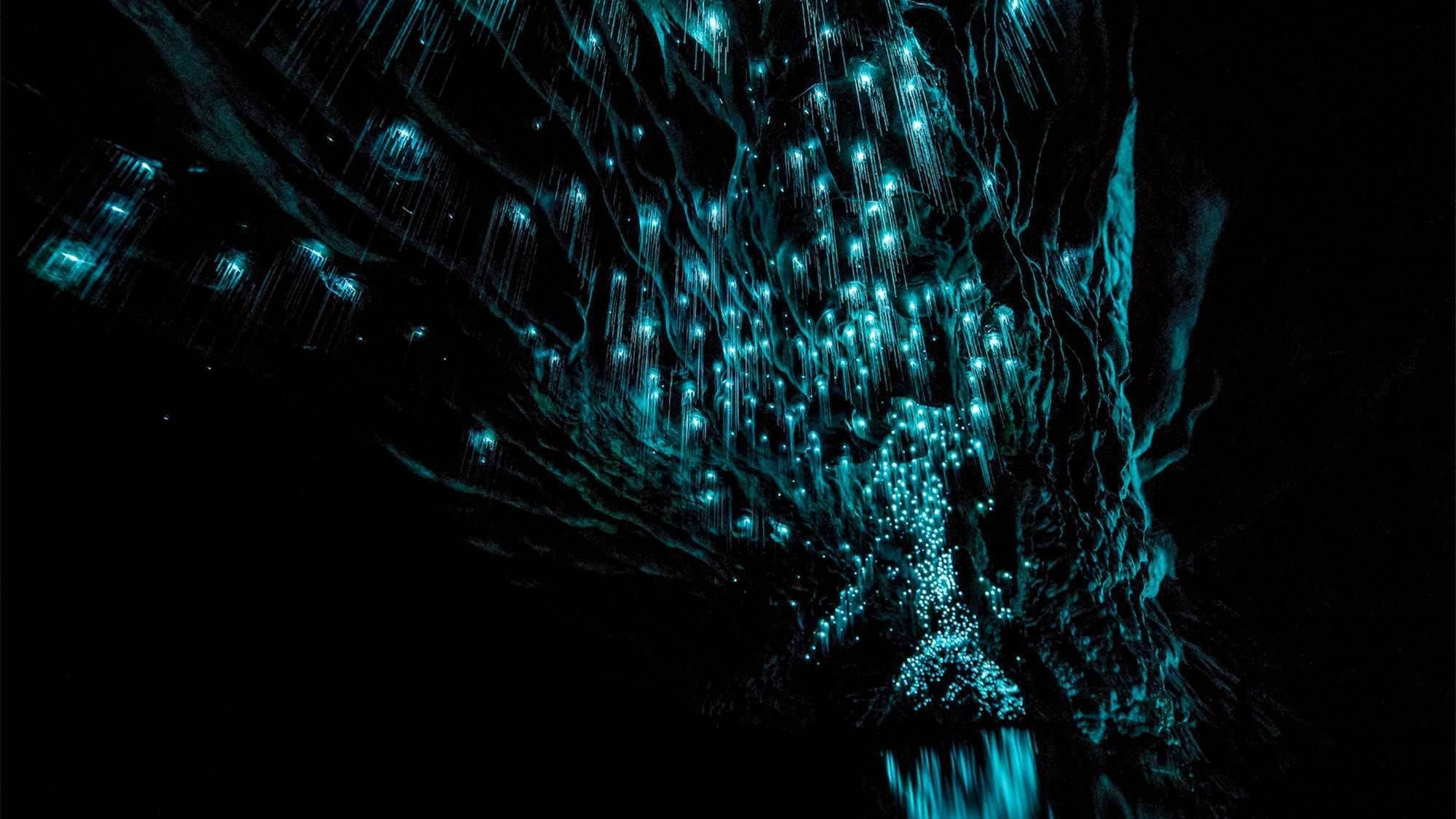 In books and movies, places like caves typically house dragons or magical artifacts. But in New Zealand, the Waitomo Glowworm Caves beckon you with a different kind of enchantment.

Descend below ground and past stalagmites and stalagmites formed millions of years ago. Test out the amazingly pure and resonant acoustics of the naturally formed Cathedral chamber. Then, board a small boat and glide across a dark underground river. As if by magic, the cave ceiling twinkles with the turquoise light of hundreds of tiny glowworms. Learn about the Maori folklore surrounding these mystical caves and their glowing inhabitants before returning to the daylit world. 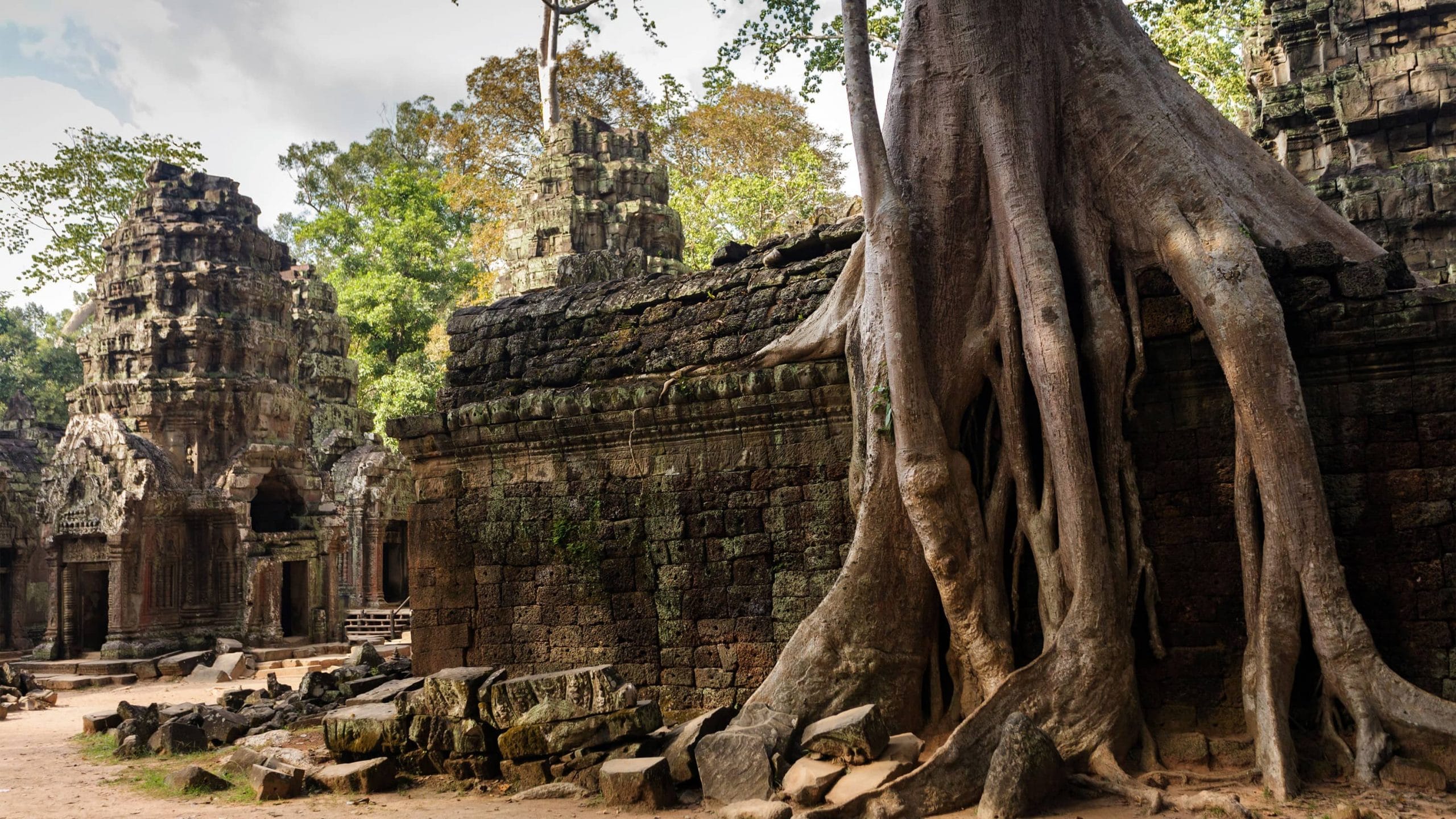 Ta Prohm Temple’s crumbling ruins in Siem Reap, Cambodia have slowly transformed over the years into an incredible combination of the natural and architectural. The roots of enormous strangler figs snake over, around, and through the remaining buildings, creating an impressive sight to behold.

The temple is part of the Angkor Wat complex, which contains dozens of awe-inspiring temples, and many tours include a stop to the enchanting Ta Prohm Temple. You can easily spend multiple days exploring the area on an exotic adventure. Be sure also to check out the Angkor Wat temple’s detailed carvings and the huge serene faces of the Bayon Temple.

9. The Garden of Ninfa and Park of Monsters, Italy 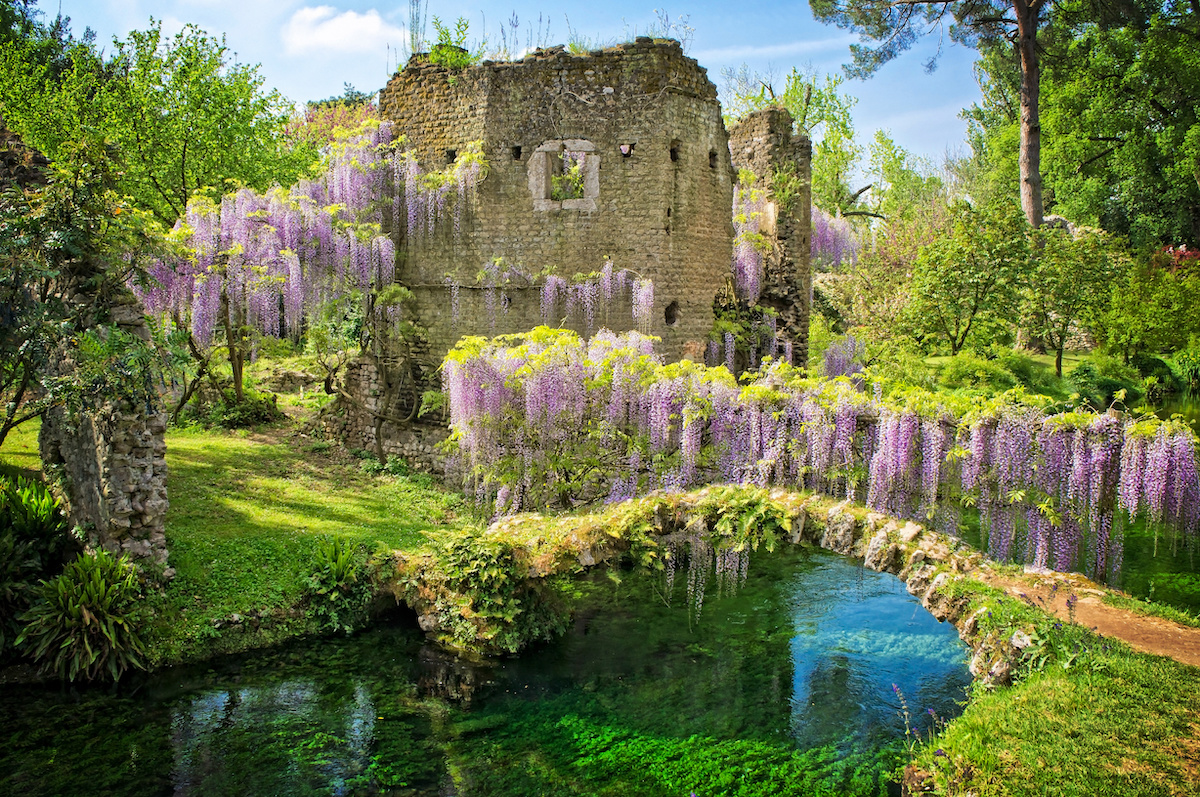 Head south from Rome to seek out the spectacular Garden of Ninfa. Only open to the public on set days between March and November, the romantic garden is considered one of the world’s most beautiful by the New York Times. Walking around the ancient ruins covered in blooming flowers, it feels like you could meet dancing nymphs or mythical tree spirits around every corner.

And what’s a fairy tale without a few monsters? The Park of Monsters in the Garden of Bomarzo is a few hours north of Rome and was commissioned by Prince Pier Francesco Orsini in 1552 to be an expression of grief after the death of his first wife. This surreal garden contains massive sculptures of dueling giants, strange creatures, and a screaming stone monster whose mouth houses a lovely picnic table inside. 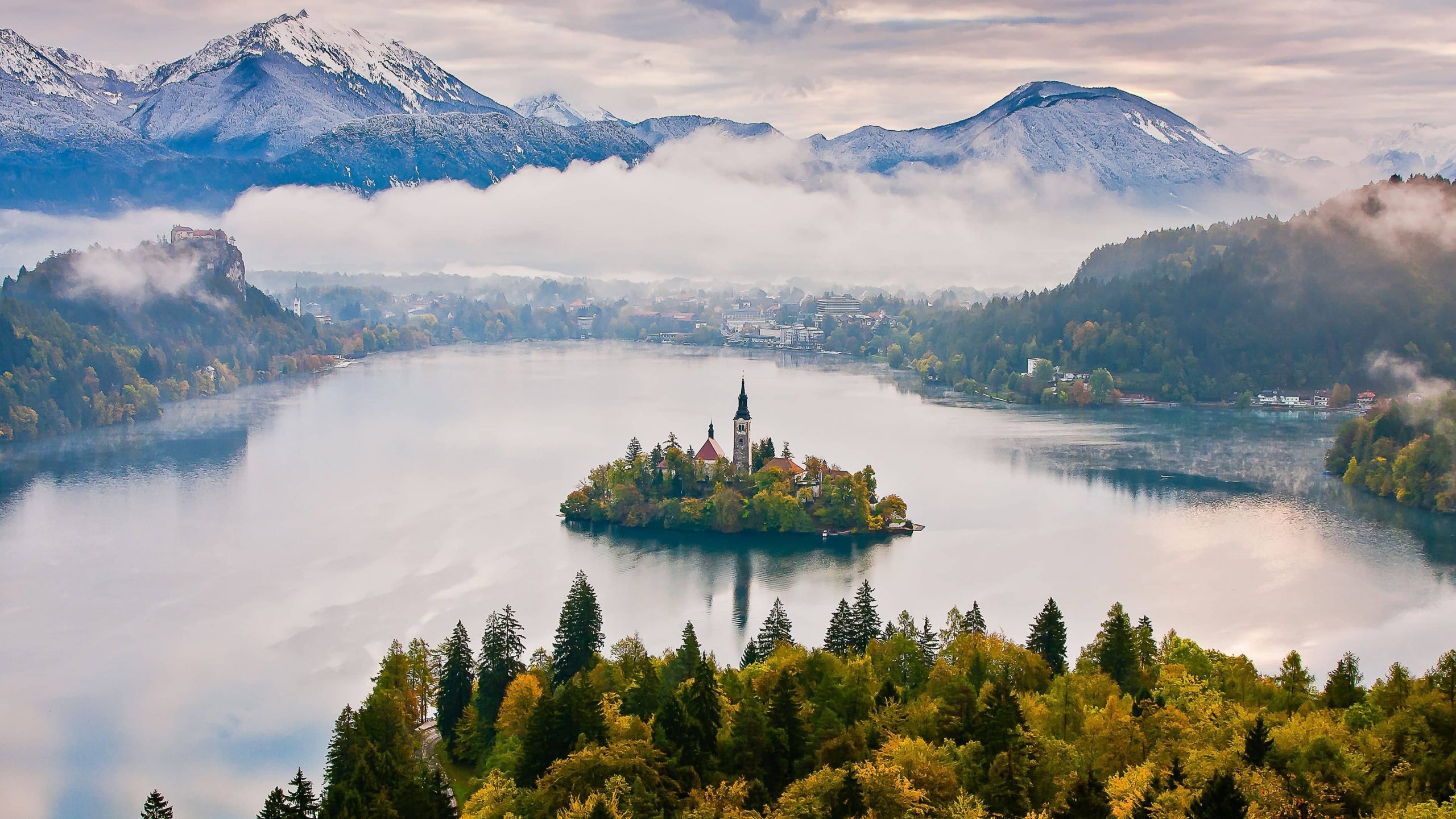 From the Dragon City of Ljubljana to the romantic Lake Bled, Slovenia is full of fairy-tale places. Journey to the Julian Alps, not far from Ljubljana, and for some the best views of the lake’s iconic island, head to Bled Castle. You can tour the museum, enjoy a meal at the restaurant, or go wine tasting in the castle wine cellar.

No trip to Lake Bled would be complete without a boat ride to Slovenia’s only true island. After docking, ascend 99 steps to the beautiful Church of the Assumption of Maria. According to legend, if you ring the church’s bell three times, your wish will come true. And, of course, you can’t leave the area without trying its famous cream cake. Both fluffy and custardy, it’s sure to send your taste buds on their own delicious adventure.

This article was written by Camille Meyers, an activities expert at Expedia.

From adventure to mindfulness, to trying new things and putting our phones away, these are the biggest travel trends you'll see in 2022.

10 fairy-tale places you can visit in real life

Start planning your perfect fairy-tale vacation to these enchanting locations around the world.