Explore > Destinations > Istanbul > What to Do When Visiting Istanbul

What to Do When Visiting Istanbul

Few cities in the world can boast the culture, history and grandeur of Istanbul. Founded over a thousand years ago as the Greek colony Byzantium, the city later grew into its importance as the capital of the Eastern Roman Empire as Constantinople in 330 CE. The city finally changed hands, and names, again in 1453 with the Ottoman conquest under Sultan Mehmed II.

Since then, the city of Istanbul has been a truly global city, and one cited as a bridge between Eastern and Western cultures and societies. The city’s cultural and historical sights certainly reflect this long and illustrious history. With each foot in Europe and Asia, Istanbul represents a diversity of cultures found nowhere else in the world.

As a major transportation hub between Europe and Asia, Istanbul is relatively easy to get to from anywhere in the world. Istanbul has two major airports, Ataturk and Sabiha. Most major airlines fly into both airports, as well as native Turkish Airlines, which has bases in most parts of the world.

One thing to keep in mind is having a valid visa, which can be applied for online. For all American visitors, a valid passport and visa is needed to enter Turkey. The visa is also valid for a maximum of 90 days.

Once you arrive, staying in Istanbul is easy. As one of the largest cities in the world, Istanbul has a wealth of hotels, vacation rentals, and other visiting accommodations.

The Sura Hagia Sophia Hotel is family friendly and located in the central historic district. Only a two minute walk from major public transportation hubs, the Sura Hagia Sophia Hotel is a great place to stay for those interested in sightseeing the city. The Grand Hyatt is a great choice for a stay in a luxurious environment in the center of the city. The Renaissance Istanbul Bosphorus Hotel is also a great choice. Located on the European side of the city, its rooms look down on the Bosphorus, giving you a view on the city’s straddling of Europe and Asia.

The city of Istanbul is full of incredible sights, sounds, smells and tastes. In a city brimming with palaces, churches, mosques and other sights, here are just some of the best to include in your trip to Istanbul. 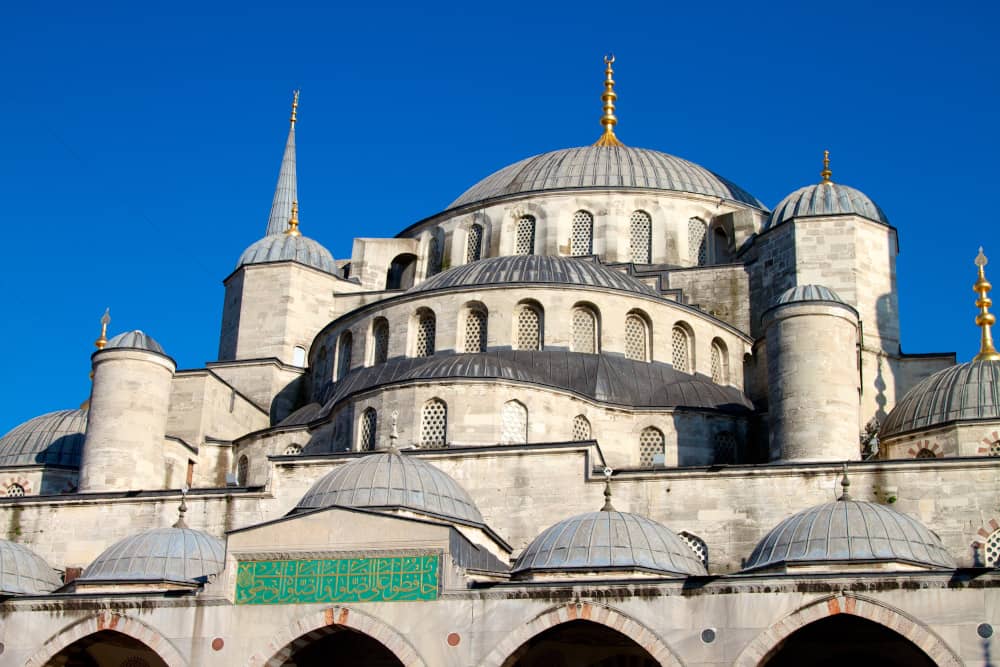 Otherwise known as the Blue Mosque for the beautiful tile work that adorns it, this functioning house of prayer and worship was built in 1616. Expect to see many in prayer when you visit. Conservative attire, with legs and shoulders covered (but no shoes inside) is a must.

This museum originally was a Greek Orthodox Church before it was converted into a mosque after the Ottomon Turks conquered Constantinople in 1453. What’s so unique about this museum is that you see imagery and symbolism of both religions displayed throughout, a reminder of Turkey’s religious history and diversity.

Sunset cruise along the Bosphorus Strait

Some of the best views of Istanbul are from the water, especially at sunset. Seen here is the New Mosque, built between 1660 and 1665.

Taking in the spice market

Shopping in an Istanbul market has its own energy and vibe.  Shopping for spices is a perfect way to absorb the sights, smells and tastes of Istanbul.

Go to the Grand Bazaar with plenty of time to spare. Not only is there a lot to see (and shop for), but there also are many hidden alleyways and stairs; these are fun to explore because they lead into some pretty spectacular places.
The Grand Bazaar has everything from souvenirs to jewelry, scarves, or handmade Turkish rugs. The Bazaar also has plenty of shops and restaurants for food and refreshment.

House of the Virgin Mary

To explore more of Turkey’s diverse history, one must travel outside of Istanbul and up to Mt. Koressos, near Selcuk. There you will find the house of Mary, mother of Jesus, where she lived till her death. Many believe John finished writing the Bible here.

Some say Turkish coffee and Greek coffee are the same. They are similar in many ways except in how they are brewed. Pictured here is the traditional way in which Turkish coffee is prepared. Feeling tired? This will wake you right up!

Located outside Istanbul in Ephesus, the Basilica of St. John was constructed by Justinian I in the 6th century. It is believed that the burial site of John the Apostle is located here. The views of the valley and the village from here are outstanding.

Escape to the beach

Ladies Beach is a popular beach located in the beach town of Kusadasi. This beach was once segregated for women only, and now is open to all. (It also is a favorite local hangout on weekends and during the summer months.) There’s nothing like bathing in the Aegean sea and hanging out with locals!

This UNESCO World Heritage Site is 14,000 years old! Visitors are welcomed to take off their shoes and walk over and into the hot springs and travertines. The name means “white castle,” which describes the layers of limestone walls that make up this spectacular destination.