From pumping out a few push-ups to being a true knight in shining armor, Justin Trudeau has charmed the socks off not just his fellow world leaders, but the entire world!

We’re not kidding. The Expedia Trudeau Travel Effect is out—citizens from around the world are flocking to Canada to get a piece of the action. We’ve looked at the increases in visitors to Lumberjack Country since Trudeau took office, from 2015 to 2016, and the results speak for themselves.

From Europe and Asia, to all the way down under, travelers are turning their attention to Canada. It turns out the Romans are most eager, with around a 65 percent increase in tickets to Canada from 2015 to 2016. Perhaps they see a little bit of Julius Caesar in Trudeau… The Singaporeans are close behind, with Expedia seeing roughly a 55 percent increase in tickets from the city slickers. They’re soaking up all that fresh Canadian country air. Sydneysiders follow suit, with a nearly 35 percent increase in Aussies from the harbor city hopping on a plane to Canada. He captured the heart of their royal princess so it’s no surprise Londoners are up nearly 30 percent on visits to Canada, hoping to catch a glimpse of Trudeau’s charm for themselves. Parisians are a romantic lot and there’s been a roughly 25 percent increase in travelers from the City of Love to Trudeau’s turf.

True, catching a glimpse of Trudeau is not the only reason to travel to Canada, which celebrates its 150th birthday this year, but if your heart has been captured by oh so dreamy Trudeau, here’s how to travel in his footsteps.

The nation’s capital is not only the current home of the Prime Minister, and his birthplace, it’s also bursting at the seams with cool cafes and award winning cultural experiences. It turns out politicians and pastry are a winning combination—head down to Byward Market to try the same Beavertail pastries Barack Obama indulged in on his last visit, before checking out Trudeau’s current stomping grounds at Parliament Hill.

Fresh mountain air does even world leaders a world of good—last year Trudeau took his cabinet to Alberta to get a good dose of it. His retreat took place in Kananaskis, at the foothills of the Rocky Mountains just an hour drive west of Calgary. Pack your hiking boots because Expedia has plenty of charming mountain cabins you can book for your own mountain retreat.

Want to party like a prime minister? This year Trudeau joined Vancouver’s Chinese New Year Parade, along with dancing dragons, marching bands and musicians. Chinese New Year is a great time to visit the city, with dozens of events including fairs, exhibitions and festivals, bringing the city to life. And it’s a great excuse to sample some of Vancouver’s best Asian restaurants—Dynasty Seafood, Bamboo Grove, and the Golden Swan should be top of the list.

He even looks good in ski gear. That’s right, Trudeau and his wife spent a day on the Whistler ski fields this winter. The snowboarder carved up the powder and was kind enough to pose for plenty of pictures, so consider Whistler for your ski holiday next season. Don’t think you can keep up with him on the double black diamonds? Expedia has plenty of activities like snowmobiling, dog sledding and snowshoeing to get you out on the snow.

Whether you’re a die-hard Trudeau fan, or just have an appreciation for all of Canada’s natural beauty, there’s never been a better time to get out your passport. 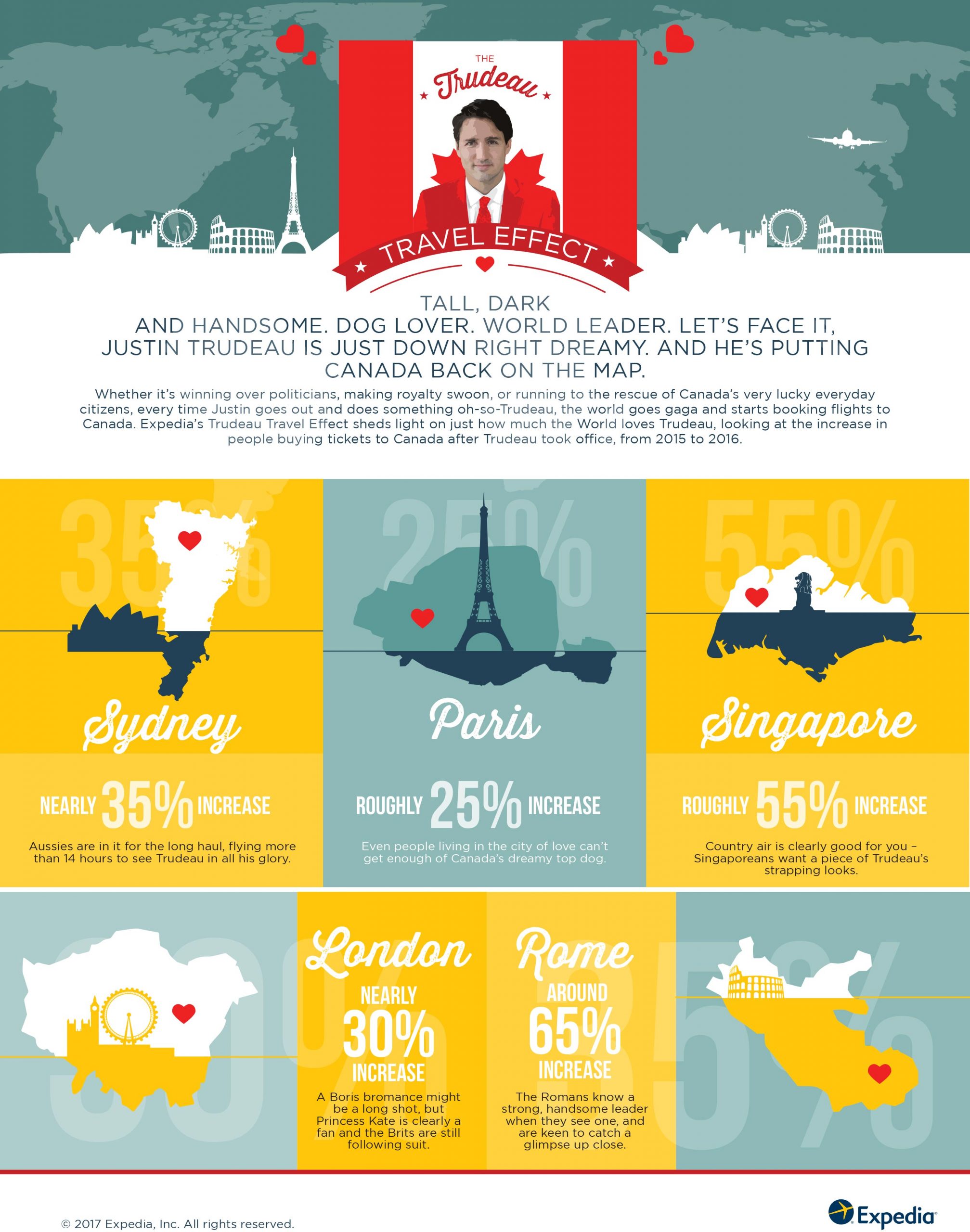 Craving a Canadian getaway? What cities are on your list?

Thrill seekers take note, these pulse-quickening adventures will inspire conversation fodder for years to come—as well as plenty of amazing photos for your Instagram.

Canada is home to some amazing museums and thanks to virtual tours, you can now visit many Canadian museums without even leaving your house.

8 Things to Do in the Canadian Prairies this Winter

While winter in the prairies can be fierce, with cold temperatures and frequent snow; these 8 activities show that winter doesn't have to ruin your trip.

The ultimate guide to planning a Canada New England cruise