If you’ve ever explored the south during the summertime, you probably sweat at the mere thought of spending the day outside. But summer in Southern California is different. SoCal’s ocean breezes are like a giant ceiling fan, keeping the temperatures just right—so you’re free to frolic around the great outdoors without getting lost in a haze of humidity. And do we even need to mention the scenery? With its coastal bliss and mountain wilderness, SoCal is a diverse outdoor oasis begging you to come out and play.

Al fresco attractions abound in this West Coast stretch, from secret gardens to cultural awakenings, and you can experience it all this summer. Slap on some sunscreen and your favorite shades, and get ready to tackle our list of 20 epic outdoor activities in Southern California: 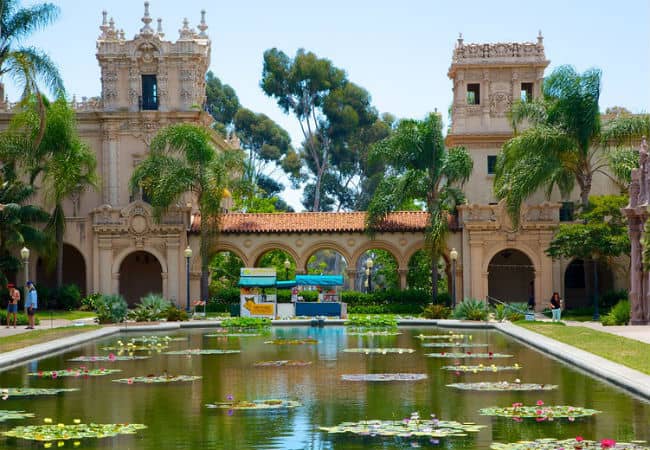 Not all the best things to do in San Diego are at the beach. Ditch salty air and grains of sand for the grassy lawns and leafy gardens of Balboa Park. The urban park includes 1,200 acres of green open spaces and hiking trails. The elaborate promenade, El Prado, runs through the center of the park, surrounded by perfectly manicured gardens overflowing with native plants, exotic cacti, and even fruits and vegetables. The grand park also features outdoor art—including the buildings themselves. Take in the San Diego Museum of Art’s sculpture garden, where you can enjoy local brews and food at terrace restaurant Panama 66. 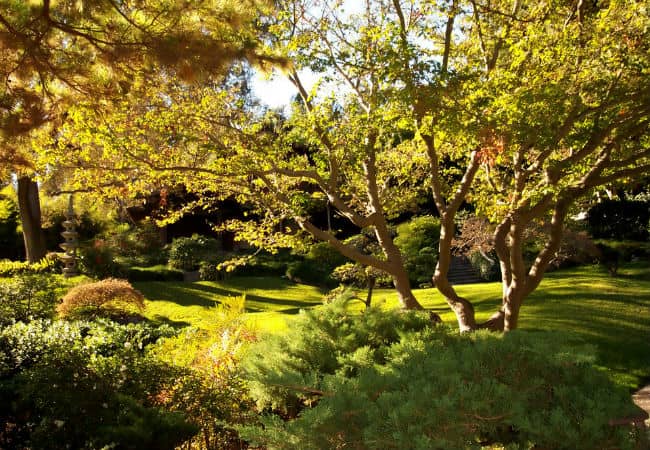 The Huntington Library gardens (10 miles northwest of downtown Los Angeles) look as though they’ve drifted off the pages of a fairytale. Koi ponds and a moon bridge create a meditative retreat in the Japanese Garden, while Shakespeare Garden is in full bloom with flowers that appear in the playwright’s most famous works. Dance among butterflies and hummingbirds, and find shade under more than 200 lush palm trees while you explore the 16 garden areas. 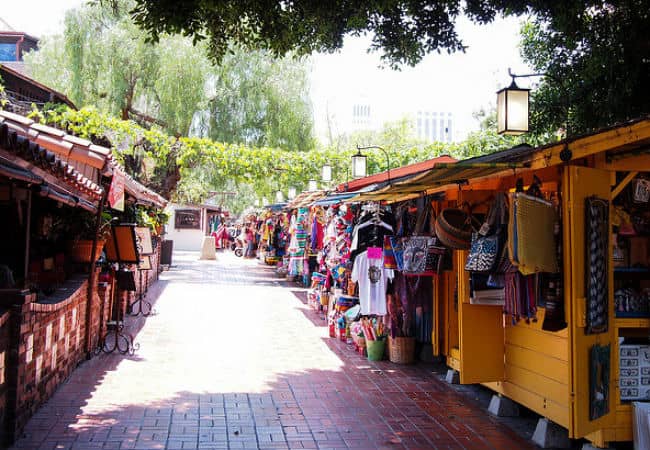 Flickr via Peter C in Toronto Canada
The smell of taquitos will waft under your nose as the hand-painted pottery catches your eye. Olvera Street, known as “The Birthplace of Los Angeles,” launches you into the sounds and sights of authentic Mexican and Aztec culture. The outdoor marketplace dates back to 1930, and some of today’s vendors are the descendants of the street’s first merchants. Snake your way through the stalls, sampling tacos and walking to the tempo of the mariachi music. 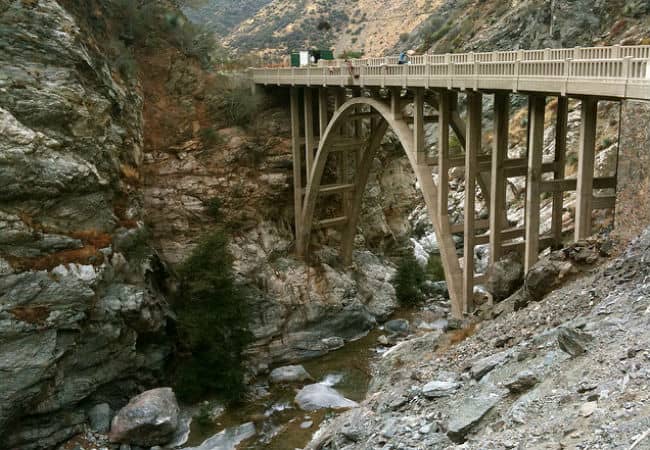 Flickr via Brian
Just east of Los Angeles, trudge nine miles to the eerie 1936 Bridge to Nowhere, a photo-worthy lonely structure without any roads leading to it. Over river crossings and around the Sheep Mountain Wilderness, the rustic trail winds through canyons and valleys along the banks of San Gabriel River’s east fork. Catch your breath and cool off in the swimming holes along the way. Once you arrive at the bridge, hook up with Bungee America to take a leap of faith, while shouting a fearless “Geronimo!” on the way down. 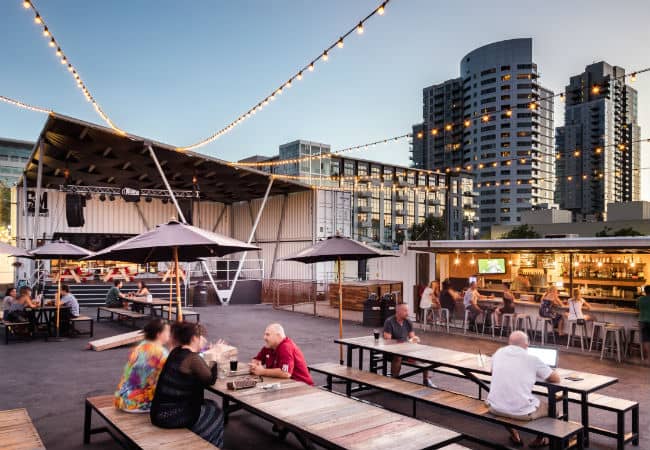 Photo via Quartyard, San Diego
Craft brews, dogs, and sunshine are the epitome of San Diego vacations. The Quartyard, which was a space for shipping containers, is now an urban park in downtown San Diego’s East Village. With a craft beer garden, dog park, meatery, and coffee shop, this outdoor space is perfectly equipped for all kinds of events from farmers markets and concerts to cultural events and movie nights—even rotating food trucks roll through this hot spot. 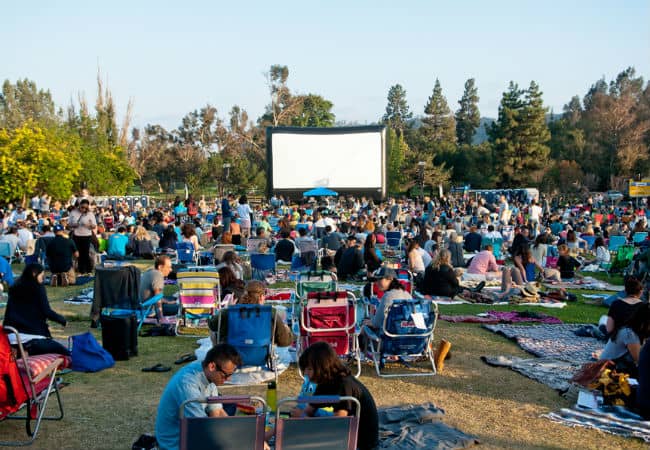 The Eat|See|Hear summer series is like a drive-in movie theater experience—but way cooler. Not only do you get to watch your favorite flick under the stars, but you can spread out on the lawn, dive into some food truck grub, and jam to local SoCal bands before the movie even starts. The outdoor theater rotates around different outdoor parks across LA, such as Centennial Square at Pasadena City Hall and Autry Museum in Griffith Park, but they all project a movie on the West Coast’s largest outdoor screen.

The Deck on Laguna, Laguna Beach 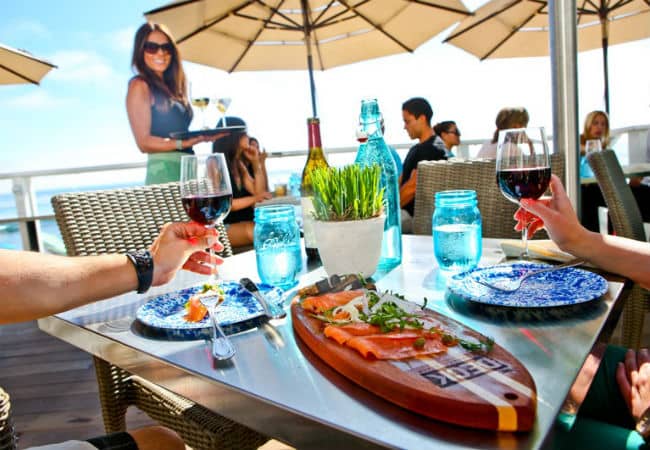 Photo via The Deck on Laguna

When it comes to brag-worthy SoCal adventures, The Deck on Laguna offers the best sunset seats in the house and an array of refreshing libations to boot. The open air, waterfront seafood restaurant overlooks the Pacific Ocean, a coveted spot for vacation vibes and after-work spirits. Slurp down some oysters and swirl a Silver Surfer tequila cocktail around in your hand as the sun casts magenta and tangerine rays on the ocean’s horizon. 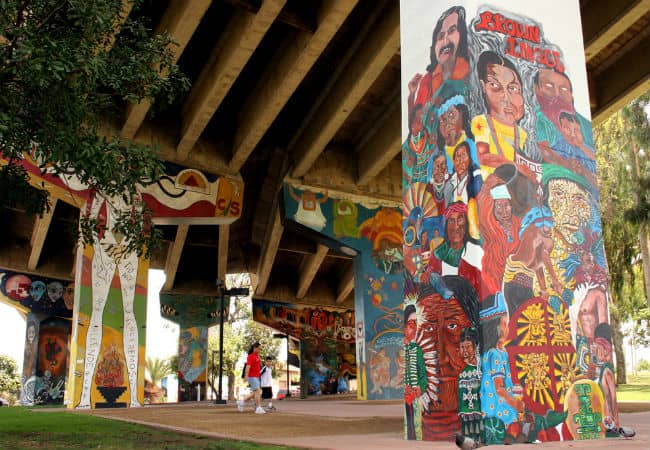 At first glance, Chicano Park may look like any other graffiti-covered underpass, but it’s actually home to the largest collection of outdoor murals in the United States. What’s more, in 1970, the park became the subject of a people’s land takeover, as the Chicano Mexicano people reclaimed the area, which was once Aztec land. Take time to honor the history embedded in this region, and you just may stumble across a traditional ballet folklorico or Aztec ceremony in session. 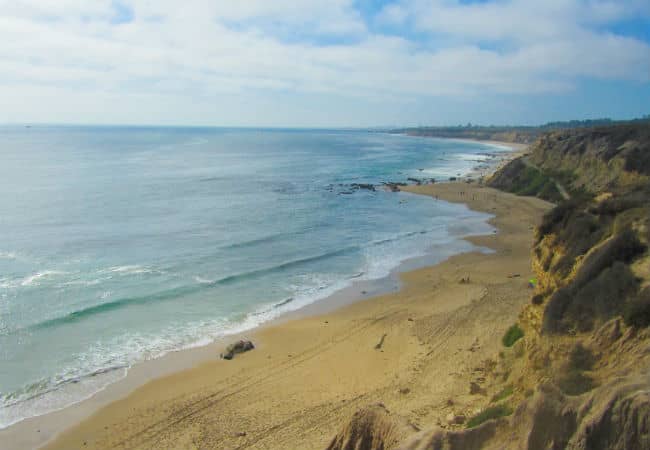 Flickr via b r e n t
If discovering the most divine stretch of sand and sea is one of your top things to do in Orange County, Crystal Cove State Park deserves the honor. From the shoreline, the gently lapping turquoise waters will have you feeling like you’ve stepped into a paradise island in the tropics. Beneath the surface, the 1,140 acre underwater park, teeming with marine life, is a treasure trove for scuba divers and snorkelers. Treat yourself afterward to elevated American pub fare at Reunion Kitchen + Drink. 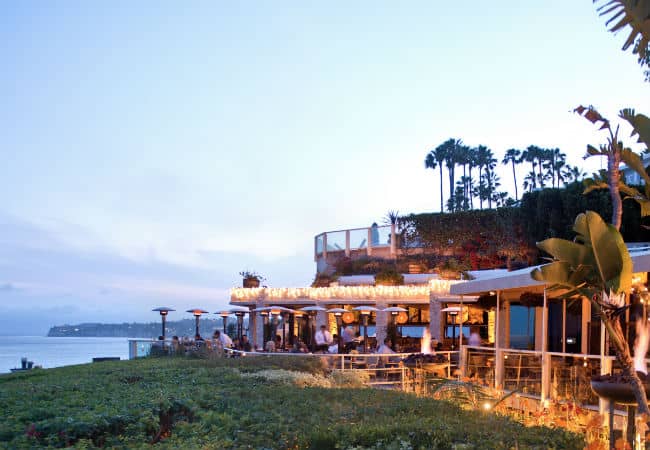 Of all the things to do in Los Angeles, reserving a table at Geoffrey’s Malibu will have you gushing for days. Strings of twinkling lights are strung around the al fresco patio as the Pacific Ocean shimmers in the distance. It’s a magical setting at this elegant Malibu restaurant, where every seat on the terrace affords a view of the rippling waves—even blankets are on hand if the sea breeze kicks up. Surf, turf, and espresso flan are just a few of the specialties that grace the elite menu. 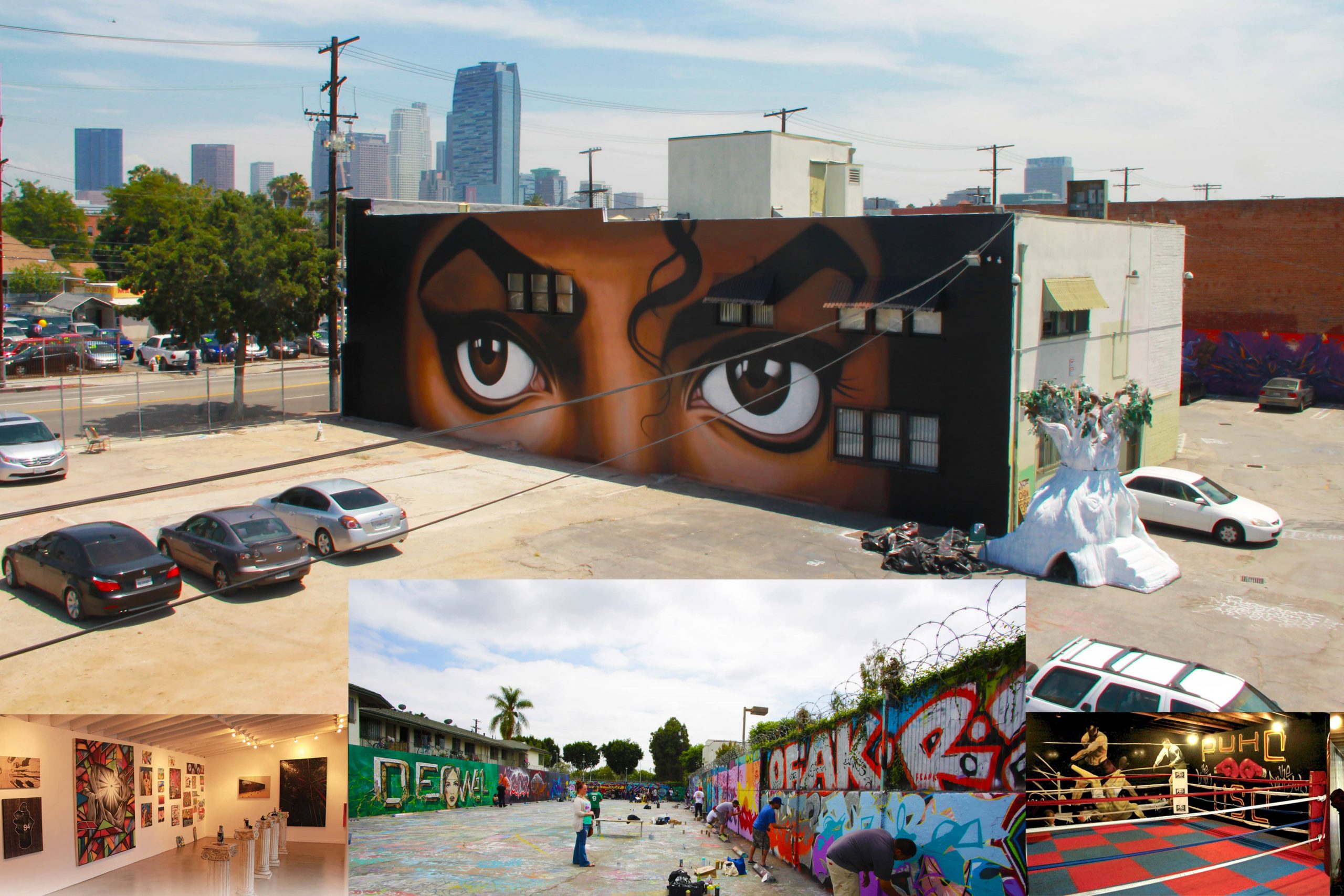 During a Los Angeles vacation, enter the aerosol art-covered walls of The Graff Lab, a graffiti haven where tagging walls is considered an art form rather than a criminal act. The urban art space in Los Angeles offers a safe canvas for artists to shake up their paint canisters and let bursts of colors spray. Explore the masterpieces or sign up to show off your own artistic street cred. The space is only open on weekends, but it’s the most colorful outdoor experience you’ll get.

Belmont Park, San Diego
At San Diego’s Belmont Park in Mission Bay, get ready to feel a devilish sense of delight as your bumper car rams into another or the sensation of your hair standing on the back of your neck as you roar down the vintage Giant Dipper Roller Coaster. This beachside amusement park will bring you back to your childhood with the kinds of rides that give you that giddy adrenaline rush you haven’t felt in years. When you’ve had your fill of thrills, head to Cannonball’s spacious rooftop patio for the best ocean views.

La Jolla Sea Caves, La Jolla
Take your seat in a kayak and glide across kelp forests and underwater canyons off the California coast. The tour guide company La Jolla Sea Cave Kayaks offers excursions to an ocean oasis where sea lions sun themselves on rocks and pelicans dive into the waves for an afternoon snack. If the water conditions are deemed safe, groups can even paddle into the sea caves, carved out by the powerful Pacific Ocean. Dolphins, leopard sharks, and fish are just a few of the creatures you may spot during your cruise on the high seas.

Joshua Tree National Park
Drive east of the rolling waves and you’ll enter the stark desert of Joshua Tree National Park, where the signature bristled yucca trees poke out of the dusty earth. Some of the best views of the Mars-like landscape are seen from above, so tie in with the Uprising Adventure Guides and clamber up the rock walls. The rock climbing tour company offers several kinds of courses, letting you pioneer your way up the rock piles to your heart’s content. For an outdoor dining experience like no other, go to nearby Pappy & Harriet’s in Pioneertown, where you can catch world-class music and American fare in an Old West setting.

Los Angeles County Arboretum and Botanic Garden, Arcadia
Step into a scene reminiscent of a Monet painting as delicate water lilies float in ponds at the Aquatic Gardens. The Los Angeles County Arboretum and Botanic Gardens are home to pristine landscapes draped in plants from Africa, Australia, and beyond. Meadow Brook Garden, surrounded by magnolias, has a backdrop of the San Gabriel Mountains, while the Herb Garden unveils medicinal and edible plant properties.

Powerhouse Park, Del Mar
Stretching out on a beach blanket with the sound of live music booming from a nearby stage is what summer nights are made of. Stake your claim of grass at the Powerhouse Park and settle in for the Del Mar Summer Twilight Concerts, which take place along the green lawn overlooking the beach below. Past lineups have included performances by musicians such as the Sensation Showband and The Mighty Untouchables.

Angels Gate Park, San Pedro
SoCal might as well be called the Land of Sunsets, but the view from Angels Gate Park really earns it some bragging rights. You’ll know you’ve arrived at this sweet spot when you catch sight of the grand Korean Friendship Bell overlooking the coast. Find your swatch of grass and wait for the sun to pull its magic over the sparkling sea. If it’s a clear day, you might even see Catalina Island off in the distance.

Whiting Ranch Wilderness Park, Lake Forest
When you imagined your Orange County vacation, you probably had images of palm trees and sandy shores in mind. While the region certainly has its fair share of seaside landscapes, when you venture to Whiting Ranch in Lake Forest, you’ll find yourself roaming through valleys dense with shady oak trees. For some even more unexpected scenery, follow the trails to Red Rock Canyon, a massive sandstone canyon, which looks like it belongs more in the Arizona desert than under the SoCal sunshine.

Historic Filipinotown, Los Angeles
Ordinarily if someone directed you to the alleys in Los Angeles, you might run the other way—but give the alleys in Historic Filipinotown and Echo Park a chance. Local gallery owner Jason Ostro kick-started the Gabba Alley Project, a street art movement to beautify the alleyways. With permission from home and business owners, Ostro partners with street artists to transform ordinary dumpsters, garages, and walls into elaborate and inspiring canvases. While you’re in town, zoom over to Park’s Finest, where the Filipino-inspired barbecue will rival the best backyard food fests you’ve experienced.

Start off your adventures with a stay in a San Diego hotel and then make your way north. Or begin with reservations at a Los Angeles hotel and cruise down the coast at your own pace. However you explore the SoCal terrain, you’re in for a treat.

How are you spending your summer in Southern California?