Summer officially is upon us, which means it’s time to slather on the sunscreen, grab a trashy novel, pour a Solo cup of rose, and hit the beach. The day after solstice also means it’s time for Expedia’s annual Flip-Flop Report—a (usually humorous) look at beach behaviors around the world.

In particular, the study looks at which country’s residents are most likely to disrobe fully, what beach behaviors are least appropriate, where the most attractive beachgoers can be found, and more.

Basically, the report is a rundown on worldwide beach gossip. Which is precisely why I love it so much.

And this year’s report certainly packs a punch. For the first time ever, the Flip Flop Report found that respondents from Austria—motherland of Arnold Schwarzenegger—are the most inclined to get naked when visiting the beach. Apparently, Austrians don’t like to just go topless; they like to get completely naked. One benefit to this approach: No tan lines! One downside: Potentially nasty sunburns.

The Austrian finish is super-exciting because in four previous iterations of the Flip Flop Report, people from Germany won or tied for first place in this particular category. In 2016, the Austrians edged their European counterparts, 28 percent to 25 percent. We Americans finished third at 18 percent.

(In case you’re wondering, the world’s most modest beachgoers are found in Asia; only 2 percent of Malaysians and South Koreans, and 3 percent of Thai and Japanese respondents have gone au natural.)

Flip Flop data indicated American respondents largely disapprove of toplessness or nudity at public beaches; an almost unbelievable 62 percent said they were “somewhat or very uncomfortable” with that level of exposure. Also, 77 percent of American female respondents said they would “never” go topless at a public beach. I have to be honest—this latter number in particular surprised me, especially because I’m not sure I agree. Again, people, I give you the benefit of nude sunbathing: No tan lines! 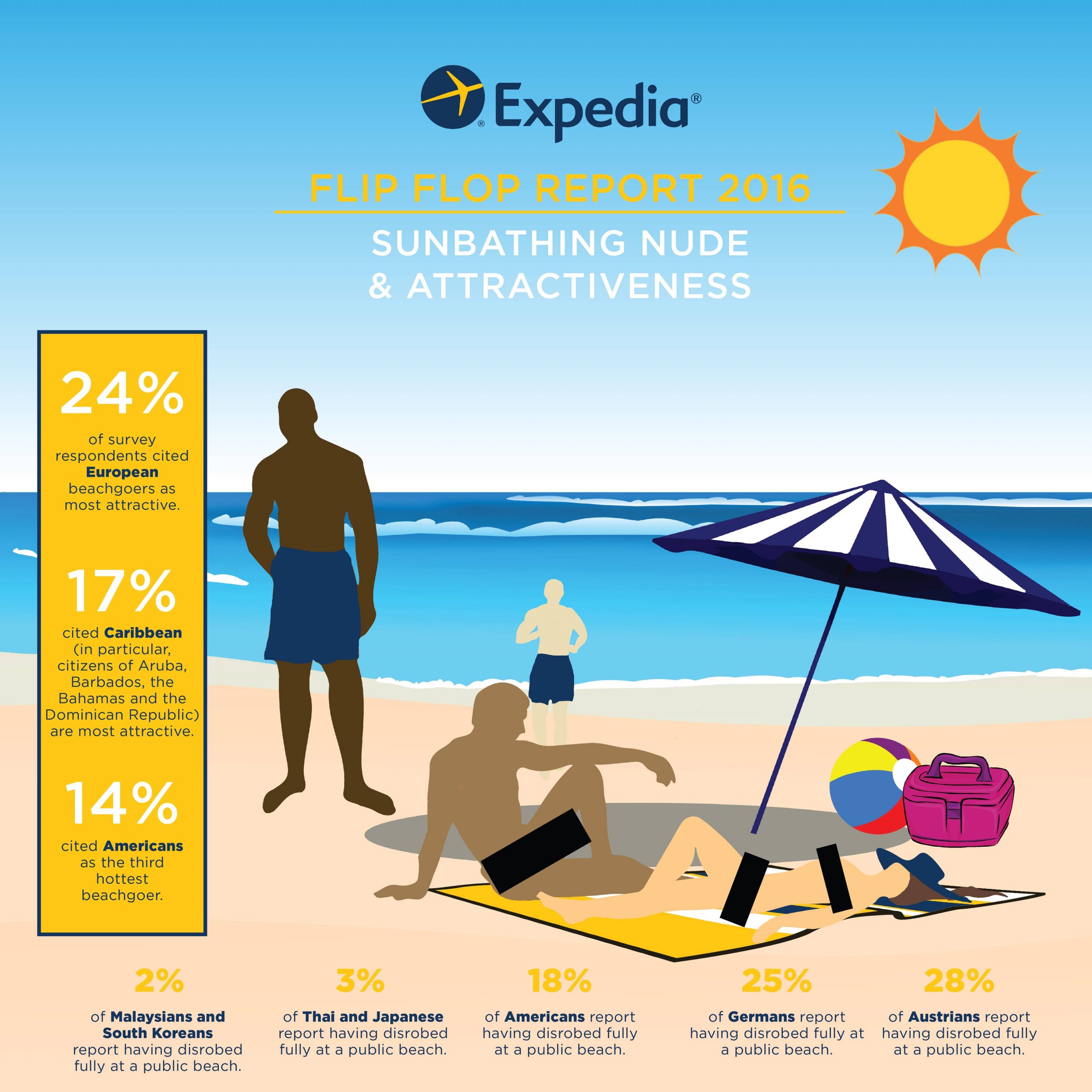 You know how Expedia publishes studies about etiquette on airplanes and roadways? Well as part of this Flip Flop Report we look at etiquette on beaches, too. Specifically, we asked respondents to gauge the most annoying beachgoer behaviors. No. 1 on the list with 48 percent of the vote: “The Slob,” a.k.a., the guy (they’re usually men) who doesn’t clean up after himself and leaves garbage on the beach.

For Americans, the other least popular beach personas were “The Inattentive Parent” at 44 percent, “The Loud Mouth” at 37 percent, “The Encroacher” at 35 percent, and “The Boozer” at 34 percent. 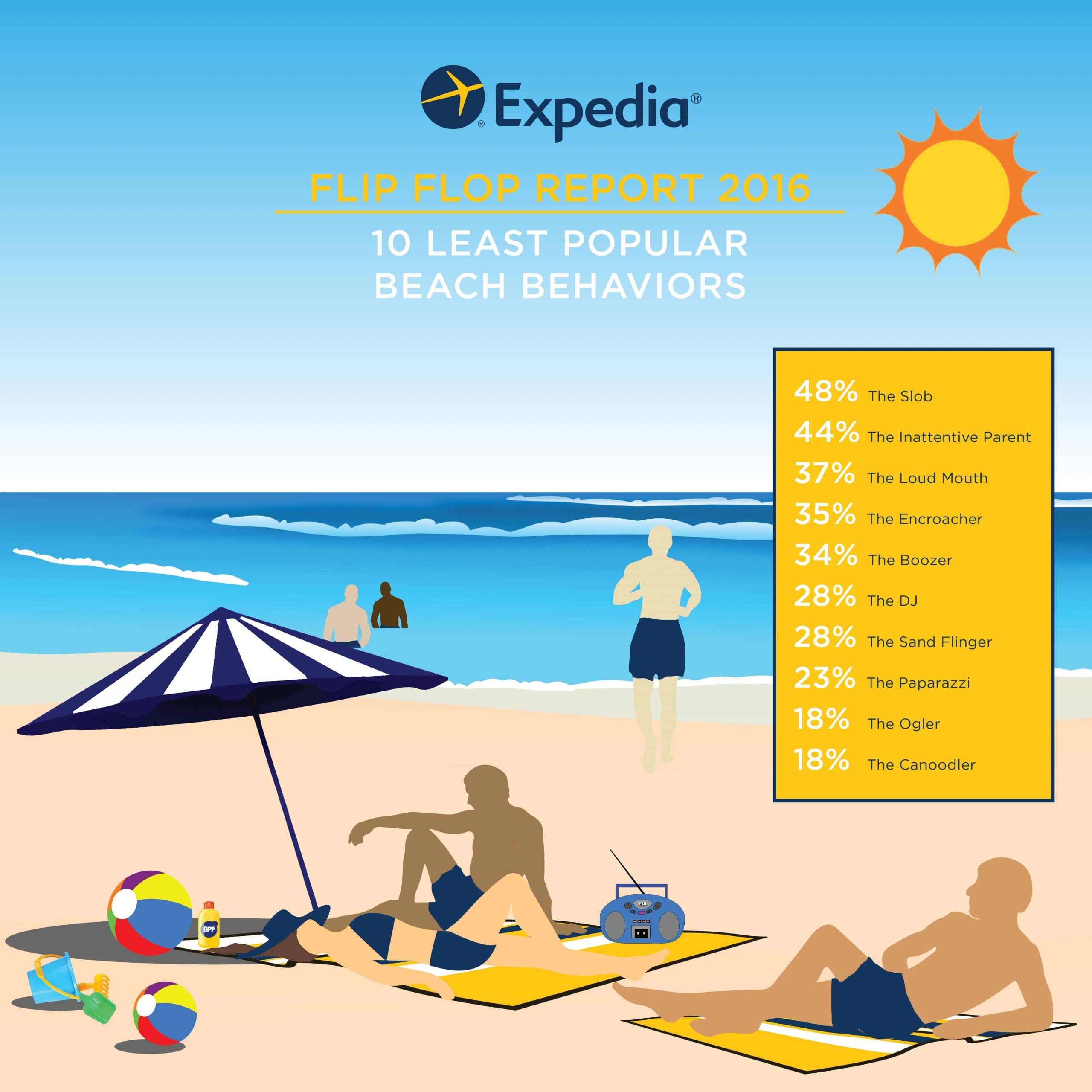 Who’s the fairest of them all?

Depending on whom you ask, Flip Flop findings indicated the most attractive beachgoers (other than moi, of course) can be found in Europe. Worldwide, 24 percent of respondents said Europeans were the hottest beachgoers, with Caribbean (17 percent) and American (14 percent) beachgoers in the mix.

Not surprisingly, American respondents were a bit self-absorbed; 46 percent of respondents from this country said the most attractive beachgoers can be found on U.S. soil, in Florida and Hawaii.

Personally, I was shocked that California didn’t crack the top two. 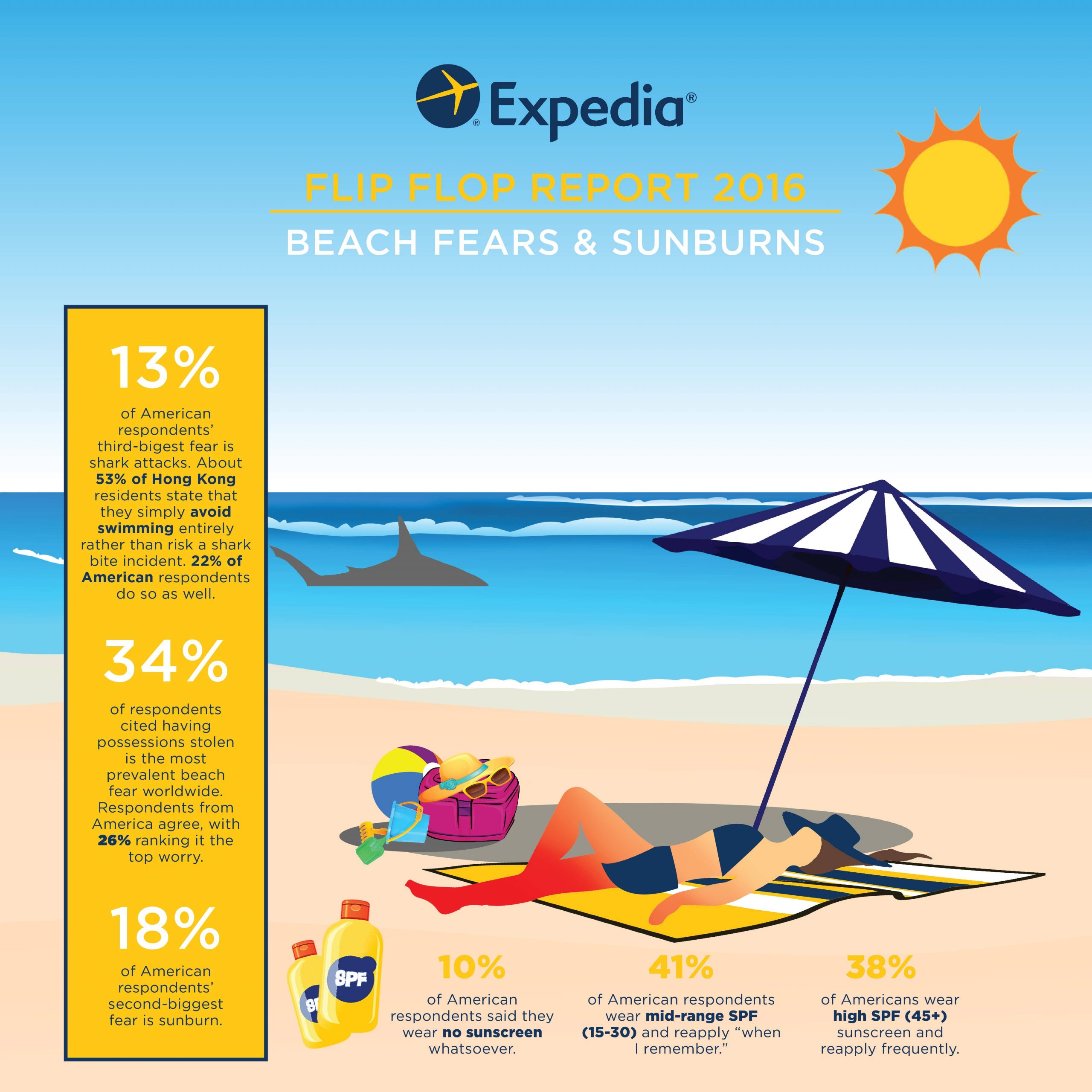 The Flip Flop Report also pulled together data on a number of other somewhat random beach-related stuff. A quick rundown:

Finally, Flip Flop findings noted that about 46 percent of Americans said they had taken a beach vacation in the past 12 months, and that Americans are the second-likeliest people worldwide to work when at the beach, trailing only respondents from India.

The data goes on and on, and you can read all of it by clicking on the full infographic here (or on the formal news announcement). If you’re feeling particularly inspired to get out and book a beach vacation, Expedia is offering exclusive deals, promotions, and package savings of nearly 20 percent every day to celebrate its 20th anniversary. For more details, visit www.expedia.com/20-years-of-expedia.

Most important, get working on that beach bod! Even if you don’t like getting naked like the Austrians, the only way we Americans will overtake Europeans for the title of ultimate beach hotties is if we keep working at it. See you on the sand!