11 of the best day trips from New Orleans 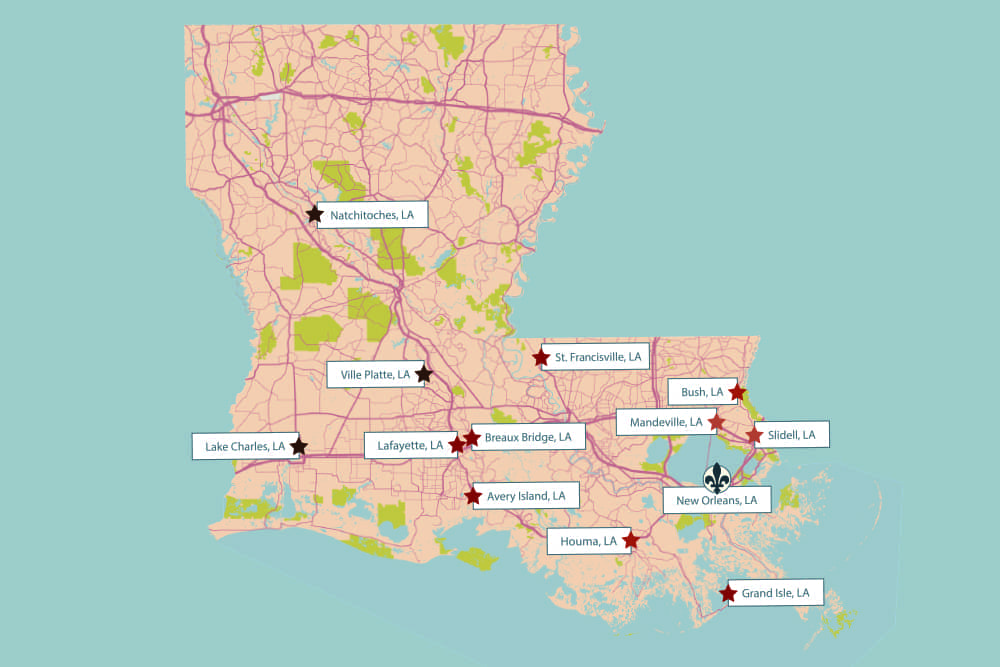 New Orleans didn’t just pop up out of nowhere. It’s part of a much bigger network of neighboring cities and communities, where the nature is thriving, the music is streaming, and the food is sizzling. Creole Country, Bayou Country, and swamp country are just a short car ride away from the bead-strewn streets of NOLA. In just a few hours, you’ll find yourself tapping your feet at fais do-dos, stepping back into the past, and maybe even dodging alligators.

After conducting a survey of 1,000 Americans, we discovered that 83.7 percent of travelers like to explore outside of the main city they’re visiting, so we determined it was time to reveal 11 destinations that are an easy one-day trip from New Orleans. What are you waiting for? Laissez les bon temps rouler!

Under an hour away*

Why go: If you’re looking for a different kind of thrill outside of the NOLA party scene

Ready for excitement beyond the Bourbon Street revelry? Adventure awaits in Slidell, where gators lurk below the bayou, less than an hour away from the French Quarter. The good times begin by reeling in trophy trout on Lake Pontchartrain with Angling Adventures of Louisiana, and blasting above the water on an Aquafly New Orleans flyboard. Better yet, venture ridiculously close to the wild boars and alligators on a Honey Island Swamp Day Tour. Between catching sight of turtles and snakes beneath the cypress trees, you might even get a glimpse of the ever-allusive Honey Island Swamp Monster—take a photo for evidence! Don’t worry, if you’re looking for something a little tamer on the outskirts of NOLA, you can find it in Slidell, too: order a scoop of Creole Cream Cheese at Old Town Slidell Soda Shop and scour the knick-knacks at the antique shops.

Why go: If you’re looking for nightlife vibes, away from the tourist traps

Yes, the Birthplace of Jazz rattles with rhythm and blues as the bartenders whip up stiff cocktails, but the nightlife doesn’t stop and end with New Orleans. Brass bands wail on stage, long into the night, in neighboring towns, like Mandeville, just across the lake from NOLA. Here you’ll find Dew Drop Jazz & Social Hall, one of the world’s oldest rural jazz halls, built in 1895, the same year scholars agree that traditional jazz started making noise. Ruby’s Roadhouse is another local joint that’s been bringing down the house since 1984. Indulge in more than just jam sessions while you’re in town—imbibe some of the local brews at Old Rail Brewing Company and Chafunkta Brewing Company. A pint of Cow Catcher Milk Chocolate Stout or Voo Ka Ray IPA, and you’ll be ready to crank up the sound.

Why go?: If you’re looking to see what Bayou Country is all about

In just a little over an hour’s drive away, you can leave behind the cobblestone streets of New Orleans for the wetlands of Houma. In the thick of Bayou Country, you’ll find yourself surrounded by marshlands, accented by shrimp boats and moss-draped trees, an enchanting sight to be sure! Do yourself a favor and experience the region’s very first tour of its kind: Annie Miller’s Son’s Swamp & Marsh Tour, which winds through the Mandalay National Wildlife Refuge. Perhaps the ultimate way to explore Houma is on a GeoTour though. After all, Houma is one of the world’s select geocache locations, where you hunt for and unlock hidden caches along the way. Before leaving Houma, add Jolly Inn to your treasure map, where you’ll discover the meaning of fais do-dos for yourself.

Why go: If you’re looking to explore (and sample!) the local harvest

Some of the spiciest and most flavor-packed cuisine comes straight from this state, but there’s plenty of goodness to be found before the ingredients even hit the gumbo bowl. Get down to the root of things in nearby Bush, where you can sample the local Louisiana crops. Keaton’s Blueberries, and Blue Harvest Farm (in neighboring Covington) invite you to grab a bucket and pick your weight in berries galore. Prefer to sample some harvest of the 21-and-up variety? Pack a picnic for a tipsy afternoon at Pontchartrain Vineyards & Winery, or plan a visit during the annual Jazz in the Vines concert series. For more fermented pleasure, toast a glass of white at LA Serendipity Vineyards and relish the grapevine-tangled landscape.

Why go: If you’re looking for a beach getaway

If your home base is in New Orleans, you’re just two hours from salty air whipping through your hair and waves splashing the shoreline. It’s too tempting to resist, huh? Make the trek to Grand Isle, where you’ll be greeted by seven miles of beaches along the Gulf Coast. Kick your shoes off and stroll along Grand Isle State Park, scanning the horizon for brown pelicans, or go kayak fishing through the marshes with Calmwaters Charter. If your timing’s right, plan to venture here during April when you can join the flocks of visitors at the Grand Isle Migratory Bird Celebration, where more than 100 kinds of feathered ones gather to rest during their journey up north. Bring your binoculars on the Grand Isle Birding Trail and listen for the music of the songbirds—bliss at its finest!

Why go: If you’re looking to add some spice to your vacation

Ready to spice up your life? Feel the heat on Avery Island, where fields of red peppers supply the zest for the hot sauce favorite: TABASCO. You may not have even known Tabasco ice cream and Tabasco soda existed, but now’s your chance to sample the good stuff during a tour of the TABASCO factory and museum. Discover the story behind the zingy red condiment, and then dare your taste buds to brave a meal at the TABASCO Restaurant 1868. When it’s time to beat the heat, romp around the semitropical Jungle Gardens along the Bayou Petite Anse—seek some shade under the willow-like limbs of Southern live oaks and wander under the whimsical Wisteria Arch. With your pockets filled with miniature bottles of hot sauces and your tongue still sizzling, you’ll know you’ve done Avery Island justice.

Why go: If you’re looking to uncover the past

Two hours in the car is nothing when you discover just what’s waiting for you in time-honored St. Francisville. The past is perfectly persevered here, where you can uncover its allure at historical stops in town, from the Freyhan School to the Afton Villa Gardens. Tour the WFP Historical Museum and read the tombstones at the Locust Grove State Historic Site. Intrigued by more mysterious elements of the past? Take a lap of the Rosedown Plantation, which is said to be haunted by its original owners, or listen for the sounds of a crying woman at Myrtles Plantation, regarded as one of the most haunted locales in the nation. Your time here may be spooky and a little kooky, but that’s half the fun!

Why go: If you’re looking to get an authentic taste of Louisiana

Allow yourself to follow the scent of crawfish etouffee and boudin blanc to Breaux Bridge and nearby Lafayette, where Creole and Cajun cooking is the main course. They don’t call Breaux Bridge the Crawfish Capital of the World for nothin’, so get ready to start peeling those critters! Breaux Bridge has as long history of serving up crustaceans on the menu, and the delicacy has become such a treat, the town has hosted the annual Crawfish Festival since 1960. Meanwhile, day trips from New Orleans to Lafayette will bring you to another LA staple: boudin. Here you can explore the Boudin Trail, sampling the sausage links, from Johnson’s Boucaniere to Earl’s Cajun Market. And whatever you do, don’t forget to get crackin’ on some cracklin’!

Why go: If you’re looking to embrace the great outdoors

New Orleans has a lot of allure, from its architecture to its history, but when you’re craving some fresh air and open space, Lake Charles is where you belong. Celebrated for its Creole Nature Trail All-American Road, this region is celebrated as one of the nation’s top birding destinations, where you can spot more than 400 kinds of avians and maybe even an alligator along the way. Visit Lake Charles, where 619 square miles of water in the area means it’s prime time for some fishing! Scout out some crawfish, cast a net for some shrimp, and reel in some bass to put dinner on the table. And as long as you’re exploring, soak up some vitamin D among the lagoons and hardwood forest at Sam Houston Jones State Park.

Why go: If you’re looking to experience true Louisiana traditions

There are some deep-seated Louisiana traditions and you’ll only get a sneak peek if you’re willing to venture outside the tourist hub. The journey to Ville Platte will be well worth the trek when you’re welcomed by the Swamp Pop Museum, home to the best memorabilia of the Acadiana region. You’ll soon realize why Ville Platte is known as the Smoked Meat Capital of the World, as the city hosts Le Festival de la Viande Boucanée (Smoked Meat Festival), where the cook-off competition is strong. Come late summer and early fall, you’ll face carnivals and parades at the Annual Cotton Festival and the Louisiana Tournoi, a jousting ritual that dates back to the 1880s. Now that’s how they do Louisiana traditions!

Why go: If you’re looking to discover true Creole country

You’ll be doing this area a severe disservice if you don’t make the journey over to Natchitoches, the oldest settlement in the Louisiana Purchase. Established in 1714, this city has some stories to tell, and you can hear them for yourself as you visit the Magnolia Plantation in the Cane River Creole National Park, and swing by nearby Melrose Plantation, which was built and owned by free slaves. You’ll also want to take a gander at Kaffie-Frederick General Mercantile, the state’s old general store and a must-see. However, perhaps the best way to get a taste of Creole country in Natchitoches is with an order of meat pies at Lasyone’s and a block of goodness from Louisiana Purchase fudge shop.

*Driving times depend on traffic and the specific route taken

What are your favorite places to visit near New Orleans?

Have you reached your tripping point?

Easy ways to deal with your 'tripping point'

Travel and Mental Health in 2020

Taking some simple actions to improve your own mental wellness, as well as the mental health of your loved ones and members of your community

You don’t have to travel to Europe for an authentic castle experience. There are a number of beautiful palaces across the US to visit.

Discover the best weekend getaways near Rome for a relaxing escape from the city on your vacation.

Discover the best day trips from Boston for a fun-filled vacation with friends, family or on your own.