28 of the world’s most extraordinary beaches

Your salty skin after a dip in the sea, the warmth of the sand heated by the sun, and the sticky breeze tousling your hair—it’s practically in our DNA to be drawn to the seaside. Of course, almost any beach can captivate our senses, but then there are shorelines that are undeniably magical.

With summer on the horizon, we set out on a quest to discover the best beaches around the world, the kind that leave you longing for sea shells and sunset strolls. With so many heavenly coastlines, it wasn’t easy to narrow down the choices, but we picked beaches based on their quirky features, breathtakingly divine vistas, and memorable characteristics. We even polled 1,000 travelers to get their expertise on the incredible beaches they’ve come across during their travels. You’ll find that some of these coastlines have unconventional structures and colored sand, while others are the epitome of your own deserted island. Whether you’re craving a secluded oasis or party hardy vibe, our list includes some of the top beaches to visit in the world. 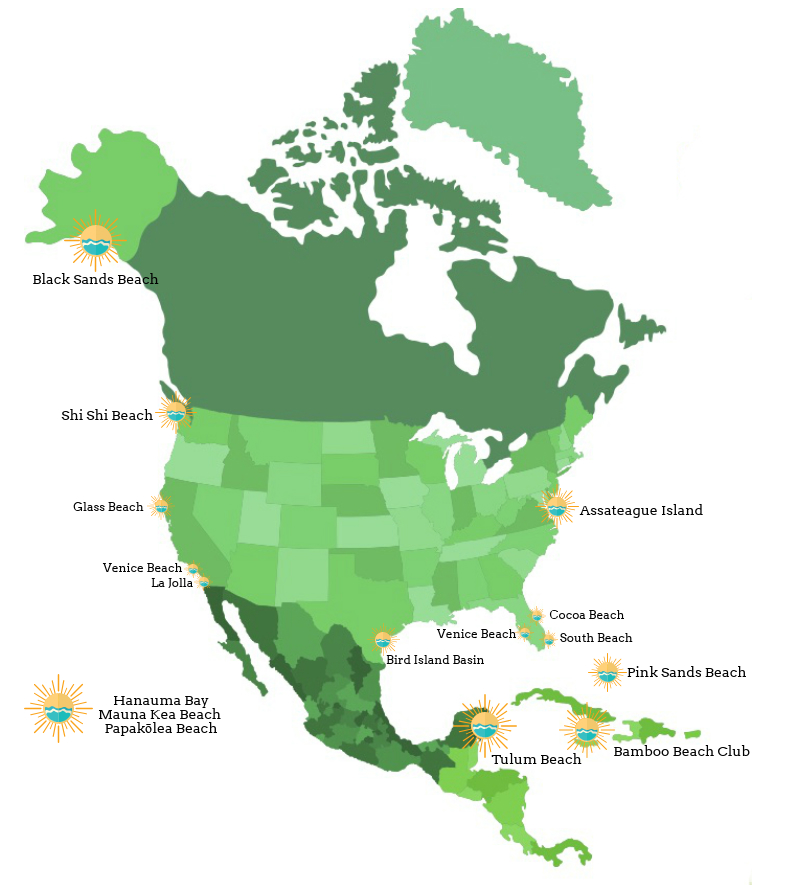 Kayak along the shores of Black Sand Beach, and you’ll feel humbled as exquisite mountains and glaciers engulf your vision. As you embark on the black sand, search for chunks of icebergs that have drifted to shore and find a good spot to pitch a tent for the night.

A hike through rainforest and coastline will deliver you to the untamed shores of Shi Shi Beach, where gnarled driftwood and distant sea stacks give it wild appeal. Meander toward Point of Arches to see the rock formations up close and search for sea life among the tide pools.

It looks like confetti is strewn across the shores of Glass Beach, where the sand is a combination of pebbles and sea glass. The beach site was once a trash dump, and the glass bottles have since washed up in the form of countless colorful pieces. Enjoy, but don’t take (it’s illegal to remove any glass from the shore).

Seagulls and sandpipers aren’t the only wildlife you’ll see at this seaside escape—the island is home to more than 300 wild ponies that roam freely on the 37 miles of beaches. If you’re lucky enough to be graced by the presence of these majestic animals, admire from afar, and keep your distance.

Of the most unique beaches in the world, California’s Venice Beach is a strong contender thanks to its quirky boardwalk scene, where you’ll marvel at all walks of life, from bodybuilders and fortune tellers to break dancers and artists. Beyond the vibrant graffiti and skateboarding tricks lie the chilly Pacific Ocean and fiery sunset on the horizon.

Many travelers picked La Jolla Cove as a favorite beach—one look over the rocky cliffs and into the azure water, and you too will see the allure. Above water, husky sea lions sun themselves on the rocks, while below the surface, the La Jolla Underwater Park is teeming with majestic sea life. Kayak above the blue water or venture down under with your scuba gear.

Cocoa Beach was a popular choice among travelers surveyed, and it’s no surprise. Not only is this stretch one of Florida’s coveted surf spots, but it’s also one of the best places to watch rockets launch into space from the nearby Kennedy Space Center. Not many beaches can claim that spectacle!

Proudly referred to as the Shark Tooth Capital of the World, Venice Beach’s sandy shoreline is littered with fossilized shark teeth from millions of years ago. It’s not uncommon for the lucky beachcomber to score a massive Megalodon tooth—they’re often bigger than your palm!

It’s not just the sun and sand that make South Beach so hot. Known as one of the sexiest beaches on the planet, SoBe is famous for its party vibes, wild nightlife, and sizzling shoreline with white sand and turquoise waters.

Fall asleep to the lull of lapping waves when you camp on the serene shores of Bird Island Basin. This peaceful retreat has earned the reputation as one of the best flat water sailing sites in the nation, so don’t forget your gear!

Of all the unique beaches, Pink Sands Beach with its salmon-hued coast is extraordinary. The shells of red foraminifera, which are microscopic organisms, mix with pieces of coral to give the sand its peculiar blush-colored tint.

The inviting water and swaying palm trees are enough to lure you to Bamboo Beach Club, but the cultural entertainment is what will have you sticking around for some rum punch and local jams. Formerly known as Reggae Beach, Bamboo Beach acts as a stage for local performers showcasing their music, dance, and acrobatic talents.

Tulum Beach, with its ice-blue waters and powdery white sand, is wildly appealing, but its history makes it even more intriguing. The sandy stretch sits right at the base of the ancient Tulum Ruins—tour the old Maya settlement and stand on the shores where Mayan ships once docked.

Where can I find an amazing beach, you ask? Hanauma Bay! While the crescent-shaped coastline and turquoise water are undeniably beautiful, what makes this spot so special is that it’s actually the floor of an ancient volcanic crater that collapsed thousands of years ago. Bring your snorkel gear to see what treasures exist below the sparkling crystal surface.

We trusted our survey participants to know about the most unique beaches to visit, and that’s how we discovered the amazing Mauna Kea Beach. Also known as Kauna’oa Beach, this coastline offers incredible opportunities to admire wildlife. Snorkel the coral reefs by day, and by night, look for the manta rays that search for plankton under the local hotel’s floodlights.

It’ll take a 2.5-mile hike to arrive at the unique green sands of Papakōlea Beach, but the natural wonder is so worth the trek. The grass-like sand gets it color from olivine crystals that washed ashore from the eroding cinder cone off the coast. 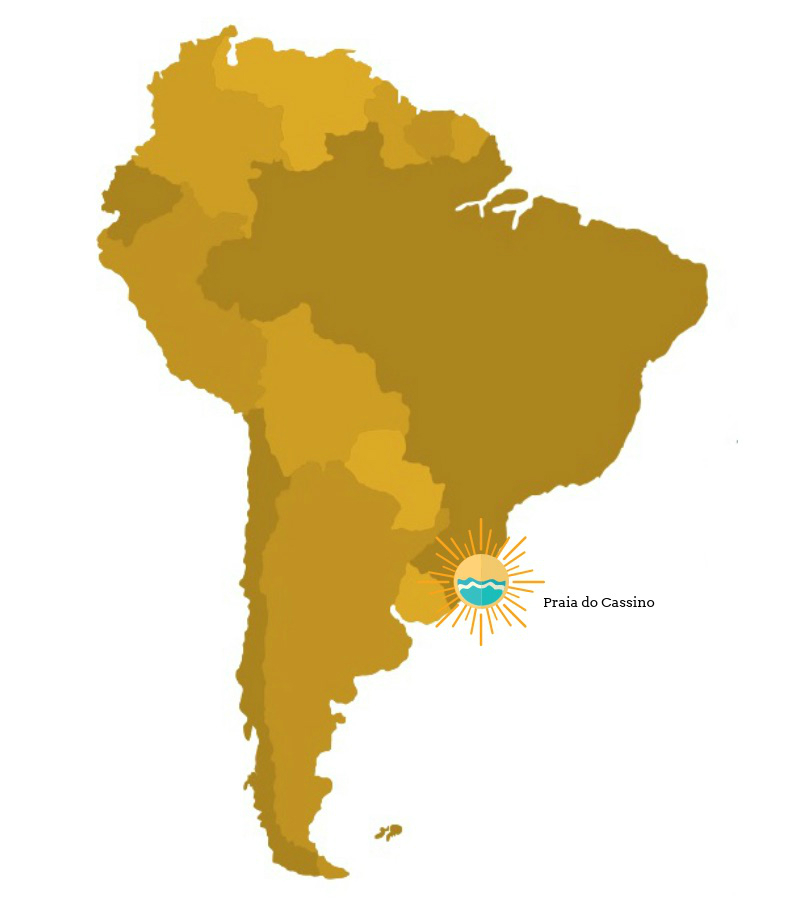 At Praia do Cassino Beach, you’ll see nothing but miles of supreme sand and sea, as the “Guinness Book of World Records” dubbed this stretch the longest beach on the planet. Take a stroll along this sun-soaked coastline and you’ll never run out of ocean vistas. 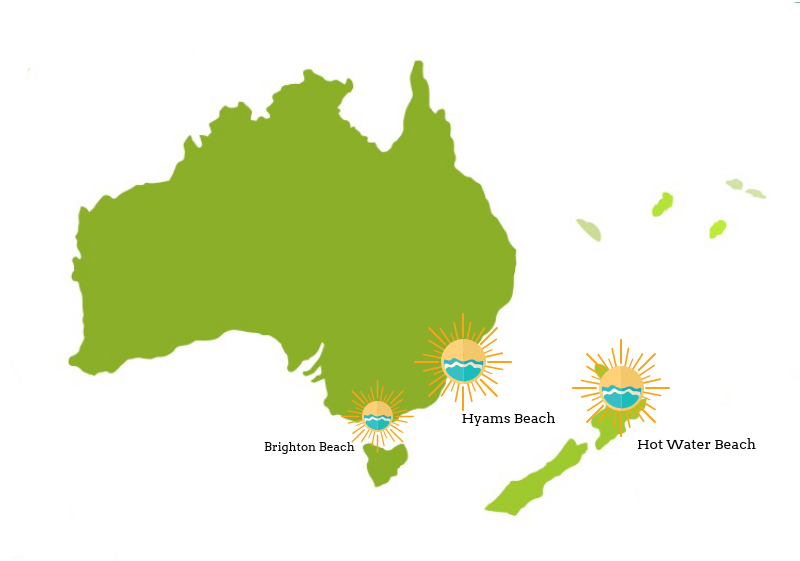 The sand at Hyams Beach is blindingly white as it shimmers and catches the light of the sun. Determined the whitest sand beach by the “Guinness Book of World Records,” this sugary oasis is a slice of paradise on the shores of Jervis Bay.

On the shores of Brighton Beach, 82 uniquely painted bathing boxes stand in a row, harking back to Victorian times. The only thing to possibly outdo the colorful cabanas is the view of the Melbourne skyline shimmering in the distance.

Hot Water Beach is your own spa retreat. When the tide is low, dig a hole in the sand near the water’s edge, exposing volcanic-heated mineral water below the surface. Trust us, it feels divine when the chilly ocean water spills into your personal thermal bath! 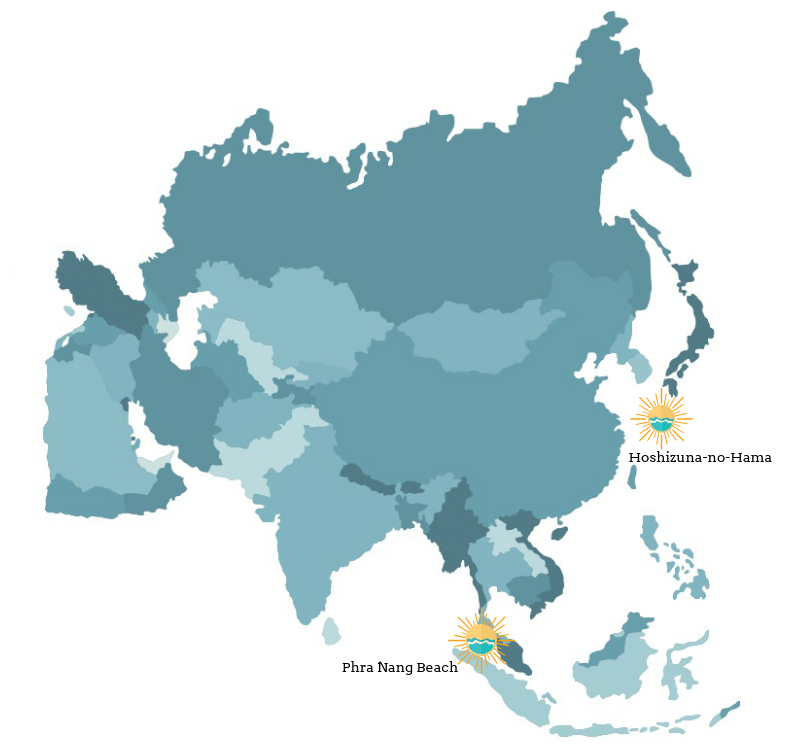 At first glance, Hoshizuna-no-Hama is a lovely coastal destination, but look a little closer and you’ll see something extraordinary: the grains of sand are shaped like stars. The curious sand is actually the exoskeletons of Baculogypsina sphaerulata, single-celled organisms that have been stranded on the shore.

Arguably one of the best secluded beaches, Phra Nang Beach is a tropical oasis only accessible by longtail boat. After a dip in the crystal waters, venture to the caves to find a shrine dedicated to a mythical sea princess. 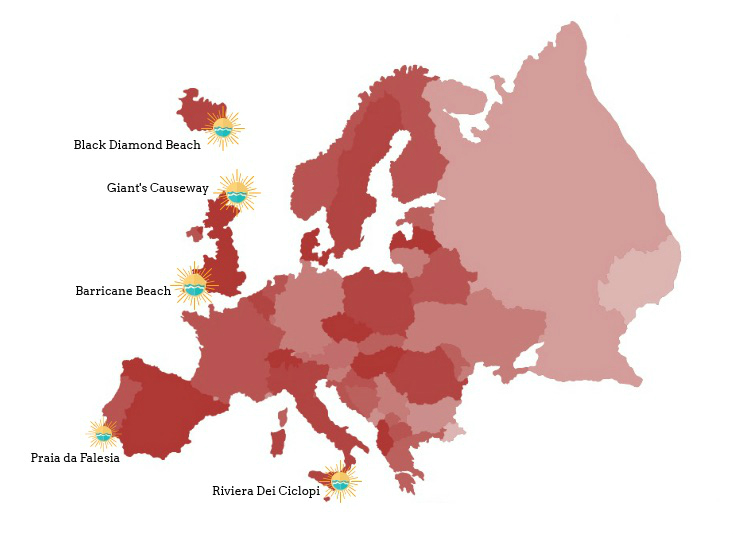 Within the Jökulsárlón Glacial Lagoon, you can’t miss the magical Black Diamond Beach. Perhaps one of the top unique beaches on earth, it not only has black sand, but it’s littered with chunks of ice broken off from the nearby Breiðamerkurjökull glacier. The ancient ice sparkles and catches the sunlight against the black sand; a mystical scene to be sure.

The coast of North Devon is perhaps an unlikely place to see tropical sea shells, but it’s along Barricane Beach where you’ll find cowries on the shore, swept all the way from the Caribbean. When you’re not combing for exotic shells, search for fossils in the morte slate rocks.

The vibrant beachscape of Praia da Falesia is one you’ll remember forever. Here the sea cliffs are dramatic shades of red and orange, laden with lush, green pine trees, complementing the azure waters of the Atlantic Ocean.

Black pillars of solidified lava jut out from the ground along the coast of the Cyclops Riviera, giving way to stories of mythical proportions. Some say the angry cyclops Polyphemus threw the stones into the sea after Odysseus blinded him, while others believe he killed Acis with one of the boulders in a jealous fit of rage. 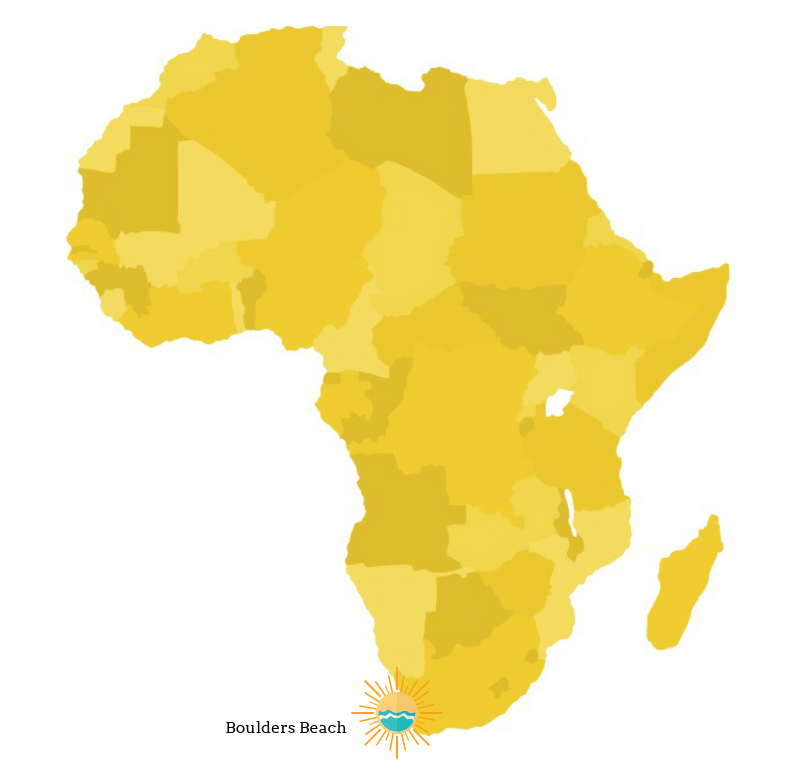 As soon as your feet touch the sand at Boulders Beach, you’ll realize how the cove got its name. While the huge rock formations on the shore are undoubtedly magnificent, the local colony of waddling African penguins are what really steal the show.

What are the most exotic beaches you’ve explored?

Everything You Need to Know About Virginia Beach Boardwalk

A guide to Virginia Beach Boardwalk