Explore > Interests > Animals > The 30 most beautiful towns in America

The 30 most beautiful towns in America

Mirror, Mirror, on the wall, which city is the fairest of them all? While it’s impossible to objectively tell you which destination is the prettiest in the land, we did find 30 of the most beautiful towns in America.

Some places stood out for their tranquil vistas, and others made an impression with their enchanting historic districts. Exquisite architecture, natural charm, and a little je ne sais quoi earned these places a spot on the pretty list. We covered beautiful small towns in the USA, but we couldn’t resist spotlighting some villages, larger-scale cities, and even islands in the nation, too. 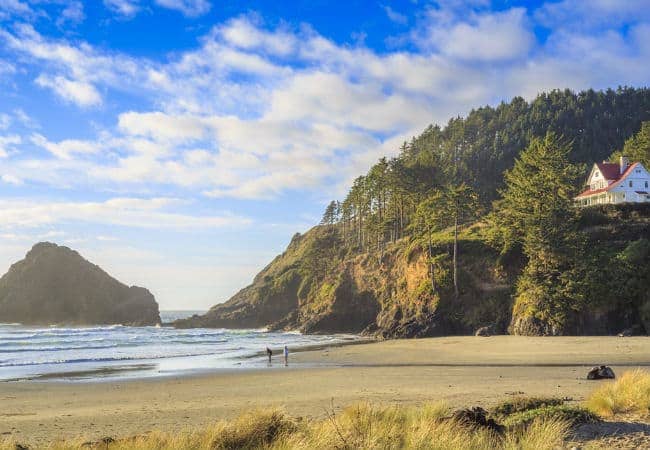 Everyone admires Oregon’s lush, green forests, but there’s certainly something alluring about the state’s rugged coastline. Sand dunes and rolling waves border the western edge of Florence, an attractive waterfront town at the mouth of the Siuslaw River. The area is surrounded by scenic vistas, from the nation’s largest sea cave, packed with sea lions, to the aptly named Hobbit Trail, a tree-canopied hike reminiscent of Middle Earth. 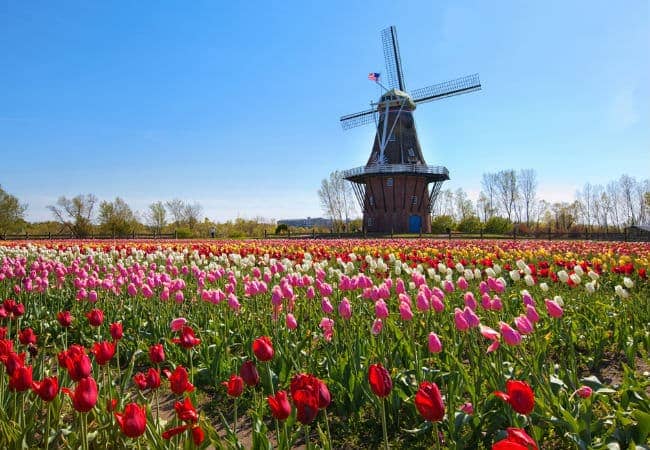 Holland’s magnificent tulips certainly helped this city seal the second spot. Each spring, roughly 4.5 million tulips blossom around the city in celebration of the annual Tulip Time Festival. Hundreds of flower rows streak this western Michigan city, which is decorated in traditional Dutch architecture, reflecting its European heritage. And to further up its aesthetics, Holland rests on the eastern shore of Lake Michigan, so say hello to blissful beaches and lakefront sunsets. 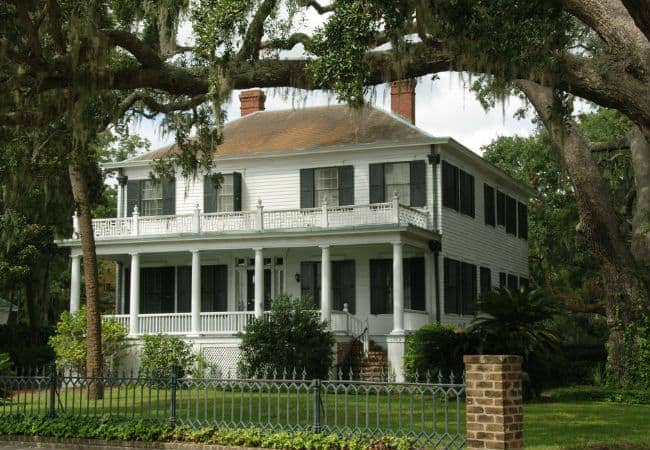 Beaufort is the kind of city that is best explored from the seat of a horse-drawn carriage; trot under the moss-covered live oak trees and circle around the antebellum mansions. Reminders of the past abound in the state’s second oldest city—its elegant historic district even features remnants from colonial times. As for natural beauty, Beaufort is situated among the Sea Islands, surrounded by marshland—perfect for sunset kayak tours and fishing charters. 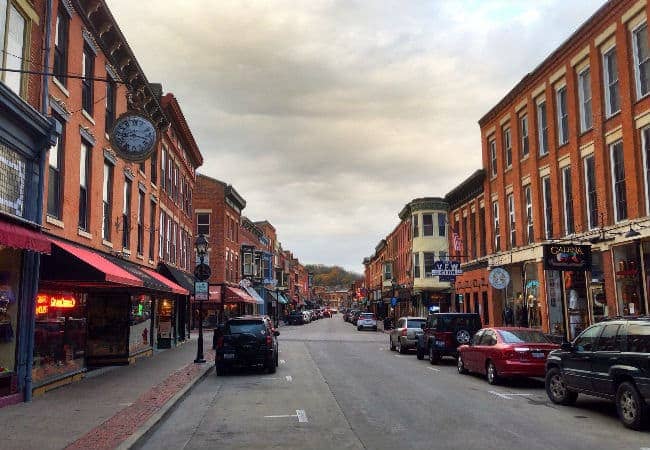 Flickr via Wesley Fryer
Though Galena is the largest city in the county, it preserves a quaint, small-town vibe. The town’s friendly and humble Main Street will remind you of the seemingly long-gone days of borrowing sugar from your neighbor. The Midwestern town sprawls out on the rolling countryside and along Galena River, a setting that is even more picturesque when you view it from above in a hot air balloon ride. 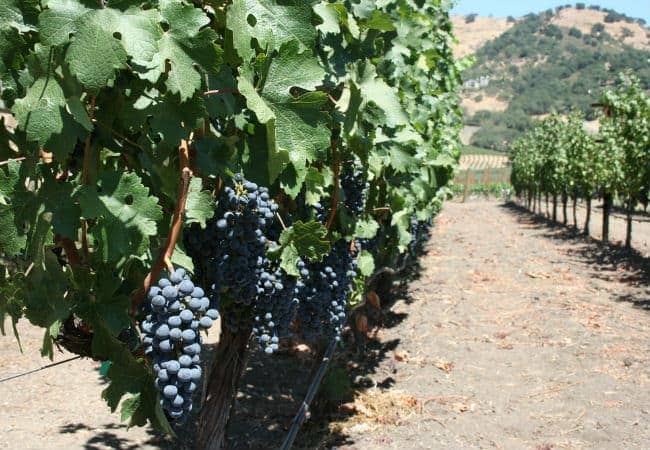 Flickr via Jill Clardy
California isn’t all sand and sea. In fact, the vineyards of Yountville look more like the French countryside than the quintessential Cali seascape. This stretch of wine country in Napa Valley is just begging for you to hop on a bicycle and get lost in the grapevines. And, as an added perk, the Yountville Mounts shield the town’s patchwork landscape, creating the ideal conditions for divine Cabernet Sauvignon. 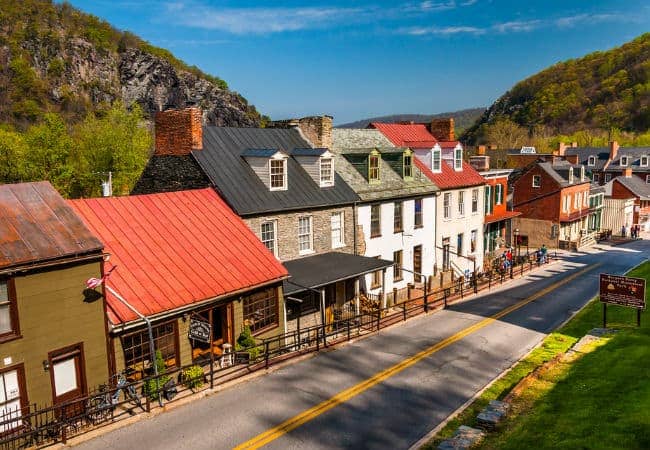 Harpers Ferry is unique in that it’s situated where West Virginia, Virginia, and Maryland meet, and where the Shenandoah and Potomac Rivers combine. The scenic junction, encompassed by the leafy Harpers Ferry National Historical Park, has been called “the most painted town in America.” Meanwhile, the neighborhood is filled with historic treasures, as it was not only the site of John Brown’s raid, but also where Stonewall Jackson trained his famous brigade. 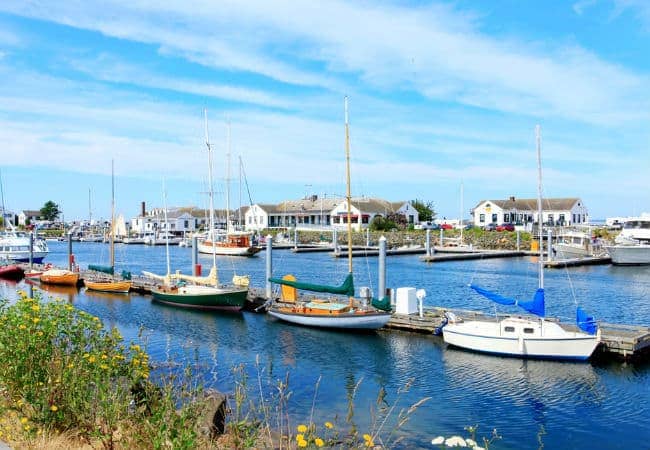 Saltwater meets woodlands in this seaside getaway, which is one of only three Victorian seaports in the nation. With its handsome old-fashioned buildings and mansions, the waterfront town could easily be mistaken for a charming New England village. That is, if it weren’t for the Douglas-fir trees that give away the city’s western roots. 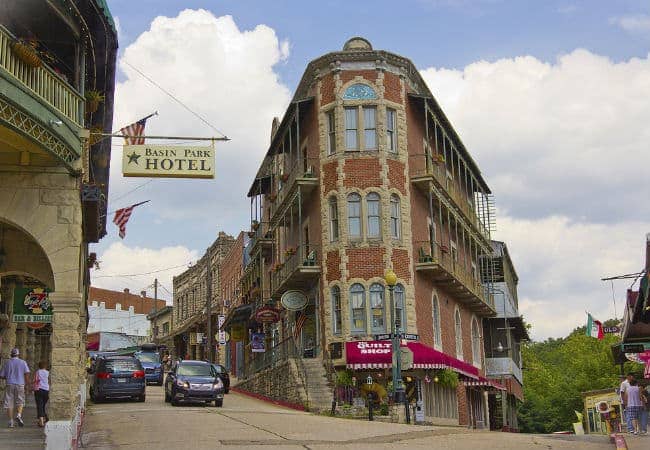 Flickr via Doug Wertman
This northwestern Arkansas city with Victorian flair has earned itself the nickname “The Little Switzerland of America.” Nestled in a valley in the Ozarks, Eureka Springs is a steep alpine village with windy streets that follow the natural curvature of the rugged landscape. The darling town is dotted with cottages and manors, surrounded by lakes and rivers—without a single traffic light in sight. 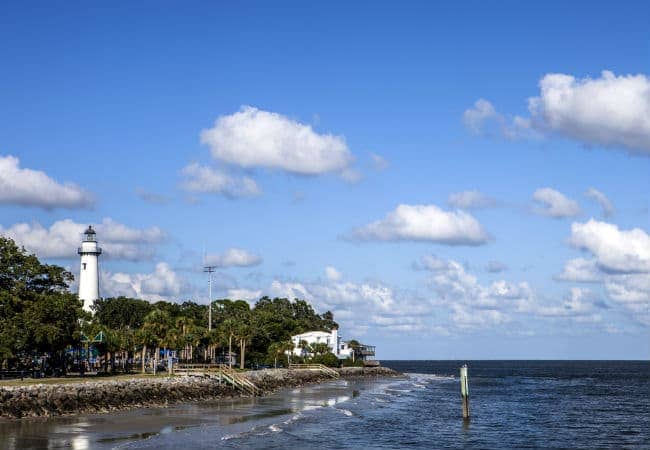 St. Simons Island has an au naturel appeal. Beaches border the barrier island’s eastern coastline, as thick marshes spread out along its western side. Among the tidal creeks and river shorelines, ancient maritime forests filled with Southern live oaks adorn the mainland. In addition to the island’s native beauty, there are several manmade constructions that exude their own eye-catching qualities, such as the 1820 Christ Church and the 1872 St. Simons Island Lighthouse. 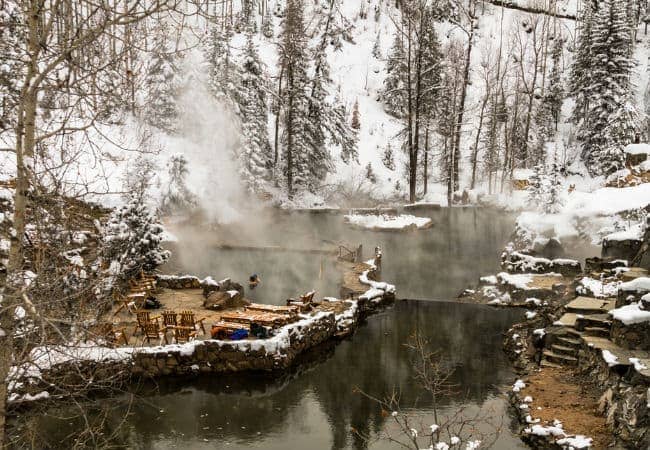 Thanks to the 150 hot springs, 3 Colorado State Parks, and 2 ski resorts around this mountain town, Steamboat Springs has a lot going for it in the rustic beauty department. The Yampa River babbles along the banks of downtown, while the nearby steamy Strawberry Park Hot Springs place you in a serene natural pool among an aspen grove. And trust, the backdrop of the ski slopes is really something you’d consider writing home about.

With its vacation roots dating back to the mid-18th century, Cape May is one of the nation’s oldest seaside resorts. The charming historic district is positioned along the southern tip of the peninsula, where the Atlantic Ocean merges with the Delaware Bay.

This waterfront village borders the Patuxent River. Head to the Riverwalk and time it perfectly to watch the sun melt behind the sprawling Governor Thomas Johnson Bridge and into the horizon.

The Kenai Fjords National Park is practically located in Seward’s backyard, which means the city’s landscape is decorated with epic glaciers, sheets of ice fields, and strings of snowy mountain ranges.

Venture to Hawi, the Big Island’s northernmost town, and discover the lush, foliage-covered cliffs that tower over the blue ocean waves. Does a tropical paradise get much better than this?

It’s said that the early German settlers chose to colonize Hermann because of its similarities to the Rhine Valley. Today, the historic German buildings are still a part of downtown, while thriving vineyards line the hillside.

Southwest of Bar Harbor, this picturesque town resides on Mount Desert Island, which was carved out and formed by glaciers thousands of years ago. Beeline to Acadia National Park to see the uniquely “bald” summits in all their glory and the oceanic views, too.

This peaceful village juts out into Lake Erie. During summertime the pretty shoreline is buzzing with boats, and then a sense of calmness comes with winter, as a layer of snow settles on the frozen lake.

Skaneateles’ rolling farmland, rugged cliffs, and placid lake are just a few of the aesthetically pleasing elements that make up this town’s natural finesse. Visit during autumn and marvel at the colorful foliage that spans the region.

Hand-painted murals add a splash of color to this already vibrant town in southwestern New Mexico. As the gateway to the Gila Wilderness, Silver City is surrounded by high desert in the south and mountain ranges to the north.

Lewes is located at Cape Henlopen, where the Delaware Bay connects with the Atlantic Ocean. Known as “The First Town in the First State,” Lewes features beach stretches, peaceful bird sanctuaries, and marshy nature trails.

Bayfield is an aquatic town that hugs the southern shores of Lake Superior. In the winter, dramatic icicles form on the Bayfield Ice Caves, and the regions’ vivid orchards blossom with apples, berries, and pears during the warmer months.

This quaint southern gem is nicknamed the “Bed and Breakfast Capital of Louisiana.” In addition to an abundance of regal homes and elegant inns, the historical region is dotted with antebellum plantations, southern magnolias, and Creole structures.

Stretching along the Mystic River, this town was a prominent 19th-century seafaring village, but even today it shows signs of its nautical past. Check out the fleet of historical vessels docked at Mystic Seaport for a glimpse into the area’s maritime roots.

This region off the Rhode Island coast is where your summer vacation begins. Towering sea bluffs, 17 miles of beaches, and more than 365 ponds and natural springs characterize this Americana island, which is completely void of traffic lights and big chain companies.

If Virginia is for lovers, Damascus is for nature lovers. This small town is your portal to the great outdoors. Tucked in the Blue Ridge Mountains of southwestern Virginia, Damascus is known as a “trail town,” thanks to its vast assortment of wilderness and heritage trails.

Seated in the Silver Valley, this mining town really shines, as every single building in downtown is listed on the National Register of Historic Places. From the main drag, look up and eye guzzle the mountain hills, which are covered in thick rows of tall, pointy pine trees.

While Montpelier’s parks, filled with sugar maples and hemlocks, are stunning year-round, a visit during the fall is nothing short of spectacular. Amble around the State House and Hubbard Park, as the crimson and amber leaves envelop the New England town.

The historic town of Jim Thorpe, with its Victorian structures, is engulfed by the Pocono Mountains. The whitewater rapids of Lehigh River end here, while scenic nature hikes snake their way around the backcountry.

What are the most charming towns in America that didn’t make the cut?